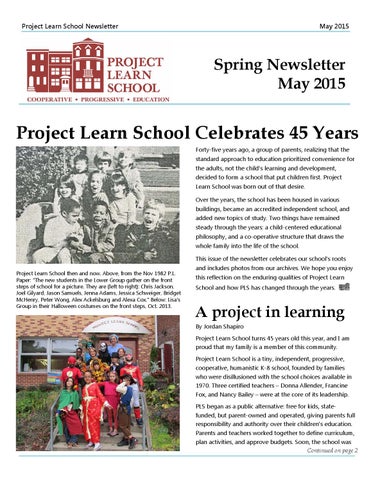 Project Learn School Celebrates 45 Years Forty-five years ago, a group of parents, realizing that the standard approach to education prioritized convenience for the adults, not the child’s learning and development, decided to form a school that put children first. Project Learn School was born out of that desire. Over the years, the school has been housed in various buildings, became an accredited independent school, and added new topics of study. Two things have remained steady through the years: a child-centered educational philosophy, and a co-operative structure that draws the whole family into the life of the school. This issue of the newsletter celebrates our school’s roots Project Learn School then and now. Above, from the Nov 1982 P.L. Paper: “The new students in the Lower Group gather on the front steps of school for a picture. They are (left to right): Chris Jackson, Joel Gilyard, Jason Samuels, Jenna Adams, Jessica Schweiger, Bridget McHenry, Peter Wong, Alex Ackelsburg and Alexa Cox.” Below: Lisa’s Group in their Halloween costumes on the front steps, Oct. 2013.

and includes photos from our archives. We hope you enjoy this reflection on the enduring qualities of Project Learn School and how PLS has changed through the years.

A project in learning By Jordan Shapiro

Project Learn School turns 45 years old this year, and I am proud that my family is a member of this community. Project Learn School is a tiny, independent, progressive, cooperative, humanistic K-8 school, founded by families who were disillusioned with the school choices available in 1970. Three certified teachers – Donna Allender, Francine Fox, and Nancy Bailey – were at the core of its leadership. PLS began as a public alternative: free for kids, statefunded, but parent-owned and operated, giving parents full responsibility and authority over their children&#39;s education. Parents and teachers worked together to define curriculum, plan activities, and approve budgets. Soon, the school was Continued on page 2

May 2015 A project in learning; Continued from page 1

Project Learn School is an independent cooperative school for students in grades K-8. Situated in the historic Philadelphia neighborhood of Mt. Airy, PLS maximizes the many resources available in a dynamic urban setting. At Project Learn School, teachers, students and parents work together to create a progressive and humanistic community that promotes mutual respect, involvement and curiosity.

winning awards for the student-run newspaper and was being recognized for its experiential and project-based teaching strategies.

The conversation about education needs to ask: How do we raise a generation of children who use their academic skills in ways that reflect the values we want for our society in the future? Perhaps Project Learn School can serve as an inspiration.

Unfortunately, Pennsylvania was unhappy with this rogue institution because it did not adhere to state standards. But Allender, Fox, and Bailey believed in choosing the right curriculum for each individual student. They would not squeeze individuals into a generic mold. They took their inspiration from the education reformer John Dewey, refusing to test students because they believed that assessments should look at how the individual has made cumulative progress rather than comparing the individual to peers. Not surprisingly, the state eventually pressured the school to close its doors. Devastated, the committed group of parents, staff, and students met in the Continued on page 3

From the May 1982 P.L. Paper: “The Creative Writing Class looks at the $50 check they won in the contest sponsored by End Violence to the Next Generation.“

Awbury Arboretum – would they need

and wonderful beings live in the Phila-

wings? What about fur – would their

delphia woods? Art students at Arcadia winter coats have grown out by the University and Project Learn School did, time of the exhibit? What colors would and the resulting creations resided at

blend in with the types of trees found

Awbury Arboretum for a two-week

exhibit called Curious Creatures. Art students at Arcadia University created narratives about imaginary creatures after visiting the Arboretum’s Secret Garden. They gave those stories to PLS students who made sculptures that brought these creatures to life. A sculpture from the “Curious Creatures exhibit.

Meanwhile, the Arcadia students created habitat for the sculptures. Artists Carole Loeffler, Associate Professor in the Department of Art and Design at Arcadia, and Joan Fox, art teacher at PLS, facilitated this project. The exhibit was on display April 11 – 26, 2015.

A project in learning; Continued from page 3 basement of a local church to hold one of their signature town meetings, where policy decisions are made using a modified consensus process. Anyone who has worked with a Quaker organization knows that consensus can be slow, frustrating, and messy. This was no exception. The school deliberated until the wee hours of the morning. Most of the students fell asleep. Finally, the community resigned, begrudgingly, to become an independent private school. Now that the school would be dependent on tuition income, there was a worry that PLS would not remain accessible. To keep tuition low, organizers cemented the cooperative model into the bylaws. Parents, staff, and students would work together to run the school, both to reduce costs and to model community values for the children.

the Common Core, testing, charter schools, and technology integration. An ever-growing body of research tells us that school should be participatory, creative, expressive, empowering, equitable, playful, imaginative, and nurturing. Conferences around the world celebrate innovative educational practices that can help schools move away from what Sir Ken Robinson calls &quot;the factory model of education.&quot; Venture capitalists and philanthropist throw money at teaching methods that emphasize &quot;character&quot; and &quot;social emotional learning.&quot;

Still, words like cooperative and humanistic may conjure images of the progressive educational idealism of the 1970s. PLS was founded in the days of disco, but seems uniquely situated on the frontier of 21st-century education. Update the Today, the school remains true to language – change coop to crowdits humanistic roots and the school sourced – and the school is teachis still run cooperatively. Classing and embodying the critical skills room teachers are all paid profes- necessary for a 21st-century sionals, but there is no principal economy. and the administration is a volunThe conversation about education teer committee of parents and needs to ask: How do we raise a teachers. Why? Because just as the generation of children who use school does not want a classroom their academic skills in ways that with hierarchies of expertise, we reflect the values we want for our also do not want an administrative society in the future? Perhaps Prostructure that mirrors typical ject Learn School can serve as an industrial-era management inspiration. practices. This article originally appeared in the

Too many conversations about edPhiladelphia Inquirer. Abbreviated and ucation in the United States today reprinted with permission. forget that school is not just about

Dates in PLS History A meander through old PLS newspapers uncovered these events. 1969

PLS started in the basement of a home on Glen Echo Rd in Mount Airy.

PLS relocated to 6 and Buttonwood Streets for a short while, a former public school building, and operated as a public school. It then inhabited various churches for a couple of years: Unitarian Universalist Society of Germantown, Church of the Brethren, St. Michael’s German Lutheran, Epiphany Episcopal. At this time, it operated unlicensed, with tuition on a sliding scale of $100 to $1,000. Teachers were paid $100 per week.

PLS became a licensed private school (spring 1972) and was located on Herman St. in Germantown. It moved to its present-day location at 6525 Germantown Ave in Fall 1972.

The first PLS newspaper was published. Staff meetings were open to all who wanted to attend, and the newspaper requested, “Students, please try to be polite.”

PLS had a resident cat which everyone in the school loved, “except Donna Allender,” as the P.L. Paper noted. The teachers made the decision to keep the cat when Donna wasn’t there. (Donna and Jerry now have two cats of their own.)

Students from PLS visited Lloyd Alexander at his home.

PLS paid off its first mortgage, which was backed by ten families as guarantors. Parents and teachers celebrated by burning the mortgage.

PLS expanded classroom space with a three-story addition to the building.

PLS completed the project of annexing the three-story building next door and in-filling the space between the two buildings with additional office and classroom space.

PLS built the playground structure that is currently in the play yard. The playground was funded primarily by a generous gift from the parents of Chris Eady in memory of their son, a PLS alumni who died at age 28 in a swimming accident.

The PLS Soccer Team, coached by Roni Anton and Brian Girard, had an undefeated season! PLS fielded a team for more than two decades beginning in 1976.

PLS joined a suit challenging the state-wide requirement for all students (including at private schools) to recite the Pledge of Allegiance.

From the May 1983 P.L. Paper covering the Mortgage Burning Party: “Miguel Pulido (center) presents plaques to Bill Bailey (left) and Frank Malley (right) in honor of their extraordinary contribution to PL’s building over the years.”

Thank you, donors! Project Learn School counts on donations to stay financially accessible to a range of families. Your donation helps us to offer the levels of aid that keep tuition doable. This year Project Learn School was able to provide more than $110,000 in tuition aid – that’s almost 15% of the total tuition income! Thank you for your generosity! Our donor list is sometimes incomplete – but this is because of our broad base of supporters raising funds for PLS in a variety of ways. If you contributed to PLS this year and your name is not on this list, be sure to let us know so that we can properly appreciate your gift. Thank you also to the scores and scores of people who donate time, talents and love to PLS. We are grateful that you choose to engage in this work with us! We offer a special note in memory of Marc Barag. Marc, father of PLS alumni Rachel and Molly and husband of Nancy, passed away this December at age 63. We are grateful for the Barag family’s ongoing generosity over the years – Marc provided our school photos each year and donated much of the profit back to the school.

Gifts were given in honor of:  The terrific staff at PLS  Donna Allender

Gyasi and Tia in the Community Room, which was re-tiled last year thanks to a generous donor.

We want to hear from you! Share with us about what you and yours are up to! Use the enclosed form or write to us at development@projectlearnschool.org. We will publish alumni news in the next issue of the PLS newsletter. 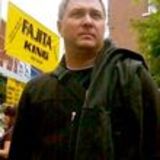