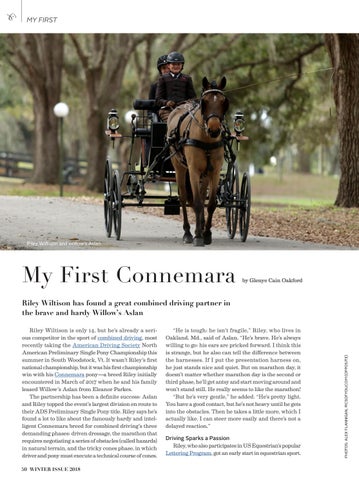 Riley Wiltison is only 14, but he’s already a serious competitor in the sport of combined driving, most recently taking the American Driving Society North American Preliminary Single Pony Championship this summer in South Woodstock, Vt. It wasn’t Riley’s first national championship, but it was his first championship win with his Connemara pony—a breed Riley initially encountered in March of 2017 when he and his family leased Willow’s Aslan from Eleanor Parkes. The partnership has been a definite success: Aslan and Riley topped the event’s largest division en route to their ADS Preliminary Single Pony title. Riley says he’s found a lot to like about the famously hardy and intelligent Connemara breed for combined driving’s three demanding phases: driven dressage, the marathon that requires negotiating a series of obstacles (called hazards) in natural terrain, and the tricky cones phase, in which driver and pony must execute a technical course of cones. 50 WINTER ISSUE 2018

“He is tough; he isn’t fragile,” Riley, who lives in Oakland, Md., said of Aslan. “He’s brave. He’s always willing to go: his ears are pricked forward. I think this is strange, but he also can tell the difference between the harnesses. If I put the presentation harness on, he just stands nice and quiet. But on marathon day, it doesn’t matter whether marathon day is the second or third phase, he’ll get antsy and start moving around and won’t stand still. He really seems to like the marathon! “But he’s very gentle,” he added. “He’s pretty light. You have a good contact, but he’s not heavy until he gets into the obstacles. Then he takes a little more, which I actually like. I can steer more easily and there’s not a delayed reaction.” Driving Sparks a Passion Riley, who also participates in US Equestrian’s popular Lettering Program, got an early start in equestrian sport. 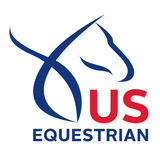