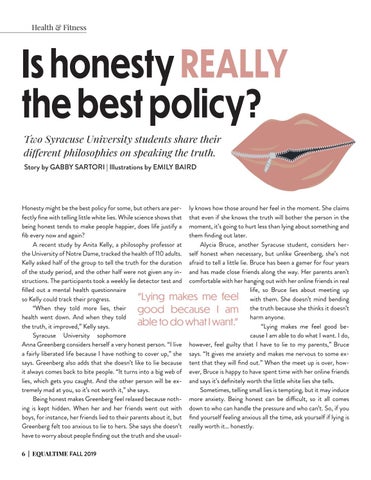 Honesty might be the best policy for some, but others are per- ly knows how those around her feel in the moment. She claims fectly fine with telling little white lies. While science shows that that even if she knows the truth will bother the person in the being honest tends to make people happier, does life justify a moment, it’s going to hurt less than lying about something and fib every now and again? them finding out later. A recent study by Anita Kelly, a philosophy professor at Alycia Bruce, another Syracuse student, considers herthe University of Notre Dame, tracked the health of 110 adults. self honest when necessary, but unlike Greenberg, she’s not Kelly asked half of the group to tell the truth for the duration afraid to tell a little lie. Bruce has been a gamer for four years of the study period, and the other half were not given any in- and has made close friends along the way. Her parents aren’t structions. The participants took a weekly lie detector test and comfortable with her hanging out with her online friends in real filled out a mental health questionnaire life, so Bruce lies about meeting up “Lying makes me feel so Kelly could track their progress. with them. She doesn’t mind bending “When they told more lies, their good because I am the truth because she thinks it doesn’t health went down. And when they told harm anyone. able to do what I want.” the truth, it improved,” Kelly says. “Lying makes me feel good beSyracuse University sophomore cause I am able to do what I want. I do, Anna Greenberg considers herself a very honest person. “I live however, feel guilty that I have to lie to my parents,” Bruce a fairly liberated life because I have nothing to cover up,” she says. “It gives me anxiety and makes me nervous to some exsays. Greenberg also adds that she doesn’t like to lie because tent that they will find out.” When the meet up is over, howit always comes back to bite people. “It turns into a big web of ever, Bruce is happy to have spent time with her online friends lies, which gets you caught. And the other person will be ex- and says it’s definitely worth the little white lies she tells. tremely mad at you, so it’s not worth it,” she says. Sometimes, telling small lies is tempting, but it may induce Being honest makes Greenberg feel relaxed because noth- more anxiety. Being honest can be difficult, so it all comes ing is kept hidden. When her and her friends went out with down to who can handle the pressure and who can’t. So, if you boys, for instance, her friends lied to their parents about it, but find yourself feeling anxious all the time, ask yourself if lying is Greenberg felt too anxious to lie to hers. She says she doesn’t really worth it… honestly. have to worry about people finding out the truth and she usual6 | EQUALTIME FALL 2019 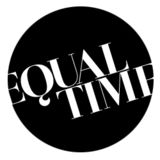