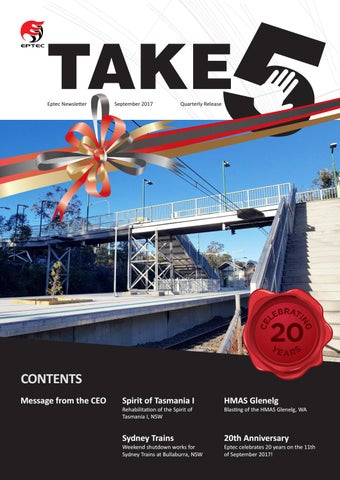 CONTENTS Message from the CEO

Spirit of Tasmania I

Rehabilitation of the Spirit of Tasmania I, NSW

Blasting of the HMAS Glenelg, WA

I’d like to welcome you back to our third newsletter for 2017. This quarter was a significant milestone for Eptec, both in regards to project work, and as growth for our company. On the Services side of the business, Peats Ferry Bridge Rehabilitation works have commenced, with site mobilisation beginning at the end of August. This is one of Eptec’s larger Services projects and is forecast to be completed in late 2018. Stay tuned for a more in-depth update in our next newsletter.

Also on the Services side, Eptec has been working on a variety of Sydney Trains railway shutdowns. I’d like to congratulate the staff and crew for doing a tremendous job, finishing each shutdown on or ahead of time. Eptec Marine will be exhibiting at Pacific 2017 and I’m excited to be amongst all the industry specialists. Our goal as an SME is to work with the Primes under the Government Peacetime Upgrade, and

deliver outstanding work as we’ve done over the last 20 years. That brings me to my last point – September 11th 2017 marked Eptec’s 20th Year Anniversary. We would not be where we are today without the hard work and perseverance of our team of staff and crew, and the continual support of our clients and suppliers. I’d like to extend a big thank you for your contribution over the last 20 years, however big or small. At Eptec, our people are the core of our business. I want to thank our employees, stakeholders, and clients for being a part of this 20 year journey with me, and I look forward to another 20 years with everyone.

When this icon is seen, click for more information

Eptec Marine has undertaken work on both the S.P.O.Tâ&amp;#x20AC;&amp;#x2122;s since 2004 and was commissioned by Thales Australia Pty Ltd to undertake preservation works for Spirit of Tasmania I for its 2017 Docking.

This was a relatively short docking of only 18 days, and within the time frame, Eptec painted over 11,000 sqm including internal decks, walkways and bulkheads in the AFT and tanks. With the hard work of all supervisors, staff and crew, Eptec managed to complete the job safely, on time and on budget.

Completed rehabilitation of the SPOT I

Bullaburra Station Shutdown, NSW Bullaburra Station is located on the Main West Line 98km west of Sydney near the Blue Mountains in an electrified section of the rail network. Eptec Services had been engaged to remove the hazardous coating system and apply a new specified coating system. All these works commenced on the Saturday 6am and were completed for handover by 8pm Sunday night – a tight 38 hour window. The footbridge recently underwent significant refurbishment work, including replacement of stairways and balustrades as well as the blasting and painting of the stringers supporting the stair treads. The rest of the footbridge showed a breakdown of the lead paint system. Eptec’s main scope of work included:

• Scaffolding • Encapsulation system (shrink wrap) to create a negative pressurised system • Environmental protection along with project specified areas that required protection • Dry abrasive blasting • Supply and apply a new coating system Although the shutdown works occurred in an overnight window, Eptec managed to complete all works 4 hours ahead of time to the satisfied requirements of the Client (and the commuters on Monday morning).

Inside scaffolding, ready for blast and paint

HMAS Glenelg, WA HMAS Glenelg (ACPB 96), named for the city of Glenelg, South Australia is an Armidale-class patrol boat of the Royal Australian Navy (RAN). HMAS Glenelg was one of two patrol boats ordered in 2005, following the Australian Government commitment to provide a dedicated patrol force for the oil and gas producing facilities located off the North-West coast of Australia. HMAS Glenelg was constructed by Austal at their shipyard in Henderson, Western Australia and was the last ship of the class to be commissioned, on 22 February 2008.

Eptec Marine was contracted by Austal to undertake the preparation and preservation works for HMAS Glenelg for its 2017 Docking. Works included a full removal of the underwater hull paint scheme in order to survey the integrity of the structure and allow Austal to undertake remedial works. This work was conducted under strict time restrictions, with Eptec crew completing the project whilst meeting all external certifications.

Eptec secured its first project in late 1997 on the HMAS Success in Sydney, for SOFRACO, which co-founder Enrico Piccioli supervised himself with labour hire personnel. Following the demerger of Transfield in 1998, the opportunity arose for Eptec to secure work and key personnel to provide preservation and insulation services to Tenix. Not long after, Eptec won the Anzac Frigates NewBuild Project, which then laid the foundation for Eptec’s strong Marine reputation today.

After the passing of Enrico on the 9th May 2014, Claudio Di Berardino was appointed MD. In the following year of 2015, Joe Viglione stepped up to be CEO, and it has been a period of proud stability and focus.

Eptec also established its name in the broader industry Services sector in 1998, with the Port Kembla Copper

The photos on the right are a snippet of the memories created from the 20th anniversary celebrations. Eptec’s success today is a direct result of all the hard work, commitment and determination of everyone involved. A heartfelt thank you to all of you!

Join Eptec in celebrating our 20th Anniversary! This edition of Take 5 highlights some of our current projects and includes photos from the 20th anniversary celebrations! 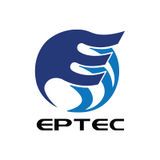