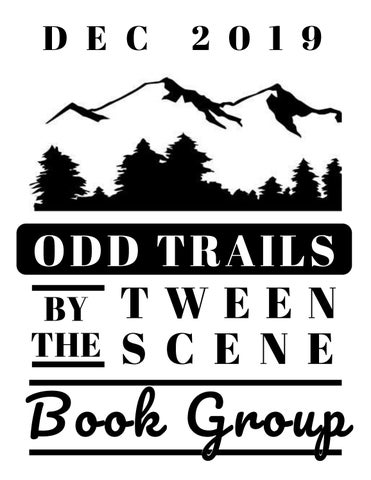 These stories were inspired by Greenglass HouseÂ by Kate Milford. In the book, the characters get snowed in and tell stories around a campfire. Some of the kids also play a roleplaying game called Odd Trails. Book group membersÂ took turns writing the stories. Can you tell where one author stopped and another takes over?

Story #1 He had a black coat. He had his paper towel ready. He was unhappy. Lassy bent down, and slowly started to clean up the cracked eggs. He sighed. Why did his little brother have to be so clumsy? Eli ran into the room, dragging a little wooden sleigh behind him. "Let's go sledding!" he exclaimed. "Oh fine." John had been having a VERY dreary morning. He was ready for some fun. They ran to Skeleton Hill. Ugh, John thought. He had forgotten to clean the spilt hot chocolate. Oh well. He would clean it up later. Right now, he was going to have fun! THE END.

Story #2 It was a snowy day. The trees were covered in blood and a clown was staring at you. The next thing you know is nothing. You tripped on a log, and you died of starvation.Â "Continue?" your Apple IIe asked. "No," you replied. THE END.

Story #3 Once upon a time there was a girl. She was a human and WHO the heck would wanna be one? Not her! Her name was Taylor and she had blue hair and blue eyes. Her skin was brown and she wished she was a cat. "Hey mama?" she asked. "Yes, pumpkin?" he mother answered. "Can I be a cat?" "No." She ran outside. "I wanna be a cat!!!" she screamed. Then she started crying. The next morning she said "I'm going out to have a wizard turn me into a cat." So Taylor, being the typical four-year-old,

went looking for a wizard. First, she went to her neighbor's house (who looked like a wizard to her). "Are you a wizard?" Her neighbor, Mr. Mike, stroked his long white beard. "No?" "Oh, ok," Taylor muttered sadly. "I just wanna be a cat." "Oh! Then I have the perfect thing." Then Taylor walked back with a new cateared headband.Â THE END.

Story #4 One swirly, snowy day Linn was dragging her sled up the steepest and best sledding hill in town. "Hurry up!" her brother Jim yelled back at her. And then the hot chocolate spilled. It was so bad it burned right through Linn's pants then right through Linn's leg! THE END.

Story #5 Once upon a time there was a boy named Glass. He had a house. But did not have any food or money. He had no family either. One day he was searching for food in the woods when he saw something. It was a pond. "Aaaahhh!" he sighed and drank from the pool. The hot cocoa spilled. Ahem. But this was no ordinary pool... It was... an enchanted pond. And if you drank it you would turn into... a cat. He looked up and saw his furry paws. Then he saw the blue haired girl drink from the pool and turn into a cat. "Yay! I'm a cat." THE END.

Story #6 It was a dark and stormy night. Then the world exploded. There were two kids left named Conner and Bob. They were blasted away onto a planet far far away in a galaxy far far away. It was a sustainable planet with weird creatures. Weird, weird creatures, like greedy grannies and clowns. THE END.

Story #7 On the third floor a strange rustling sound was heard. A white paper dove peeled off the wall in the third bedroom. Across the world, a blue-haired woman was telling a story in a green-glass house. Everyone had their secret. But there was one person who was only seen by one. His name was Bob the Ghost. He liked to scare people but one person befriended Bob. And his name was Joe. Joe was on the run from his granny. His granny was a mastermind who was planning to steal all the hot chocolate in the world. THE END.

Story #8 "I didn't do it, I swear." Ben shouted. "It was Cara! You have to believe me, Mom!" Sadly, she didn't. Ben's mom looked at Cara, then Ben, then back at Cara. Then she looked at the mess of broken glass and the flower that coated the walls and floor. "Okay... I'm going to give you one chance to explain yourselves. It better be good." Ben's mom glared at her children. Then the children said

"I confess," said Ben. "I stole all the cookies and Parker helped me eat them." THE END.

Story #9 I stared into the blackness as I fell, and heard a loud roar from the blankness. Suddenly I hit the ground. Another roar came from my left, and I screamed. I scrambled away, scraping my knees on the rocky ground. Then I fell into sparkle glittertime land. Yay! THE END.

Story #10 Once upon a time, there was a boy named Bob. He helped lots of people who need help. Santa was watching Bob, but every so often Bob robbed a bank and always got away with it. Then one day, Santa came and took him to the future where it was full of unicorns and war. And grannies. Then suddenly Bob's pants got caught on fire by a burner. He went to a house and jumped in the swimming pool.

Story #11 In Greenglass House there was a dead girl. She had a play box and hid it safe and got a present. She opened it and it was filled with things. She said she found it in the woods. She ate yummy yummy marshmallows. She stole the bank and got $2,000,000. And she got thrown in jail but eventually got free. THE END.

Story #12 There once was a house on a hill. It was called Landesgown. Inside this house lived a serial killer. YEET AND I OOP SK SK Sorry! Cocoa spilled. Ahem. There was a mouse that lived in the house. His name was Tip. He had 35 kids and tried to keep them from getting killed by the killer. "Ok kids!" he squeaked. "Pie time!" But the youngest of the youngest of the children, Seb, ran outside. The poor mouse was seen by the killer. THE END. A collection of "exquisite corpse" stories inspired by storytelling in THE GREENGLASS HOUSE by Kate Milford. Written by members of the Tween...

A collection of "exquisite corpse" stories inspired by storytelling in THE GREENGLASS HOUSE by Kate Milford. Written by members of the Tween...