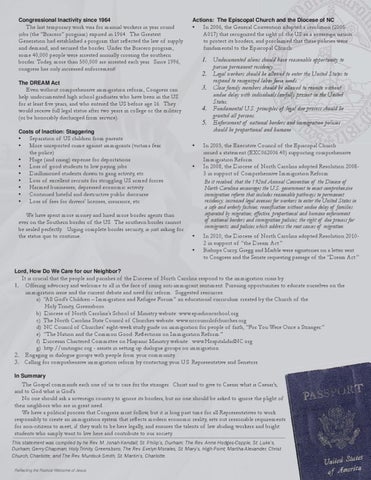 Actions: The Episcopal Church and the Diocese of NC

The last temporary work visa for manual workers in year round jobs (the “Bracero” program) expired in 1964. The Greatest Generation had established a program that reflected the law of supply and demand, and secured the border. Under the Bracero program, some 40,000 people were arrested annually crossing the southern border. Today, more than 500,000 are arrested each year. Since 1996, congress has only increased enforcement!

Even without comprehensive immigration reform, Congress can help undocumented high school graduates who have been in the US for at least five years, and who entered the US before age 16. They would receive full legal status after two years in college or the military (or be honorably discharged from service). Costs of Inaction: Staggering

We have spent more money and hired more border agents than ever on the Southern border of the US. The southern border cannot be sealed perfectly. Urging complete border security, is just asking for the status quo to continue.

In 2006, the General Convention adopted a resolution (2006A017) that recognized the right of the US as a sovereign nation to protect its borders, and proclaimed that these policies were fundamental to the Episcopal Church:

Be it resolved, that the 192nd Annual Convention of the Diocese of North Carolina encourages the U.S. government to enact comprehensive immigration reform that includes reasonable pathways to permanent residency; increased legal avenues for workers to enter the United States in a safe and orderly fashion; reunification without undue delay of families separated by migration; effective, proportional and humane enforcement of national borders and immigration policies; the right of due process for immigrants; and policies which address the root causes of migration. • •

In 2010, the Diocese of North Carolina adopted Resolution 20102 in support of “the Dream Act.” Bishops Curry, Gregg and Marble were signatories on a letter sent to Congress and the Senate requesting passage of the “Dream Act.”

Lord, How Do We Care for our Neighbor?

It is crucial that the people and parishes of the Diocese of North Carolina respond to the immigration crisis by: Offering advocacy and welcome to all in the face of rising anti-immigrant sentiment. Pursuing opportunities to educate ourselves on the immigration issue and the current debate and need for reform. Suggested resources: a) “All God’s Children – Immigration and Refugee Forum” an educational curriculum created by the Church of the Holy Trinity, Greensboro. b) Diocese of North Carolina’s School of Ministry website: www.episdioncschool.org c) The North Carolina State Council of Churches website: www.nccouncilofchurches.org d) NC Council of Churches’ eight-week study guide on immigration for people of faith, “For You Were Once a Stranger.” e) “The Nation and the Common Good: Reflections on Immigration Reform.” f) Diocesan Chartered Committee on Hispanic Ministry website: www.HospitalidadNC.org g) http://unitingnc.org - assists in setting up dialogue groups on immigration 2. Engaging in dialogue groups with people from your community. 3. Calling for comprehensive immigration reform by contacting your U.S. Representative and Senators. 1.

The Gospel commands each one of us to care for the stranger. Christ said to give to Caesar what is Caesar’s, and to God what is God’s. No one should ask a sovereign country to ignore its borders, but no one should be asked to ignore the plight of their neighbors who are in great need. We have a political process that Congress must follow, but it is long past time for all Representatives to work responsibly to create an immigration system that reflects modern economic reality, sets out reasonable requirements for non-citizens to meet, if they wish to be here legally, and ensures the talents of law abiding workers and bright students who simply want to live here and contribute to our society. This statement was compiled by he Rev. M. Jonah Kendall, St. Philip’s, Durham; The Rev. Anne Hodges-Copple, St. Luke’s, Durham; Gerry Chapman, Holy Trinity, Greensboro; The Rev. Evelyn Morales, St. Mary’s, High Point; Martha Alexander, Christ Church, Charlotte; and The Rev. Murdock Smith, St. Martin’s, Charlotte. Reflecting the Radical Welcome of Jesus

A quarterly magazine from the Episcopal Diocese of North Carolina. This issue's theme is "Making Room in the Inn." 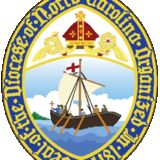