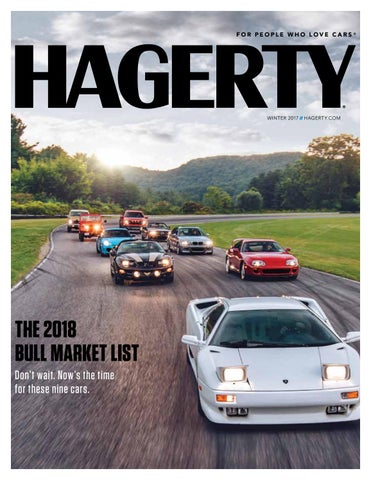 FOR PEOPLE WHO LOVE CARS ®

THE 2018 BULL MARKET LIST Don’t wait. Now’s the time for these nine cars.

RPM Foundation provides scholarships, formal training, and mentorship to the next generation of automotive and marine restorers and preservationists. Learn more at rpm.foundation.

IN THE FOOTSTEPS OF HER FATHER With a little career advice from Dad and a grant from the RPM Foundation, Emily Hatsigeorgiou is on her way. EMILY HATSIGEORGIOU ADMITS SHE was like a lot of teens graduating from high school these days: She didn’t have a clue what to do with her life. “So I sat down with my dad,” she says. “My father has been a mechanic his whole life and mentioned how happy he had been with his career. He told me that as a woman, there would probably

be some good opportunities in the field.” After 30 years at General Motors as a technician and then supervisor, her dad’s still there and loving it. “Watching his career and his success was really a big influence,” she says. Hatsigeorgiou’s father brought his work home with him, too. She remembers he had a couple Pontiac GTOs and was into the local

drag racing scene. He was a regular at the car shows around the family home in Howell, Michigan, and he brought Emily and her two older sisters along. “He was always working on one of our daily drivers,” she recalls. “Oil changes. Brake jobs. I feel like there was always a Corsica he was working on…and I was always there helping him, handing him the tools. I guess I was always a ‘Daddy’s girl.’” Hatsigeorgiou (haatsi-george-e-oh) not only took her father’s advice, she followed through in a big way. Through her program in auto services at Washtenaw Community College, she got an invite in November 2016 to SEMA’s annual tradeshow in Las Vegas. For four days, she met people from across the industry. She also attended some inspirational lectures, including one about women in the industry, by TV personality and women’s land speed record holder Jessi Combs. “I also met RPM Foundation president Diane Fitzgerald, and she was just great. I guess we hit it off, because the relationship has been incredibly helpful in opening doors.” Hatsigeorgiou’s chance encounter also kicked off a busy year. After starting classes last January, she landed a 10-day, all-expenses-paid foundation internship in Scottsdale, working at the Arizona Concours and also at Gooding & Company, where she prepped cars for the show and the auction. “Then Diane was speaking to people at the Revs Institute, and my name came up. Revs was looking for students to come to their March symposium. I got invited and was able to meet some of the best preservation and restoration experts in the industry.” Hatsigeorgiou is now looking forward to graduating in May 2018. “School involves a lot of hands-on work—basically, building up and tearing down cars. At Washtenaw we also have a drag team, so we work on the cars in the shop. One of the cars owned by my instructor, Mike Duff, is a ’66 Mustang that he races at the Milan Dragway. It’s a 9.85-second car. It’s wonderful that he lets us do so much work on it.” When Hatsigeorgiou graduates, she’ll be a certified tech. And she’s got a full-time job lined up at the GM Proving Grounds in Milford. But really, she says, the possibilities are endless. “My career path is still taking shape. GM has been such an influential company in my life. Working there will be pretty spectacular.”—Bob Butz editor@hagerty.com Photo by Sandon Voelker

The RPM Foundation is an entity of America's Automotive Trust.

Hagerty - In The Footsteps Of Her Father

Hagerty - In The Footsteps Of Her Father