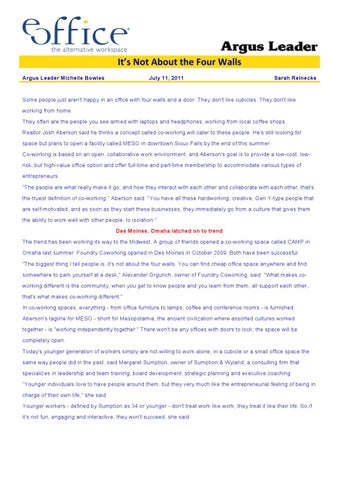 It’s Not  About  the  Four  Walls   Argus Leader Michelle Bowles

Some people just aren't happy in an office with four walls and a door. They don't like cubicles. They don't like working from home. They often are the people you see armed with laptops and headphones, working from local coffee shops. Realtor Josh Aberson said he thinks a concept called co-working will cater to these people. He's still looking for space but plans to open a facility called MESO in downtown Sioux Falls by the end of this summer. Co-working is based on an open, collaborative work environment, and Aberson's goal is to provide a low-cost, lowrisk, but high-value office option and offer full-time and part-time membership to accommodate various types of entrepreneurs. "The people are what really make it go, and how they interact with each other and collaborate with each other, that's the truest definition of co-working," Aberson said. "You have all these hardworking, creative, Gen Y-type people that are self-motivated, and as soon as they start these businesses, they immediately go from a culture that gives them the ability to work well with other people, to isolation." Des Moines, Omaha latched on to trend The trend has been working its way to the Midwest. A group of friends opened a co-working space called CAMP in Omaha last summer. Foundry Coworking opened in Des Moines in October 2009. Both have been successful. "The biggest thing I tell people is, it's not about the four walls. You can find cheap office space anywhere and find somewhere to park yourself at a desk," Alexander Grgurich, owner of Foundry Coworking, said. "What makes coworking different is the community, when you get to know people and you learn from them, all support each other, that's what makes co-working different." In co-working spaces, everything - from office furniture to lamps, coffee and conference rooms - is furnished. Aberson's tagline for MESO - short for Mesopotamia, the ancient civilization where assorted cultures worked together - is "working independently together." There won't be any offices with doors to lock; the space will be completely open. Today's younger generation of workers simply are not willing to work alone, in a cubicle or a small office space the same way people did in the past, said Margaret Sumption, owner of Sumption & Wyland, a consulting firm that specializes in leadership and team training, board development, strategic planning and executive coaching. "Younger individuals love to have people around them, but they very much like the entrepreneurial feeling of being in charge of their own life," she said. Younger workers - defined by Sumption as 34 or younger - don't treat work like work, they treat it like their life. So if it's not fun, engaging and interactive, they won't succeed, she said.

"Younger workers need the opportunity to have essentially a social/work balance within the context of a work setting," she said. "For those of us who are older, it looks messy, it looks like these are a bunch of people having too much fun to get anything done." But Sumption noted that these workers thrive in creative environments. Eye on old firehouse at 22nd, Minnesota Mike Hauk, a commercial broker with the Accord Commercial Team at HJN Team Real Estate, also is exploring the financial possibility of opening a co-working space in the old firehouse building at 22nd Street and Minnesota Avenue. "Clients need small office space, but they don't want to commit to long-term leases," he said. "And there isn't a lot on the market for them. When I stop in coffee shops, I see all the people with laptops and headphones, that leads me to believe there is a demand for that type of service," he said. Travis Rhoades, co-owner of Web Concentrate in Sioux Falls, plans to work out of MESO as a part-time member once it opens. Rhoades, 26, works out of a home office but said he spends a lot of time in coffee shops to avoid distractions. "I'm hoping it's a large open space and you get a good vibe, of 'This is a cool, trendy, fun, innovative, creative space to be a part of,' " he said. "To have an office with a closed door, I still get restless being confined to four walls and a door, not having other people around to bounce ideas off of." 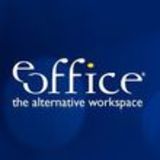 It's Not About the Four Walls

It's Not About the Four Walls