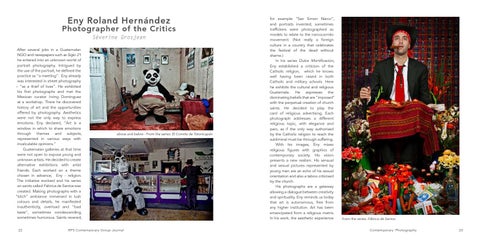 Photographer of the Critics Séverine Grosjean After several jobs in a Guatemalan NGO and newspapers such as Siglo 21 he entered into an unknown world of portrait photography. Intrigued by the use of the portrait, he defined the practice as “a meeting”. Eny already was interested in street photography – “as a thief of lives”. He exhibited his first photographs and met the Mexican curator Irving Dominguez at a workshop. There he discovered history of art and the opportunities offered by photography. Aesthetics were not the only way to express emotions. Eny declared, “Art is a window in which to share emotions through themes and subjects, represented in various ways with incalculable opinions.” Guatemalan galleries at that time were not open to expose young and unknown artists. He decided to create alternative exhibitions with artist friends. Each worked on a theme chosen in advance; Eny - religion. The initiative evolved and his series on saints called Fábrica de Santos was created. Making photographs with a “kitch” ambiance immersed in lush colours and details, he manifested inauthenticity, overload and “bad taste”, sometimes condescending, sometimes humorous. Saints revered, 22

above and below - From the series: El Convite de Totonicapán

for example “San Simon Narco”, and portraits invented; sometimes traffickers were photographed as models to relate to the narcocorrido movement. (Not really a foreign culture in a country that celebrates the festival of the dead without shame.) In his series Dulce Mortificación, Eny established a criticism of the Catholic religion, which he knows well having been raised in both Catholic and military schools. Here he exhibits the cultural and religious Guatemala. He expresses the dominating beliefs that are “imposed” with the perpetual creation of church saints. He decided to play the card of religious advertising. Each photograph addresses a different religious topic, with elegance and pain, as if the only way authorised by the Catholic religion to reach the subliminal must be through suffering. With his images, Eny mixes religious figures with graphics of contemporary society. His vision presents a new realism. His sensual and sexual pictures represented by young men are an echo of his sexual orientation and also a taboo criticised by the church. His photographs are a gateway allowing a dialogue between creativity and spirituality. Eny reminds us today that art is autonomous, free from any higher institution. Art has been emancipated from a religious matrix. In his work, the aesthetic experience 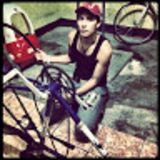