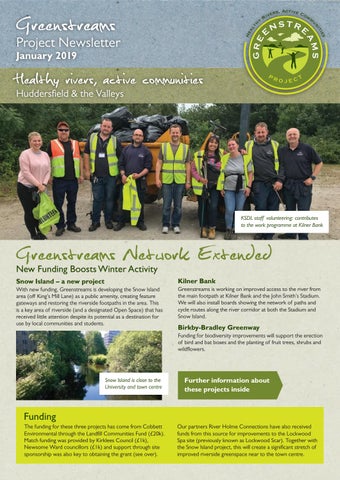 With new funding, Greenstreams is developing the Snow Island area (off King’s Mill Lane) as a public amenity, creating feature gateways and restoring the riverside footpaths in the area. This is a key area of riverside (and a designated Open Space) that has received little attention despite its potential as a destination for use by local communities and students.

Greenstreams is working on improved access to the river from the main footpath at Kilner Bank and the John Smith’s Stadium. We will also install boards showing the network of paths and cycle routes along the river corridor at both the Stadium and Snow Island.

Birkby-Bradley Greenway Funding for biodiversity improvements will support the erection of bird and bat boxes and the planting of fruit trees, shrubs and wildflowers.

Snow Island is close to the University and town centre

Further information about these projects inside

Funding The funding for these three projects has come from Cobbett Environmental through the Landfill Communities Fund (£20k). Match funding was provided by Kirklees Council (£1k), Newsome Ward councillors (£1k) and support through site sponsorship was also key to obtaining the grant (see over).

Our partners River Holme Connections have also received funds from this source for improvements to the Lockwood Spa site (previously known as Lockwood Scar). Together with the Snow Island project, this will create a significant stretch of improved riverside greenspace near to the town centre.

Lowestwood Pond and adjacent river loop walk Lowestwood Pond is designated a Local Wildlife Site and is regionally important for its wetland habitats as well as being home to the rare floating water plantain, a European Protected Species of plant.

Work is progressing on riverside path repairs; it is now well over 12 years since this was upgraded by the Greenstreams Project. Sponsored by Thornton & Ross Ltd, Titanic Spa (both Salmon Supporters)

An information board about the pond and its importance is being erected at the site. With the help of staff volunteers from Thornton & Ross, the pond has also been cleared of massive amounts of rubbish (including over 500 plastic bottles), which has accumulated over many years.

Results of the Lowestwood Pond clean up by volunteers from local business, Thornton & Ross

Lowestwood Pond, it took many hours of hard work to remove the rubbish

Milnsbridge Weir Working with Milnsbridge Enhancement Group, we have now installed railings on all of the steps from Britannia Road down to the weir. We have also replaced the lower wooden steps, which were rotten and dangerous. Using recycled plastic, the new steps should require little maintenance. An electric hedge trimmer has proved to be a useful tool in cutting back vegetation on the riverside path linking to Milnsbridge Centre. Sponsored by Lion Estates Investment Company (Grayling supporter) Milnsbridge Centre Following additional works funded by Aldi, including replacement fencing and treatment of Japanese knotweed, the look of the area is much improved, more inviting and easier to maintain. Work on this site is primarily aimed at litter clearance, with approximately 50 bags of rubbish removed over the year! Sponsored by Aldi (Grayling supporter)

Putting up starling boxes next to the Greenway

Lockwood Spa Following the fire at the adjacent waste transfer station (Hunters) the riverside walk was closed to the public for nearly a year and sponsorship works put on hold. Although redevelopment of the site would offer opportunities for improvement, the problems caused by fly-tipping from Whitehead Lane above the site have been immense. However, with the efforts and support of local councillors and the convening of a multi-agency meeting by local MP Barry Sheerman, new plans to tackle the problems are well underway, with CCTV in place and the site cleared of rubbish by Kirklees Council. Sponsored by LV= (Trout supporter)

John Smith’s Stadium and Kilner Bank The riverside walk below Kilner Bank is now much more attractive for both people and wildlife following tree thinning works along the path. Vegetation around the picnic table and seating has also been cleared along with large amounts of historic litter. To improve access to the river a new set of steps has been built from the main footpath; this also helps with maintenance. This work has now been given a big boost with additional funding opening up a range of new possibilities. Sponsored by Kirklees Stadium Development Ltd (KSDL) and Cummins Turbo Technologies (both Trout supporters)

Birkby-Bradley and Calder Valley Greenways Primarily focused on wildlife habitat improvements, work on the woodlands, especially around the plantations at Bradley and towards Mirfield has continued. This is an ongoing and long term process, reducing the extent of the conifers and encouraging the growth of oak and other native trees including understorey shrubs. Vegetation around existing bat boxes has also been cleared so they are not obstructed. The benefits of all this work are beginning to show with a wider variety of bird and plant life especially. The additional funding received has been a major boost. Sponsored by Cummins Turbo Technologies (Trout supporters)

Migratory Fish As five major barriers to fish passage have now been removed from the Rivers Aire and Calder, it’s worth looking out for migratory fish - such as salmon and sea trout. It’s best to check out the weirs for leaping fish when the rivers are in flood during the autumn. Please report any sightings on our website.

Some of the fly-tipping along the footpath at Lockwood Spa

Cummins volunteers building steps down to the river

A heron with grayling in the river Colne

There are three levels of business support packages: ‘Salmon’, ‘Trout’ and ‘Grayling’. Packages can be tailored to suit company requirements and local opportunities. If you would like to know more about our sponsorship scheme please visit our website www.greenstreams.org.uk/business-support-packages

Greenstreams would like to thank all of our sponsors and volunteers who contributed in 2018. Without these resources the work described here and the and maintenance of the sites would not be possible.

Company News: Environment Kirklees Ltd. We have now completed our transition from Environment Alliance Ltd to Environment Kirklees Ltd, following a merger with the Kirklees Environment Partnership. Our status as a not-for profit company remains the same although we have updated our Articles of Association to better reflect our activities. Greenstreams is the company’s major project. Environment Kirklees is working on a planned day conference on waste and recycling to be held on a Saturday in spring 2019. A steering group to manage this event has been formed. For more information see www.environmentkirklees.org Following the merger in 2016, our voluntary management group was strengthened by the addition of new directors – Ali Stopher, Chas Ball and more recently Paul Davies. They joined existing directors Jeff Keenlyside and Charles Tunbridge. Our contact details remain the same (apart from office e-mail).

Useful contacts for reporting incidents To report a pollution incident, contact the Environment Agency immediately on 0800 807 060 To report fly-tipping, contact Kirklees Council Fly-tipping Hotline 01484 414700 To report crime including wire burning, contact the Police on 999 for emergencies or 101 for non-emergencies.

Environment Kirklees Ltd. A registered Environmental Body under the Landfill Tax Regulations enrolment No. 761034. A not for profit company limited by guarantee, registered in England (reg. no. 3367452) Designed by Donna Heath (07881 725655). Printed on recycled paper by Enterprise Print www.enterpriseprint.net 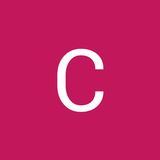 Greenstreams is a project dedicated to making the most of the fantastic rivers in the Huddersfield area for the benefit of both people and w...

Greenstreams is a project dedicated to making the most of the fantastic rivers in the Huddersfield area for the benefit of both people and w...