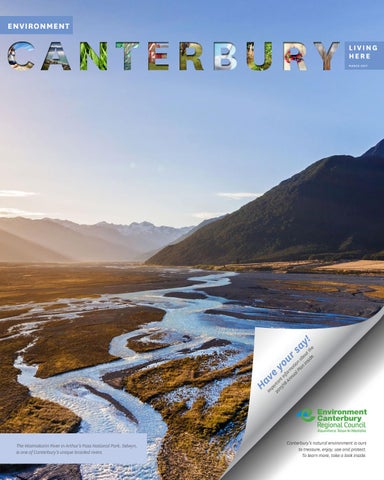 The Waimakariri River in Arthur’s Pass National Park, Selwyn, is one of Canterbury’s unique braided rivers.

Canterbury’s natural environment is ours to treasure, enjoy, use and protect. To learn more, take a look inside.

Caring for our landscape

Wilding conifers are continuing to increase in area at an average rate of about 5-6% per year – with about 2.6 million hectares in New Zealand already affected to some extent. The National Wilding Conifer Management Strategy 2015-2023, released by the Ministry for Primary Industries, addresses control of the pest across the country: www.wildingconifers.org.nz.

hen you think of pest control, ‘Christmas trees’ may not be high on the list of pests you think of. Self-sown pine and other conifer trees cause significant issues for New Zealand’s natural biodiversity. Their ‘weedy’ tendencies give rise to wilding spread so you’ll often see them referred to as wilding pines. They are very hardy trees that produce lots of light, wind-dispersed seeds from an early age. They can invade and take over native habitats and species, and may threaten the whole of the South Island eastern hill and A contractor undertaking on-the-ground high country. This year wilding pine control. Environment Canterbury is undertaking a $4 million wilding control operation over 900,000 hectares, co-funded and implemented with the Crown, Department of Conservation, Land Information New Zealand, and land occupiers.

Another introduced pest is gorse, well known for its vast spreads of yellow flowers across the landscape. Environment Canterbury supports land owners to prevent infestation of land that is presently free of gorse.

Walking in the Hurunui

here are some incredible walks across the Hurunui district, from coastal walks near Amberley, forest walks in Hanmer Springs, the Weka Pass Walkway, or if you need more of a challenge, Mount Grey near Amberley, Mount Isobel near Hanmer Springs and the St James Conservation Area. www.visithurunui.co.nz. To find out about the native birds and plants you could see on your walk, such as the great-spotted kiwi/roroa, yellowhead/mohua, kākā, kea, or the endangered orange-fronted parakeet/kākāriki-whero and blue duck/ whio (threatened) – visit www.ecan.govt.nz (nature in your area/HurunuiWaiau-zone).

There’s so much to explore in the Hurunui District.

25% Around 25% of Canterbury is affected by wilding conifers.

Uniquely braided In Canterbury, the seven alpine rivers that contribute 88% of the flow within the region – Clarence/Waiau Toa, Waiau, Hurunui, Waimakariri, Rakaia, Rangitata, and Waitaki – are all braided. Other foothill rivers are also braided or have braided reaches. Braided rivers are iconic natural features, found in only a few places around the world, such as Alaska, Canada, the Himalayan region, and New Zealand. ‘Braiding’ refers to the multiple water channels that flow around gravel islands. These unique features of the Canterbury landscape started life during the last major ice age 25,000 to 10,000 years ago, when huge glaciers pushed millions of tonnes of rock off the spine of the Southern Alps. As the ice began to retreat, streams and rivers carried this alluvial outwash down the valleys of the east coast and deposited it to form flat basins between the mountains and the coastal plains. Braided rivers are characterised by their multiple, shifting channels, varying flows and shingle substrate. The rivers are an abundant supply of food and support many species that can’t be found anywhere else, including 26 species of native bird, with the majority classified as threatened and facing increased pressures as the natural character of their home changes.

The Canterbury Water Management Strategy (CWMS) aims to halt the decline through its targets and goals with its focus on the integration of water and land management including the protection of indigenous biodiversity and water quality.

Working together In February, the Environment Canterbury Council resolved to make Plan Change 4 of the Land &amp; Water Regional Plan (the ‘Omnibus’ plan change) operative. Among other things, this plan change strengthens the rules regarding removal of vegetation from braided river beds and defines those beds to make it easier to understand how to comply with stock exclusion rules. Many agencies have come together to ensure an aligned approach to protecting the braided rivers. Environment Canterbury, local councils, Te Rūnanga o Ngāi Tahu, Federated Farmers, the Ministry for Primary Industries, Land Information New Zealand, Department of Conservation, Braided River Aid (Braid), Forest &amp; Bird and many other local groups are already driving work on the ground that can be built on for the future. Specific management plans are also being considered for individual rivers, like the Hurunui.

It is recognised that the habitats provided by braided river systems are becoming increasingly vulnerable as we place pressures on them for water use, such as irrigation and hydro schemes and recreation. They also face pressures from increased pests, weeds and pollution.

This is also integrated with kaitiakitanga or guardianship by Ngāi Tahu which applies to the ecological health of all waterways. A number of projects are underway to protect and enhance braided-river ecosystems and species. Such projects include, weed control (e.g. preventing weeds, surveillance, removal); sustained predator control; rules for habitat protection (e.g. legal protection of waterways, firewood cutting rules); adequate environmental flows to sustain fauna; protected areas networks (e.g. to protect a representative range of rivers); community conservation initiatives; recreation management (e.g. restricted access for four wheel drives); communication and education for river users (e.g. improved signage); subregional (zone) action plans; inventories of current state; fencing of stock to keep them out of waterways. Many of these activities are methods for achieving the CWMS targets. The unique protection issues of our braided rivers is explained at www.ecan.govt.nz/cwms-braided-rivers.

s we head into autumn the issue of how we can keep the air clear while remaining warm in our homes over winter, raises its head.

We know that home heating is the main cause of winter air pollution in the areas where air quality is monitored in Canterbury. Environment Canterbury is tasked with providing the strategies and rules to help the community to improve air quality so we can all breathe cleaner, healthier air. What does this mean for the average household? First up, people need to be able to keep warm during winter. But the community has also said it wants to have clean air to breath. So to help achieve those goals we’re focusing on helping people burn better, and upgrade to better burners. This winter we’ll again be providing advice about how to light a clean-burning, hot fire. Scientific evidence tells us that poor wood burning technique and inefficient wood burners are responsible for the majority of winter pollution in our region. That’s why we are encouraging the use of Energy Star® qualified heat pumps or modern ultra-low emission burners that emit less smoke than older, more polluting burners. The World Health Organisation provides air quality guidelines and, consistent with this, the Ministry for the Environment has set the National Environment Standard for Air Quality (NESAQ), which allows for only one high-pollution day a year from 2020. PM10 levels cannot exceed 50 micrograms per cubic metre over a 24 hour period. When we exceed this guideline, we record it as a ‘high pollution’ event. Our targets for the number of high pollution days that is acceptable are very low – and in some areas there is a lot of work to do still to reach them.

PM10 stands for Particulate Matter measuring under 10 microns in diameter. These particles can deposit in our airways, which can cause serious health effects. Environment Canterbury monitors for PM10, PM2.5 (the much finer subset of PM10 created from combustion), carbon monoxide, and in some places sulphur dioxide.

The places we monitor are where pollution is known to be highest. If concentrations in the worst areas are below the national guidelines then we can be confident they are below across the town or city. Environment Canterbury’s role is to help people comply with the rules as soon as possible so we are collectively helping clear up the air. There are a range of other heating options depending on your property type, current burner, where you live etc. There are many variables allowed for in the Canterbury Air Plan so if you need advice, check out the Environment Canterbury website to see what applies in your area, or call us.

Canterbury is home to about 9% of the total boating population of New Zealand. That’s around 110,000 boaties (and approximately 31,680 powerboats). New Navigation Safety Bylaw is there to keep all these locals safe – see www.ecan.govt.nz/navsafety. Jim Dilley is the Harbourmaster for Canterbury. Back in the ‘80s and ‘90s Jim used to visit Lyttelton on container ships before finishing up his career at sea and moving to New Zealand permanently. Jim says Lyttelton’s one of his favourite places in the world, a gritty community where a spade is a spade and the people take you at face value.

In December 2015 Spark NZ partnered with the Canterbury Mayoral Forum and announced that it would bring forward its roll out of 4G fast mobile broadband, to be completed by December 2016. Spark NZ prioritised $14million of investment into Canterbury and only mother nature could prevent them from reaching their target, with just the Hundalee site being incomplete due to the November 2016 earthquake breaking a guy wire on the mast. Spark also went over and above the project specs by putting in additional sites coverage and additional capacity.

Makarini Rupene grew up in the Tuahiwi pa and Kaiapoi, brought up hunting, fishing and gathering mahinga kai/ natural recourses with his whanau and elders. This childhood taught Makarini the importance of the environment and its living ecosystems. Makarini is now working for Environment Canterbury as a Parks Ranger working on our rivers and the coastline cleaning up or re-establishing native areas to enhance wetlands and ecosystems, and upholding the bylaws in the parks. Makarini also represents his Rūnanga on a Canterbury Water Management committee. As you can see from this picture, Makarini has also been involved with the Port Hills fire fighting efforts. Above: Community members got together on February 28 to rescue īnaka (whitebait) and tuna (eels) from the drying Waikirikiri/Selwyn River near Coes Ford. About 2,500 īnaka and 300 tuna were relocated to Te Waihora/Lake Ellesmere.

Visit www.ecan.govt.nz, view the short summary document and/or the full draft 2017/18 Annual Plan and use the online form to send your feedback in

Email ecinfo@ecan.govt.nz to arrange a time to talk to Councillors in May if you wish.

Please note, the closing date for feedback or to request a time to meet with Councillors is 5pm on Friday 21 April.

Some fabulous images of this beautiful region were submitted to the photo competition run in the last issue of Living Here. Thank you to all those who shared them. The winner of the Fitbit Alta Fitness Wristband is Cindy Merritt of Christchurch, who took this picture on a walk around Purau Bay.

Living Here is sent to all households in the Canterbury region to give residents an overview of what is happening in the region, and a look at the work of Environment Canterbury. 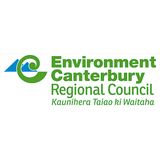