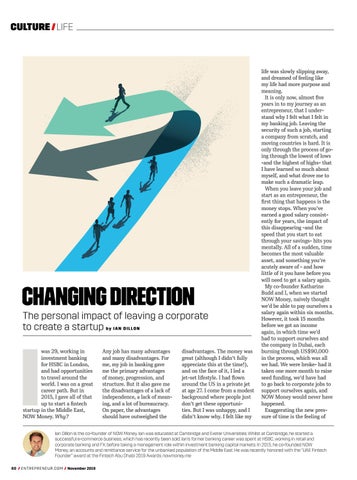 was 29, working in investment banking for HSBC in London, and had opportunities to travel around the world. I was on a great career path. But in 2015, I gave all of that up to start a fintech startup in the Middle East, NOW Money. Why?

disadvantages. The money was great (although I didn’t fully appreciate this at the time!), and on the face of it, I led a jet-set lifestyle. I had flown around the US in a private jet at age 27. I come from a modest background where people just don’t get these opportunities. But I was unhappy, and I didn’t know why. I felt like my

life was slowly slipping away, and dreamed of feeling like my life had more purpose and meaning. It is only now, almost five years in to my journey as an entrepreneur, that I understand why I felt what I felt in my banking job. Leaving the security of such a job, starting a company from scratch, and moving countries is hard. It is only through the process of going through the lowest of lows -and the highest of highs- that I have learned so much about myself, and what drove me to make such a dramatic leap. When you leave your job and start as an entrepreneur, the first thing that happens is the money stops. When you’ve earned a good salary consistently for years, the impact of this disappearing -and the speed that you start to eat through your savings- hits you mentally. All of a sudden, time becomes the most valuable asset, and something you’re acutely aware of - and how little of it you have before you will need to get a salary again. My co-founder Katharine Budd and I, when we started NOW Money, naively thought we’d be able to pay ourselves a salary again within six months. However, it took 15 months before we got an income again, in which time we’d had to support ourselves and the company in Dubai, each burning through US$90,000 in the process, which was all we had. We were broke- had it taken one more month to raise seed funding, we’d have had to go back to corporate jobs to support ourselves again, and NOW Money would never have happened. Exaggerating the new pressure of time is the feeling of

Ian Dillon is the co-founder of NOW Money. Ian was educated at Cambridge and Exeter Universities. Whilst at Cambridge, he started a successful e-commerce business, which has recently been sold. Ian’s former banking career was spent at HSBC, working in retail and corporate banking and FX, before taking a management role within investment banking capital markets. In 2015, he co-founded NOW Money, an accounts and remittance service for the unbanked population of the Middle East. He was recently honored with the “UAE Fintech Founder” award at the Fintech Abu Dhabi 2019 Awards. nowmoney.me 60 / E N T R E P R E N E U R . C O M / November 2019