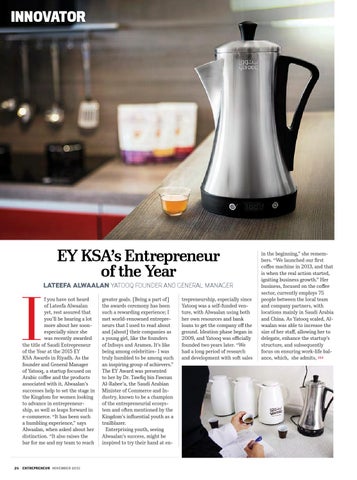 EY KSA’s Entrepreneur of the Year

f you have not heard of Lateefa Alwaalan yet, rest assured that you’ll be hearing a lot more about her soonespecially since she was recently awarded the title of Saudi Entrepreneur of the Year at the 2015 EY KSA Awards in Riyadh. As the founder and General Manager of Yatooq, a startup focused on Arabic coffee and the products associated with it, Alwaalan’s successes help to set the stage in the Kingdom for women looking to advance in entrepreneurship, as well as leaps forward in e-commerce. “It has been such a humbling experience,” says Alwaalan, when asked about her distinction. “It also raises the bar for me and my team to reach

greater goals. [Being a part of] the awards ceremony has been such a rewarding experience; I met world-renowned entrepreneurs that I used to read about and [about] their companies as a young girl, like the founders of Infosys and Aramex. It’s like being among celebrities- I was truly humbled to be among such an inspiring group of achievers.” The EY Award was presented to her by Dr. Tawfiq bin Fawzan Al-Rabee’a, the Saudi Arabian Minister of Commerce and Industry, known to be a champion of the entrepreneurial ecosystem and often mentioned by the Kingdom’s influential youth as a trailblazer. Enterprising youth, seeing Alwaalan’s success, might be inspired to try their hand at en-

trepreneurship, especially since Yatooq was a self-funded venture, with Alwaalan using both her own resources and bank loans to get the company off the ground. Ideation phase began in 2009, and Yatooq was officially founded two years later. “We had a long period of research and development with soft sales

in the beginning,” she remembers. “We launched our first coffee machine in 2013, and that is when the real action started, igniting business growth.” Her business, focused on the coffee sector, currently employs 75 people between the local team and company partners, with locations mainly in Saudi Arabia and China. As Yatooq scaled, Alwaalan was able to increase the size of her staff, allowing her to delegate, enhance the startup’s structure, and subsequently focus on ensuring work-life balance, which, she admits, >>>