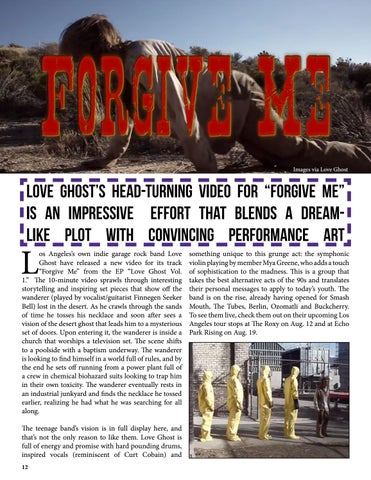 os Angeles’s own indie garage rock band Love Ghost have released a new video for its track “Forgive Me” from the EP “Love Ghost Vol. 1.” The 10-minute video sprawls through interesting storytelling and inspiring set pieces that show off the wanderer (played by vocalist/guitarist Finnegen Seeker Bell) lost in the desert. As he crawls through the sands of time he tosses his necklace and soon after sees a vision of the desert ghost that leads him to a mysterious set of doors. Upon entering it, the wanderer is inside a church that worships a television set. The scene shifts to a poolside with a baptism underway. The wanderer is looking to find himself in a world full of rules, and by the end he sets off running from a power plant full of a crew in chemical biohazard suits looking to trap him in their own toxicity. The wanderer eventually rests in an industrial junkyard and finds the necklace he tossed earlier, realizing he had what he was searching for all along. The teenage band’s vision is in full display here, and that’s not the only reason to like them. Love Ghost is full of energy and promise with hard pounding drums, inspired vocals (reminiscent of Curt Cobain) and

something unique to this grunge act: the symphonic violin playing by member Mya Greene, who adds a touch of sophistication to the madness. This is a group that takes the best alternative acts of the 90s and translates their personal messages to apply to today’s youth. The band is on the rise, already having opened for Smash Mouth, The Tubes, Berlin, Ozomatli and Buckcherry. To see them live, check them out on their upcoming Los Angeles tour stops at The Roxy on Aug. 12 and at Echo Park Rising on Aug. 19. 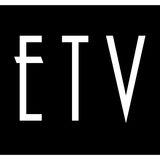 Enter the Venture is an indie music magazine featuring new releases, interviews, and reviews covering solo artists and bands from around the...

Enter the Venture is an indie music magazine featuring new releases, interviews, and reviews covering solo artists and bands from around the...