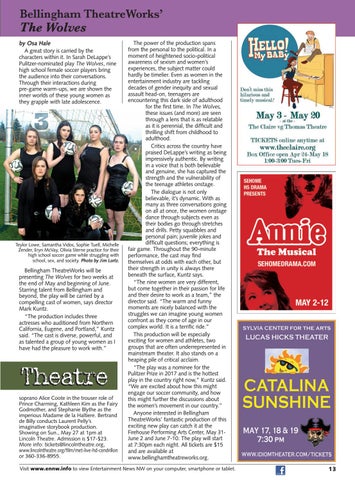 The Wolves by Osa Hale

A great story is carried by the characters within it. In Sarah DeLappe’s Pulitzer-nominated play The Wolves, nine high school female soccer players bring the audience into their conversations. Through their interactions during pre-game warm-ups, we are shown the inner worlds of these young women as they grapple with late adolescence.

Bellingham TheatreWorks will be presenting The Wolves for two weeks at the end of May and beginning of June. Starring talent from Bellingham and beyond, the play will be carried by a compelling cast of women, says director Mark Kuntz. “The production includes three actresses who auditioned from Northern California, Eugene, and Portland,” Kuntz said. “The cast is diverse, powerful, and as talented a group of young women as I have had the pleasure to work with.”

The power of the production spans from the personal to the political. In a moment of heightened socio-political awareness of sexism and women’s experiences, the subject matter could hardly be timelier. Even as women in the entertainment industry are tackling decades of gender inequity and sexual assault head-on, teenagers are encountering this dark side of adulthood for the first time. In The Wolves, these issues (and more) are seen through a lens that is as relatable as it is perennial, the difficult and thrilling shift from childhood to adulthood. Critics across the country have praised DeLappe’s writing as being impressively authentic. By writing in a voice that is both believable and genuine, she has captured the strength and the vulnerability of the teenage athletes onstage. The dialogue is not only believable, it’s dynamic. With as many as three conversations going on all at once, the women onstage dance through subjects even as their bodies go through stretches and drills. Petty squabbles and personal pain; juvenile jokes and difficult questions; everything is fair game. Throughout the 90-minute performance, the cast may find themselves at odds with each other, but their strength in unity is always there beneath the surface, Kuntz says. “The nine women are very different, but come together in their passion for life and their desire to work as a team,” the director said. “The warm and funny moments are nicely balanced with the struggles we can imagine young women confront as they come of age in our complex world. It is a terrific ride.” This production will be especially exciting for women and athletes, two groups that are often underrepresented in mainstream theater. It also stands on a heaping pile of critical acclaim. “The play was a nominee for the Pulitzer Prize in 2017 and is the hottest play in the country right now,” Kuntz said. “We are excited about how this might engage our soccer community, and how this might further the discussions about the women’s movement in our country.” Anyone interested in Bellingham TheatreWorks’ fantastic production of this exciting new play can catch it at the Firehouse Performing Arts Center, May 31June 2 and June 7-10. The play will start at 7:30pm each night. All tickets are $15 and are available at www.bellinghamtheatreworks.org.

Visit www.ennw.info to view Entertainment News NW on your computer, smartphone or tablet.