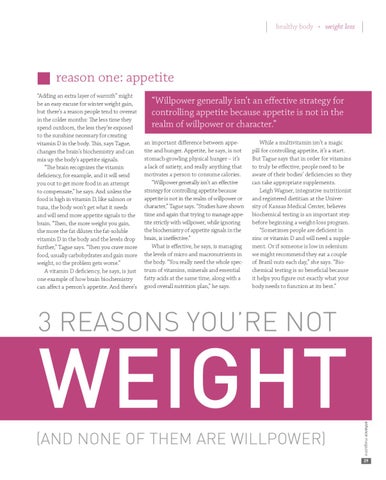 reason one: appetite “Adding an extra layer of warmth” might be an easy excuse for winter weight gain, but there’s a reason people tend to overeat in the colder months: The less time they spend outdoors, the less they’re exposed to the sunshine necessary for creating vitamin D in the body. This, says Tague, changes the brain’s biochemistry and can mix up the body’s appetite signals. “The brain recognizes the vitamin deficiency, for example, and it will send you out to get more food in an attempt to compensate,” he says. And unless the food is high in vitamin D, like salmon or tuna, the body won’t get what it needs and will send more appetite signals to the brain. “Then, the more weight you gain, the more the fat dilutes the fat-soluble vitamin D in the body and the levels drop further,” Tague says. “Then you crave more food, usually carbohydrates and gain more weight, so the problem gets worse.” A vitamin D deficiency, he says, is just one example of how brain biochemistry can affect a person’s appetite. And there’s

While a multivitamin isn’t a magic pill for controlling appetite, it’s a start. But Tague says that in order for vitamins to truly be effective, people need to be aware of their bodies’ deficiencies so they can take appropriate supplements. Leigh Wagner, integrative nutritionist and registered dietitian at the University of Kansas Medical Center, believes biochemical testing is an important step before beginning a weight-loss program. “Sometimes people are deficient in zinc or vitamin D and will need a supplement. Or if someone is low in selenium we might recommend they eat a couple of Brazil nuts each day,” she says. “Biochemical testing is so beneficial because it helps you figure out exactly what your body needs to function at its best.”

(and none of them are willpower)

New year, new you, and Enhance will help get you off to a healthy start this new year.