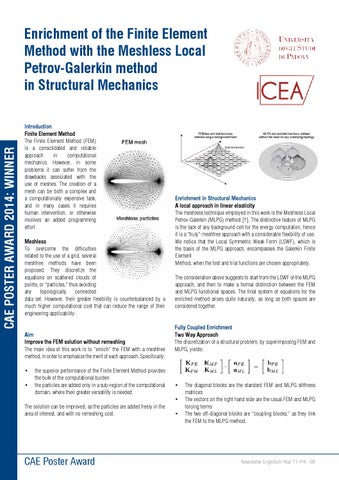 Enrichment of the Finite Element Method with the Meshless Local Petrov-Galerkin method in Structural Mechanics Introduction Finite Element Method The Finite Element Method (FEM) is a consolidated and reliable approach in computational mechanics. However, in some problems it can suffer from the drawbacks associated with the use of meshes. The creation of a mesh can be both a complex and a computationally expensive task, and in many cases it requires human intervention, or otherwise involves an added programming effort. Meshless To overcome the difficulties related to the use of a grid, several meshfree methods have been proposed. They discretize the equations on scattered clouds of points, or “particles,” thus avoiding any topologically connected data set. However, their greater flexibility is counterbalanced by a much higher computational cost that can reduce the range of their engineering applicability.

Aim Improve the FEM solution without remeshing The main idea of this work is to “enrich” the FEM with a meshfree method, in order to emphasize the merit of each approach. Specifically: • the superior performance of the Finite Element Method provides the bulk of the computational burden • the particles are added only in a sub-region of the computational domain, where their greater versatility is needed The solution can be improved, as the particles are added freely in the area of interest, and with no remeshing cost.

Enrichment in Structural Mechanics A local approach in linear elasticity The meshless technique employed in this work is the Meshless Local Petrov-Galerkin (MLPG) method [1]. The distinctive feature of MLPG is the lack of any background cell for the energy computation, hence it is a “truly” meshfree approach with a considerable flexibility of use. We notice that the Local Symmetric Weak Form (LSWF), which is the basis of the MLPG approach, encompasses the Galerkin Finite Element Method, when the test and trial functions are chosen appropriately. The consideration above suggests to start from the LSWF of the MLPG approach, and then to make a formal distinction between the FEM and MLPG functional spaces. The final system of equations for the enriched method arises quite naturally, as long as both spaces are considered together. 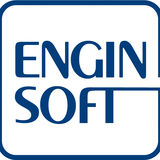