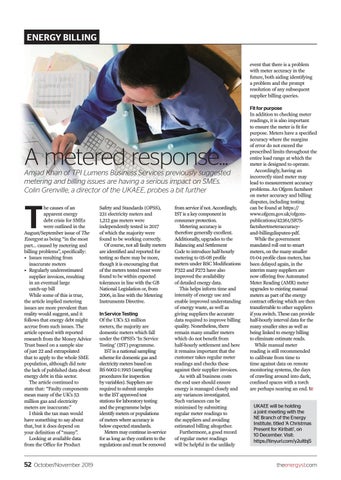 ENERGY BILLING event that there is a problem with meter accuracy in the future, both aiding identifying a problem and the prompt resolution of any subsequent supplier billing queries.

Amjad Khan of TPI Lumens Business Services previously suggested metering and billing issues are having a serious impact on SMEs. Colin Grenville, a director of the UKAEE, probes a bit further

he causes of an apparent energy debt crisis for SMEs were outlined in the August/September issue of The Energyst as being “in the most part… caused by metering and billing problems”, specifically: • Issues resulting from inaccurate meters • Regularly underestimated supplier invoices, resulting in an eventual large catch-up bill While some of this is true, the article implied metering issues are more prevalent than reality would suggest, and it follows that energy debt might accrue from such issues. The article opened with reported research from the Money Advice Trust based on a sample size of just 22 and extrapolated that to apply to the whole SME population, although did note the lack of published data about energy debt in this sector. The article continued to state that: “Faulty components mean many of the UK’s 53 million gas and electricity meters are inaccurate.” I think the tax man would have something to say about that, but it does depend on your definition of “many”. Looking at available data from the Office for Product

Safety and Standards (OPSS), 231 electricity meters and 1,212 gas meters were independently tested in 2017 of which the majority were found to be working correctly. Of course, not all faulty meters are identified and reported for testing so there may be more, though it is encouraging that of the meters tested most were found to be within expected tolerances in line with the GB National Legislation or, from 2006, in line with the Metering Instruments Directive. In Service Testing Of the UK’s 53 million meters, the majority are domestic meters which fall under the OPSS’s ‘In Service Testing’ (IST) programme. IST is a national sampling scheme for domestic gas and electricity meters based on BS 6002-1:1993 (sampling procedures for inspection by variables). Suppliers are required to submit samples to the IST approved test stations for laboratory testing and the programme helps identify meters or populations of meters where accuracy is below expected standards. Meters may continue in-service for as long as they conform to the regulations and must be removed

from service if not. Accordingly, IST is a key component in consumer protection. Metering accuracy is therefore generally excellent. Additionally, upgrades to the Balancing and Settlement Code to introduce half-hourly metering to 05-08 profile meters under BSC Modifications P322 and P272 have also improved the availability of detailed energy data. This helps inform time and intensity of energy use and enable improved understanding of energy waste, as well as giving suppliers the accurate data required to improve billing quality. Nonetheless, there remain many smaller meters which do not benefit from half-hourly settlement and here it remains important that the customer takes regular meter readings and checks these against their supplier invoices. As with all business costs the end user should ensure energy is managed closely and any variances investigated. Such variances can be minimised by submitting regular meter readings to the suppliers and avoiding estimated billing altogether. Furthermore, a good record of regular meter readings will be helpful in the unlikely

Fit for purpose In addition to checking meter readings, it is also important to ensure the meter is fit for purpose. Meters have a specified accuracy where the margins of error do not exceed the prescribed limits throughout the entire load range at which the meter is designed to operate. Accordingly, having an incorrectly sized meter may lead to measurement accuracy problems. An Ofgem factsheet on meter accuracy and billing disputes, including testing can be found at https:// www.ofgem.gov.uk/ofgempublications/42361/5875factsheetmeteraccuracyand-billingdisputes-pdf. While the government mandated roll out to smart meters, on the many smaller 01-04 profile class meters, has been delayed again, in the interim many suppliers are now offering free Automated Meter Reading (AMR) meter upgrades to existing manual meters as part of the energy contract offering which are then transferrable to other suppliers if you switch. These can provide half-hourly interval data for the many smaller sites as well as being linked to energy billing to eliminate estimate reads. While manual meter reading is still recommended to calibrate from time to time against data on remote monitoring systems, the days of crawling around into dark, confined spaces with a torch are perhaps nearing an end. te UKAEE will be holding a joint meeting with the NE Branch of the Energy Institute, titled ‘A Christmas Present for Kiribati’, on 10 December. Visit: https://tinyurl.com/y2ultbj5 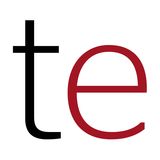