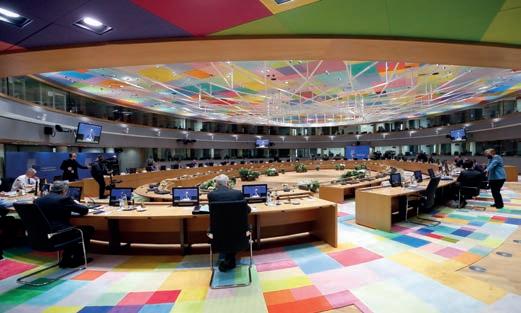 It’s nearly upon us now – the much anticipated and crucial international conference on going carbon neutral. Here, Nick Cottam looks at the background to COP26, its agenda and the role of the UK government in hosting, in partnership with Italy, the event.

When delegates gather for the COP26 climate change summit in Glasgow on 31 October, it will be against a sobering, arguably catastrophic backdrop of extreme weather trends and statistics. By all accepted measures the planet is warming and politicians, who frequently find it difficult to think further than next month rather than the next decade and beyond, are expected to act now to reverse this trend.

Acting now is a tall order by any standards but, with COVID-19 still circling and the global economy looking vulnerable in its wake, the task for delegates at this latest Conference of the Parties (as it is known), hosted by the UK in partnership with Italy, looks particularly challenging.

The 197 Parties, including the EU as an economic entity, are the signatories to the 1994 United Nations Framework Convention on Climate Change (UNFCC). This, in turn, is the parent treaty to the 2015 Paris Agreement to limit global temperature rises to a maximum of 2°C, and ideally to 1.5°C, by the end of the century. The question for delegates: How can this be done without wrecking economies and the prospect of a better life for some of the world’s most needy people?

‘There is a clear desire among governments to keep that 1.5°C in reach,’ says Alok Sharma, the UK government’s COP President- Designate. ‘The reality is we need to do far more in terms of action. The science shows us that to keep 1.5°C alive we must halve global emissions by 2030 and reach net zero emissions by mid-century.’

Energy and how to power the global economy – how to transition smoothly and affordably to a low-carbon lifestyle – is clearly at the heart of the conundrum facing this year’s COP delegates. How do you persuade China and Australia to give up their coal? How do you transition transport at scale from fossil to electric? And what really are the energy load-bearing options on the road to carbon net zero with hydrogen still in its infancy and nuclear both hugely expensive and divisive at all levels?

In the run-up to COP26, the science has produced another stark reminder of where we are in terms of global warming and the extreme events that are resulting from it. The latest report by the Intergovernmental Panel on Climate Change (IPCC) contains a barrage of statistics which confirm global warming and its extreme consequences.

For example, notes the report, in each of the last four decades, the world has been warmer than any decade that had preceded it since 1850. ‘In 2019,’ we learn that: ‘atmospheric CO2 concentrations were higher than at any time in the last two million years’. What’s more, it maintains: ‘Global temperature has increased faster since 1970 than in any other 50-year period over at least the last 2,000 years.’

So how do we reverse this trend? How fast can the global economy transition away from carbon-intensive fossils and how can this be done fairly for all countries, rich and poor? What further commitments can be made now for international action? These are among the key questions for COP26 delegates, which have been preceded by Sharma’s ‘further and faster’ battle cry as he jets carbon-intensively around the world to do the groundwork for Glasgow.

Sharma describes the IPCC report as the starkest warning yet that human behaviour is accelerating global warming. ‘This is why COP26 has to be the moment we get this right,’ he says. ‘We can’t afford to wait two years, five years, 10 years – this is the moment.’

Amid all the clamour for action and the hype surrounding potential solutions, COP26 has four clear goals which seek to advance the now familiar but still distant carbon neutral targets signed up to by the great majority of countries represented in Glasgow.

The number one target for COP26 is the need to secure global net zero by mid-century (an early UK commitment) and therefore to keep 1.5°C in reach. To do this, notes the COP preamble, the world must accelerate the phase out of coal (China and Australia take heed); curtail deforestation; speed up the switch to electric vehicles (EVs) and encourage more investment in renewables.

In another recent landmark report, the International Energy Agency (IEA) concurs that 1.5°C is indeed possible, but only by taking dramatic measures. For example, notes the IEA, where the sale of EVs is currently running at around 5% of global automobile sales annually, it will need to reach 60% by 2030. Annual renewable installations, which hit a record 280 GW in 2020, will need to exceed 1,000 GW by 2030; and energy efficiency improvements will need to grow by 4% annually, about three times the present rate. In this case it is arguably no overstatement that IEA Executive Director Fatih Birol describes the 1.5°C target as the greatest challenge mankind has ever faced.

Target number two for COP26 delegates is to adapt to protect communities and natural habitats. This you could say is the secondary nuts and bolts of addressing climate change and global warming. There has to be commitment to taking CO 2 and other harmful gases out of the atmosphere – but the world also has to adapt. We need more resilient infrastructure; better flood defences; more robust crops; and the technology to monitor, analyse and report on the impact of human activity on climate.

As Sharma notes in a foreword to COP26: ‘We must change the way we look after our land and seas and how we grow our food. This is also important if we want to protect and restore the world’s biodiversity, upon which all life depends.’

The third target, critical for delivering the first two and for turning promises into delivery, is to mobilise finance – not least the $100bn/y of climate finance deemed to be needed which was promised by rich countries back in 2009. At a time when the UK has cut its aid budget and other countries are counting their pennies in the face of COVID-19, climate change investment remains a priority in the developed world but also for those countries most in need.

As Mark Carney, the UN’s Climate Change Special Envoy, said recently: ‘Sustainable finance is mainstream. Soon it will just be finance, as climate risk is turned into the greatest commercial opportunity of our time.’

If this sounds a bit crass in the face of raging fires and communities destroyed by floods – part of a pattern of more frequent, more extreme weather events highlighted in the IPCC report – it is essential, urges Carney and others, if clean energy/climate adaptation are to be underwritten and viable in some of the most vulnerable parts of the world.

The bottom line, suggests Carney, is that: ‘Governments need credible and predictable policies which incentivise the transition by providing greater certainty for investment. COP26 will clarify how donors can meet and surpass the goal of mobilising the target of providing $100bn a year for developing economies.’

The fourth and final target for COP is to get countries to collaborate better, notably as they finalise the Paris rulebook which is designed to set course for that 1.5°C target, and agreeing how to accelerate the actions needed to get there.

Can President Biden’s US, for example, take leadership on this issue? Can countries such as China, India, Russia, Australia and Brazil be persuaded to come up with credible commitments and policies to cut emissions? And can COP shame rich countries into honouring the as yet unmet pledge of £100bn/y in climate finance for the developing world?

In its COP Presidency role, the UK has been keen to show leadership and the Johnson government has taken every opportunity to trumpet achievements to date. ‘The UK is leading the way,’ notes Sharma. ‘Over the last 30 years British governments have grown our economy by 78% while cutting emissions by 44%.’ He adds: ‘In 2012 40% of our electricity came from coal. That figure is now less than 2%.’ The emerging dominance of services over manufacturing and an abundance of offshore wind has undoubtedly helped.

So too, you could argue, has the growth in carbon offsetting and a reluctance to count carbon-intensive imports in the UK’s contribution to global warming. That said, this country continues to set robust climate change targets and introduce the policies and rules to meet them. The UK, Sharma reminds us, was the first country to pledge to reduce carbon emissions by 78% by 2035 and to completely phase out coal power by 2024.

While Paris was a landmark COP for agreeing the 1.5°C target, Glasgow has to produce its own landmark agreements on how to get there. With no meeting last year because of the pandemic, countries have an obligation, as agreed in Paris, to provide a five-year update on their Nationally Determined Contributions (NDCs) to cutting emissions.

This is the prime reason for all those Sharma air miles prior to the event – NDCs must add up to international agreement and action. Laggards like Brazil and China must agree to improve their performance. Over the 11 days of the conference there will be 190 world leaders and thousands of negotiators trying to ensure the conference produces achievable, agreed actions to cut global carbon emissions in line with that overriding 1.5°C target.

In the UK, as in other countries, national targets have been to develop carbon cutting programmes at individual sector and local level. There are some ambitious targets, for example, for supporting net zero in the North Sea as part of the North Sea Transition Deal, a partnership between the UK government and trade association Oil & Gas UK.

These targets include cutting production emissions by 50% by 2030, investing up to £3bn in carbon capture, use and storage (CCUS) and supporting the scaling up of low-carbon hydrogen production.

Further afield, UK government minister Anne-Marie Trevelyan, who is also the government’s International Champion on Adaptation and Resilience for the COP26 presidency, has announced the formation of a new Adaptation Research Alliance which will be launched at the summit. Research into climate adaptation, she notes, needs to be locally driven and responsive to local needs.

‘In my role, I am acutely aware of the need to listen to and work with countries on the frontline of climate change to drive forward global action on adaptation to the impacts and avert, minimise and address loss and damage,’ said Trevelyan.

If ever there was an occasion for turning words into actions, it is COP26.