The EU and US take different approaches to CCS 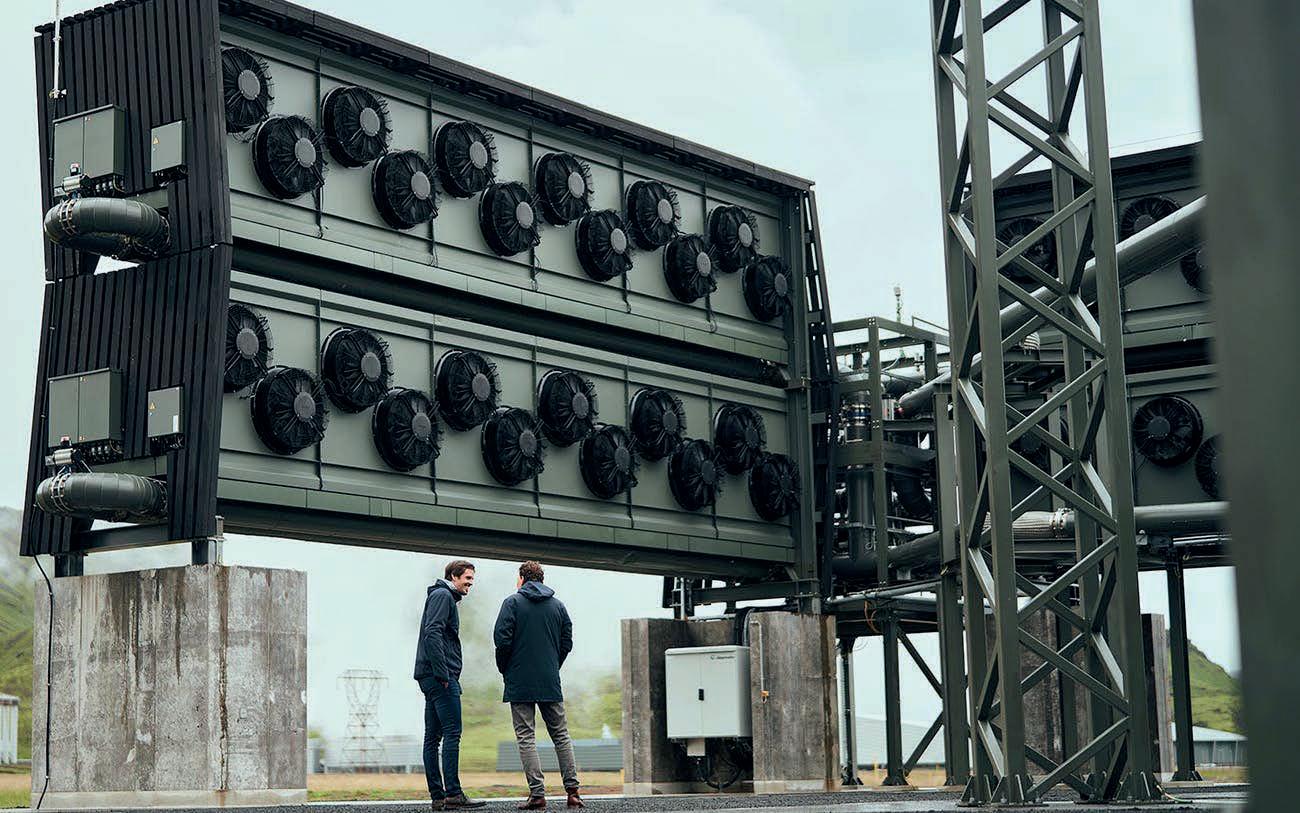 The challenging costs of CCS

While European developers favour collaborative carbon capture ‘hubs’, the US is developing the technology at individual sites. What could this mean for the global growth of CCS? Laura Syrett investigates.

European and US interest in carbon capture and storage (CCS) and carbon capture, utilisation and storage (CCUS) is continuing to surge as governments make ever more ambitious climate change commitments. Improvements in technology mean that capturing the CO2 emitted from industrial processes – and either sequestering it or using it elsewhere – is no longer a marginal solution with limited applications.

‘In the past decade, we’ve seen a shift from thinking about CCUS as being a coal-fired power plant with CCS bolted on, to regarding it far more as an emissions-reduction solution for industrial activities with shared CO2 transport and storage infrastructure,’ explains Samantha McCulloch, Head of the carbon capture utilisation and storage unit at the International Energy Agency (IEA).

‘An often-overlooked strength of CCS is its ability to allow workers and industries that would otherwise be substantially disrupted by the energy transition to instead be vital contributors to achieving net zero,’ adds the spokesperson.

Europe currently has just two operating CCS facilities, the Sleipner and Snøhvit plants, both located in Norway, running since 1996 and 2008, respectively. But there are now more than 40 projects in the pipeline across 13 European countries.

The Sleipner facility separates close to 1mn tonnes of CO2 per year from the processing of natural gas extracted from the Sleipner Vest and Utgard gas fields, offshore southwest Norway. The CO2 is then stored in the Utsira sandstone formation close to Sleipner Vest.

Meanwhile, the Snøhvit facility is located on the island of Melkøya off the northern Norwegian coast and separates CO2 from the well stream of natural gas from the Snøhvit field in the Barents Sea. The CO2 is then transported back to the Snøhvit field by pipeline and injected into a subsea formation. During normal operations, up to 700,000 tonnes of CO2 are stored at Snøhvit per year.

Of the 40+ projects close to coming online in Europe, the Northern Lights facility, also in Norway, is an example of best practice in terms of its design and policy support, according to Lee Beck, International Director, Carbon Capture at the Bostonheadquartered Clean Air Task Force (CATF). A joint project between energy majors Equinor, Shell and Total, Northern Lights aims to transport, inject and store up to 1.5mn tonnes of CO2 per year in its initial phase.

The project is supported by $2bn of funding from the Norwegian government – enough to cover the project’s entire capex and 10 years of operating costs. The facility aims to capture CO2 primarily from a cement plant in Oslo – and potentially from a nearby waste-to-energy facility – before transporting it 100 km off the Norwegian coast and storing it 2,500 m below the seabed, south of the Troll natural gas and oil field.

Northern Lights’ developers say they are also in discussions with multiple other facilities in Europe, who may want to feed into its open-access CO2 transport and storage infrastructure.

Another advanced example of this collective model is the Porthos project in the Netherlands, which has received close to $2bn in subsidies from the Dutch government and the European Union. The funding will enable the facility to link up with multiple CO2 emitters at the Port of Rotterdam, feeding into shared CO2 transport infrastructure connected to offshore storage in empty North Sea gas fields. In its early years, the project is expected to store approximately 2.5mn tonnes of CO2 per year.

While Europe is behind the US in terms of operational CCS facilities, European projects are designed to be the ‘next generation’ of CCS, according to Beck. They are largely based around ‘hubs’ of industrial emitters feeding into shared CO2 storage and infrastructure. This approach brings a number of advantages, such as economies of scale and reduced complexity, as well as enabling the capture and storage of smaller volumes of CO2 from a wider range of emitters.

‘European governments are front-loading investment into transport and storage infrastructure to enable economies of scale,’ Beck explains. She said the pattern in Europe is that of big first movers who put forward plans and secure investment before inviting other facilities to feed into their infrastructure. This model allows dedicated transport and storage providers to operate that infrastructure, rather than – as is more common in the US – expecting the industrial emitter to take on those responsibilities.

Support for CCUS has certainly been encouraged by the net zero commitments made across Europe, stresses McCulloch. ‘Higher carbon prices are also starting to improve the business case for CCUS investment and – most importantly – there is targeted support and funding, particularly in Norway, the Netherlands and the UK.’

That said, a lack of prepared CO2 storage capacity and the difficulty of getting sites approved has slowed progress in Europe. The EU’s theoretical CO2 storage capacity is more than 300bn tonnes, around half of which is offshore, enough for around 100 years of current emissions according to the CATF.

McCulloch thinks it will be a challenge to ensure storage sites are adequately characterised and developed within a timeframe that matches emissions-reduction goals. ‘There is a real prospect of demand for storage outstripping supply in the near-to-medium term,’ she warns.

CCS in the US

The US has fewer such problems given there are 12 CCS projects already in operation (plus two suspended facilities), in Illinois, Kansas, Louisiana, Michigan, North Dakota, Oklahoma, Texas and Wyoming, with a further five just over the border in central Canada. And – like Europe – the US has more than 40 projects under development.

The US’s oldest operating CCS facility, according to the GCCSI database, is the Terrell Natural Gas Processing Plant, which began operating in 1972 to separate, capture and store up to 400,000 tonnes of CO2 per year from natural gas processing in the Permian Basin.

The country’s newest fully-operational plant is the Illinois Industrial Sources Carbon Capture and Storage (IISCCS) project in Decatur, Illinois, which began operating in 2017 to capture and store CO2 from corn processing by US food producer ADM. IISCCS is permitted to operate until the end of 2022, with the potential to store up to 5.5mn tonnes of CO2 in total. In May this year, ADM and the University of Illinois announced the completion of a second CCS facility, the Illinois Basin – Decatur Project (IBDP), which once operational aims to capture and store up to 1mn tonnes of CO2 from the corn processing plant over a period of three years. Both of ADM’s facilities feed into dedicated geologic storage, 2,000 m underground in the Mount Simon Sandstone formation in Illinois.

While ‘hub’ approaches to CCS deployment are being explored in North America (notably in relation to ethanol-based projects in the Midwest), the US’s CCS projects are mostly ‘single source, single sink’, meaning that each project comprises a carbon capture plant with dedicated infrastructure for one storage site.

The majority of the 40+ CCS projects announced in the US since its landmark 45Q tax reform in 2018 are close to existing storage sites. The US currently has the best outlook globally for geologic storage, able to store ‘hundreds of years of emissions’, Beck says, which has encouraged CCS projects to cluster around storage locations. But the CATF notes that one weakness, compared to European projects, is the lack of relatively sophisticated infrastructure that would make hub facilities more viable. A key reason is that government policy has lagged behind the needs of the industry, initially offering tax incentives for capturing CO2 without corresponding support for transport and storage.

However, this is beginning to change. On 10 August 2021, the US senate passed the $1tn bipartisan infrastructure bill, which includes the SCALE Act (Storing CO2 and Lowering Emissions Act), which will support the financing and construction of CO2 transport and storage infrastructure.

Such government backing should make lenders more willing to finance CCS projects on competitive terms. ‘Everyone says that carbon capture is expensive, but from a climate perspective, $50 or $100 per tonne of CO2 is not expensive to reduce emissions. What is expensive is the inability to obtain affordable financing’, Beck explains.

CCS is also touted as a key enabling technology for the growing hydrogen economy, which in turn is seen as a low/no-carbon fuel of the future for transport and industry. The majority of hydrogen produced for industrial applications is currently derived from steam methane reformation (SMR), which produces ‘grey hydrogen’ with CO2 emissions associated with the combustion of natural gas.

To get to cleaner ‘blue’ hydrogen, the majority of CO2 must be removed by CCS. Across North America, there are a total of seven CCS facilities with blue hydrogen production facilities, according to the GCCSI. Beck believes that through growing climate ambition and more attractive business cases, the appeal of CCS is starting to trump industry’s longstanding hesitance.

The GCCSI thinks that a more forceful approach to project development is warranted. ‘To reach international climate targets, we cannot continue at the pace of deployment that we have seen in the past. We need to increase the number of CCS facilities by a 100-fold for international climate targets to be reached,’ its spokesperson tells Energy World.