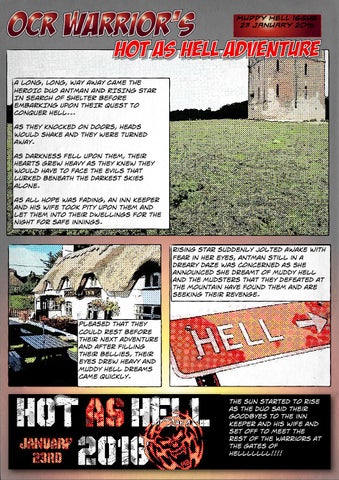 A lONG, LONG, WAY AWAY CAME THE HEROIC DUO ANTMAN AND RISING STAR IN SEARCH OF SHELTER BEFORE EMBARKING UPON THEIR quest to conquer hell... As they knocked on doors, heads would shake and they were turned away. as darkness fell upon them, their hearts grew heavy as they knew they would have to face the evils that lurked beneath the darkest skies alone. As all hope was fading, an inn keeper and his wife took pity upon them and let them into their dwellings for the night for safe innings.

rising star suddenly jolted awake with fear in her eyes, antman still in a dreary daze was concerned as she announced she dreamt of muddy hell and the mudsters that they defeated at the mountain have found them and are seeking their revenge.

pleased that they could rest before their next adventure and after filling their bellies, their eyes drew heavy and muddy hell dreams came quickly.

the sun started to rise as the duo said their goodbyes to the inn keeper and his wife and set off to meet the rest of the warriors at the gates of helllllll!!!! It looks like the OCR Warriors returned for another pottering adventure at Muddy Hell.

It looks like the OCR Warriors returned for another pottering adventure at Muddy Hell.