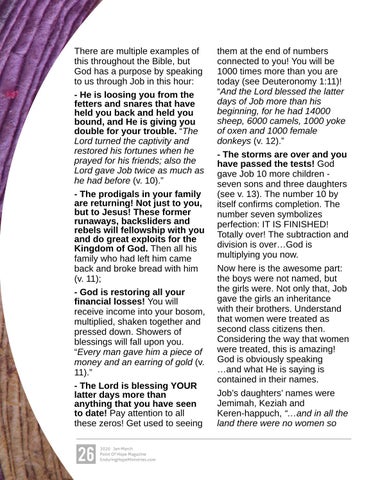 There are multiple examples of this throughout the Bible, but God has a purpose by speaking to us through Job in this hour: - He is loosing you from the fetters and snares that have held you back and held you bound, and He is giving you double for your trouble. ?The Lord turned the captivity and restored his fortunes when he prayed for his friends; also the Lord gave Job twice as much as he had before (v. 10).? - The prodigals in your family are returning! Not just to you, but to Jesus! These former runaways, backsliders and rebels will fellowship with you and do great exploits for the Kingdom of God. Then all his family who had left him came back and broke bread with him (v. 11); - God is restoring all your financial losses! You will receive income into your bosom, multiplied, shaken together and pressed down. Showers of blessings will fall upon you. ?Every man gave him a piece of money and an earring of gold (v. 11).? - The Lord is blessing YOUR latter days more than anything that you have seen to date! Pay attention to all these zeros! Get used to seeing

them at the end of numbers connected to you! You will be 1000 times more than you are today (see Deuteronomy 1:11)! ?And the Lord blessed the latter days of Job more than his beginning, for he had 14000 sheep, 6000 camels, 1000 yoke of oxen and 1000 female donkeys (v. 12).? - The storms are over and you have passed the tests! God gave Job 10 more children seven sons and three daughters (see v. 13). The number 10 by itself confirms completion. The number seven symbolizes perfection: IT IS FINISHED! Totally over! The subtraction and division is over? God is multiplying you now. Now here is the awesome part: the boys were not named, but the girls were. Not only that, Job gave the girls an inheritance with their brothers. Understand that women were treated as second class citizens then. Considering the way that women were treated, this is amazing! God is obviously speaking ? and what He is saying is contained in their names. Job?s daughters?names were Jemimah, Keziah and Keren-happuch, ?? and in all the land there were no women so 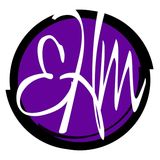 Point Of Hope Magazine is a publication of Enduring Hope Ministries

Point Of Hope Magazine is a publication of Enduring Hope Ministries