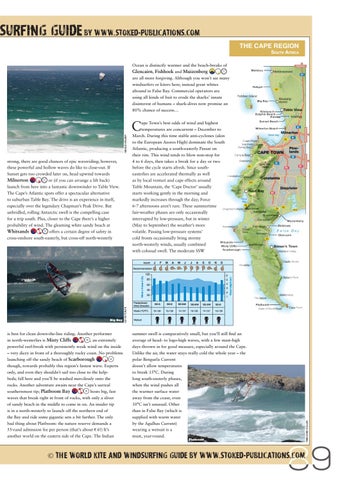 Ocean is distinctly warmer and the beach-breaks of

Glencairn, Fishhoek and Muizenberg are all more forgiving. Although you won’t see many windsurfers or kiters here; instead great whites abound in False Bay. Commercial operators are using all kinds of bait to erode the sharks’ innate disinterest of humans – shark-dives now promise an 80% chance of success…

temperatures are concurrent – December to

strong, there are good chances of epic waveriding; however, these powerful and hollow waves do like to close-out. If Sunset gets too crowded later on, head upwind towards Milnerton or (if you can arrange a lift back) launch from here into a fantastic downwinder to Table View. The Cape’s Atlantic spots offer a spectacular alternative to suburban Table Bay. The drive is an experience in itself, especially over the legendary Chapman’s Peak Drive. But unbridled, rolling Antarctic swell is the compelling case for a trip south. Plus, closer to the Cape there’s a higher probability of wind. The gleaming white sandy beach at Whitsands offers a certain degree of safety in cross-onshore south-easterly, but cross-off north-westerly

March. During this time stable anti-cyclones (akin to the European Azores High) dominate the South Atlantic, producing a south-easterly Passat on their rim. This wind tends to blow non-stop for 4 to 6 days, then takes a break for a day or two before the cycle starts afresh. Since southeasterlies are accelerated thermally as well as by local venturi and cape effects around Table Mountain, the ‘Cape Doctor’ usually starts working gently in the morning and markedly increases through the day; Force 6-7 afternoons aren’t rare. These summertime fair-weather phases are only occasionally interrupted by low-pressure, but in winter (May to September) the weather’s more volatile. Passing low-pressure systems’ cold fronts occasionally bring stormy north-westerly winds, usually combined with colossal swell. The moderate SSW Month

is best for clean down-the-line riding. Another performer , an extremely in north-westerlies is Misty Cliffs powerful reef-break with persistently weak wind on the inside – very dicey in front of a thoroughly rocky coast. No problems launching off the sandy beach of Scarborough though, towards probably this region’s fastest wave. Experts only, and even they shouldn’t sail too close to the kelpbeds; fall here and you’ll be washed mercilessly onto the rocks. Another adventure awaits near the Cape’s surreal southernmost tip; Platboom Bay hosts big, fast waves that break right in front of rocks, with only a sliver of sandy beach in the middle to come in on. An insider tip is in a north-westerly to launch off the northern end of the Bay and ride some gigantic sets a bit further. The only bad thing about Platboom: the nature reserve demands a 55-rand admission fee per person (that’s about € 6!) It’s another world on the eastern side of the Cape. The Indian

summer swell is comparatively small, but you‘ll still find an average of head- to logo-high waves, with a few mast-high days thrown in for good measure, especially around the Cape. Unlike the air, the water stays really cold the whole year – the polar Benguela Current doesn’t allow temperatures to break 15°C. During long south-easterly phases, when the wind pushes all the warmer surface water away from the coast, even 10°C isn’t unusual. Other than in False Bay (which is supplied with warm water by the Agulhas Current) wearing a wetsuit is a must, year-round. Platboom

© THE WORLD KITE AND WINDSURFING GUIDE by www.stoked-publications.com