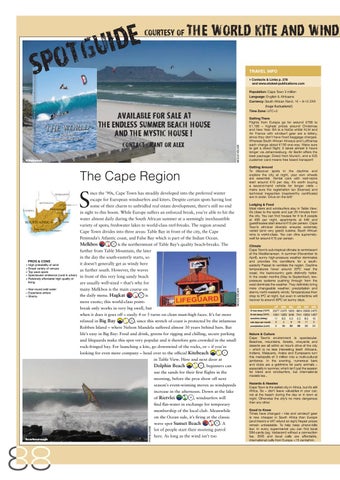 THE WORLD KITE AND WINDS

available for sale at the Endless Summer Beach House and the Mystic House !!

Getting Around To discover spots in the daytime and explore the city at night, your own wheels are essential. Rental cars with roof-racks start around €15 per day. It’s worth buying a second-hand vehicle for longer visits – make sure the registration tax (license) and technical inspection (roadworthy certificate) are in order. Drive on the left!

Lodging &amp; Food Most kiters and windsurfers stay in Table View; it’s close to the spots and just 20 minutes from the city. You can find houses for 6 to 8 people at €90 per night, apartments at €40 and guesthouses start around €15 per person. Cape Town’s ethnical diversity ensures extremely varied (and very good) cuisine; South African wine is world-class. You can dine supremelywell for around €15 per person.

ince the ’90s, Cape Town has steadily developed into the preferred winter escape for European windsurfers and kiters. Despite certain spots having lost some of their charm to unbridled real estate development, there‘s still no end in sight to this boom. While Europe suffers an enforced break, you’re able to hit the water almost daily during the South African summer at a seemingly inexhaustible variety of spots; freshwater lakes to world-class reef-breaks. The region around Cape Town divides into three areas: Table Bay in front of the city, the Cape Peninsula’s Atlantic coast, and False Bay which is part of the Indian Ocean. Melkbos is the northernmost of Table Bay’s quality beach-breaks. The further from Table Mountain, the later in the day the south-easterly starts, so it doesn’t generally get as windy here as further south. However, the waves in front of this very long sandy beach are usually well-sized – that’s why for many Melkbos is the main course on the daily menu. Hagkat is more exotic; this world-class pointbreak only works in very big swell, but when it does it goes off – easily 4 or 5 turns on clean mast-high faces. It’s far more relaxed in Big Bay , since this stretch of coast is protected by the infamous Robben Island – where Nelson Mandela suffered almost 30 years behind bars. But life’s easy in Big Bay: Food and drink, greens for rigging and chilling, secure parking and lifeguards make this spot very popular and it therefore gets crowded in the small rock-fringed bay. For launching a kite, go downwind of the rocks, or – if you’re looking for even more company – head over to the official Kitebeach in Table View. Here and next door at Dolphin Beach , beginners can use the sands for their first flights in the morning, before the pros show off next season’s event-winning moves as windspeeds increase in the afternoon. Down at the lake of Rietvlei , windsurfers will find flat-water in exchange for temporary membership of the local club. Meanwhile on the Ocean side, it’s firing at the classic wave spot Sunset Beach .A lot of people start their morning patrol here. As long as the wind isn’t too

Getting There Flights from Europe go for around €700 to €1,100 – highest prices around Christmas and New Year. BA is a NoGo whilst KLM and Air France with windsurf gear are a lottery, since they don’t have fixed baggage charges. Whereas South African Airways and Lufthansa each charge about €130 one-way. Make sure to get a direct flight; it takes almost 6 hours longer via Johannesburg. Air Berlin offers the best package: Direct from Munich, and a €25 customer card means free board transport!

Climate Cape Town’s sub-tropical climate is reminiscent of the Mediterranean. In summer (November to April), sunny high-pressure weather dominates and provides the conditions for a southeasterly Passat to ventilate the region. Daytime temperatures hover around 25°C near the coast, the backcountry gets distinctly hotter. In the cooler months (May to September), lowpressure systems pushing through from the west dominate the weather. They definitely bring more changeable weather; precipitation and stormy north-westerly winds. Temperatures then drop to 5°C at night, but even in wintertime will recover to around 20°C on sunny days. J/F 26/77 16/61 sunshine (h/day) 11 rain days per month 2 precipitation (L/m²) 6 Ø max temp (°C/°F) Ø min temp (°C/°F)

Nature &amp; Culture Cape Town’s environment is spectacular. Beaches, mountains, forests, vineyards and deserts are all within an hour’s drive of the city – which is no less interesting itself: Africans, Indians, Malayans, Arabs and Europeans turn this metropolis of 3 million into a multi-cultural jamboree. In the evening, numerous bars and clubs are a goldmine for party animals – especially in summer, which isn’t just the season for kiters and windsurfers, but international models too... Hazards &amp; Hassles Cape Town is the safest city in Africa, but it’s still Africa. So – don’t leave valuables in your car; not at the beach during the day or in town at night. Otherwise the city’s no more dangerous than any other. Good to Know Times have changed – kite and windsurf gear is now cheaper in South Africa than Europe (and there’s a VAT refund on top!) Repair prices remain unbeatable. To help keep phone-bills low: In every supermarket you can find local SIM-cards (eg; Vodacom) without a connection fee. SMS and local calls are affordable, international calls from Europe &lt;15 cents/min.