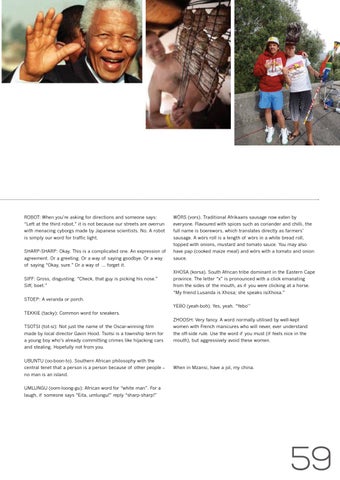 ROBOT: When you’re asking for directions and someone says: “Left at the third robot,” it is not because our streets are overrun with menacing cyborgs made by Japanese scientists. No. A robot is simply our word for traffic light. SHARP-SHARP: Okay. This is a complicated one. An expression of agreement. Or a greeting. Or a way of saying goodbye. Or a way of saying “Okay, sure.” Or a way of … forget it. SIFF: Gross, disgusting. “Check, that guy is picking his nose.” Siff, boet.”

WÖRS (vors). Traditional Afrikaans sausage now eaten by everyone. Flavoured with spices such as coriander and chilli, the full name is boerewors, which translates directly as farmers’ sausage. A wörs roll is a length of wörs in a white bread roll, topped with onions, mustard and tomato sauce. You may also have pap (cooked maize meal) and wörs with a tomato and onion sauce. XHOSA (korsa). South African tribe dominant in the Eastern Cape province. The letter “x” is pronounced with a click emanating from the sides of the mouth, as if you were clicking at a horse. “My friend Lusanda is Xhosa; she speaks isiXhosa.”

STOEP: A veranda or porch. YEBO (yeah-boh). Yes, yeah. “Yebo’’ TEKKIE (tacky): Common word for sneakers. TSOTSI (tot-si): Not just the name of the Oscar-winning film made by local director Gavin Hood. Tsotsi is a township term for a young boy who’s already committing crimes like hijacking cars and stealing. Hopefully not from you. UBUNTU (oo-boon-to). Southern African philosophy with the central tenet that a person is a person because of other people – no man is an island.

ZHOOSH: Very fancy. A word normally utilised by well-kept women with French manicures who will never, ever understand the off-side rule. Use the word if you must (if feels nice in the mouth), but aggressively avoid these women.

When in Mzansi, have a jol, my china.