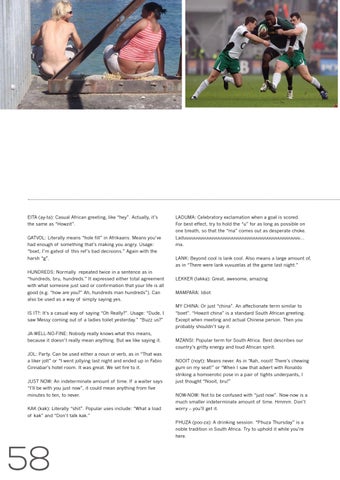 EITA (ay-ta): Casual African greeting, like “hey”. Actually, it’s the same as “Howzit”. GATVOL: Literally means “hole fill” in Afrikaans. Means you’ve had enough of something that’s making you angry. Usage: “boet, I’m gatvol of this ref’s bad decisions.” Again with the harsh “g”. HUNDREDS: Normally repeated twice in a sentence as in “hundreds, bru, hundreds.” It expressed either total agreement with what someone just said or confirmation that your life is all good (e.g. “how are you?” Ah, hundreds man hundreds”). Can also be used as a way of simply saying yes. IS IT?: It’s a casual way of saying “Oh Really?”. Usage: “Dude, I saw Messy coming out of a ladies toilet yesterday.” “Buzz us?” JA-WELL-NO-FINE: Nobody really knows what this means, because it doesn’t really mean anything. But we like saying it. JOL: Party. Can be used either a noun or verb, as in “That was a liker jolt” or “I went jollying last night and ended up in Fabio Cinnabar’s hotel room. It was great. We set fire to it. JUST NOW: An indeterminate amount of time. If a waiter says “I’ll be with you just now”, it could mean anything from five minutes to ten, to never. KAK (kak): Literally “shit”. Popular uses include: “What a load of kak” and “Don’t talk kak.”

LADUMA: Celebratory exclamation when a goal is scored. For best effect, try to hold the “u” for as long as possible on one breath, so that the “ma” comes out as desperate choke. Laduuuuuuuuuuuuuuuuuuuuuuuuuuuuuuuuuuuuuuuuuuu… ma. LANK: Beyond cool is lank cool. Also means a large amount of, as in “There were lank vuvuzelas at the game last night.” LEKKER (lakka): Great, awesome, amazing MAMPARA: Idiot MY CHINA: Or just “china”. An affectionate term similar to “boet”. “Howzit china” is a standard South African greeting. Except when meeting and actual Chinese person. Then you probably shouldn’t say it. MZANSI: Popular term for South Africa. Best describes our country’s gritty energy and loud African spirit. NOOIT (noyt): Means never. As in “Aah, nooit! There’s chewing gum on my seat!” or “When I saw that advert with Ronaldo striking a homoerotic pose in a pair of tights underpants, I just thought “Nooit, bru!” NOW-NOW: Not to be confused with “just now”. Now-now is a much smaller indeterminate amount of time. Hmmm. Don’t worry – you’ll get it. PHUZA (poo-za): A drinking session. “Phuza Thursday” is a noble tradition in South Africa. Try to uphold it while you’re here.