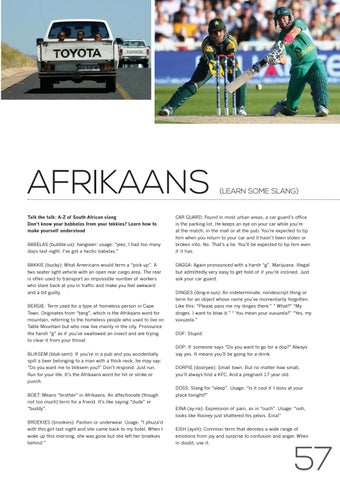 AFRIKAANS Talk the talk: A-Z of South African slang Don’t know your babbelas from your tekkies? Learn how to make yourself understood BABELAS (bubble-us): hangover: usage: “jeez, I had too many dops last night. I’ve got a hectic babelas.” BAKKIE (bucky): What Americans would term a “pick up”. A two seater light vehicle with an open rear cargo area. The rear is often used to transport an impossible number of workers who stare back at you in traffic and make you feel awkward and a bit guilty. BERGIE: Term used for a type of homeless person in Cape Town. Originates from “berg”, which is the Afrikaans word for mountain, referring to the homeless people who used to live on Table Mountain but who now live mainly in the city. Pronounce the harsh “g” as if you’ve swallowed an insect and are trying to clear it from your throat. BLIKSEM (bluk-sem): If you’re in a pub and you accidentally spill a beer belonging to a man with a thick neck, he may say: “Do you want me to bliksem you?” Don’t respond. Just run. Run for your life. It’s the Afrikaans word for hit or strike or punch. BOET: Means “brother” in Afrikaans. An affectionate (though not too much) term for a friend. It’s like saying “dude” or “buddy”. BROEKIES (brookies): Panties or underwear. Usage: “I phuza’d with this girl last night and she came back to my hotel. When I woke up this morning, she was gone but she left her broekies behind.”

CAR GUARD: Found in most urban areas, a car guard’s office is the parking lot. He keeps an eye on your car while you’re at the match, in the mall or at the pub. You’re expected to tip him when you return to your car and it hasn’t been stolen or broken into. No. That’s a lie. You’ll be expected to tip him even if it has. DAGGA: Again pronounced with a harsh “g”. Marijuana. Illegal but admittedly very easy to get hold of if you’re inclined. Just ask your car guard. DINGES (ding-e-sus): An indeterminate, nondescript thing or term for an object whose name you’ve momentarily forgotten. Like this: “Please pass me my dinges there.” “ What?” “My dinges. I want to blow it.” “ You mean your vuvuzela?” “Yes, my vuvuzela.” DOF: Stupid. DOP: If someone says “Do you want to go for a dop?” Always say yes. It means you’ll be going for a drink. DORPIE (doorpee): Small town. But no matter how small, you’ll always find a KFC. And a pregnant 17 year old. DOSS: Slang for “sleep”. Usage: “Is it cool if I doss at your place tonight?” EINA (ay-na): Expression of pain, as in “ouch”. Usage: “ooh, looks like Rooney just shattered his pelvis. Eina!” EISH (aysh): Common term that denotes a wide range of emotions from joy and surprise to confusion and anger. When in doubt, use it.