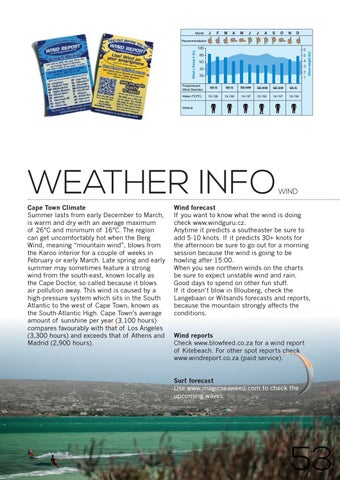 is best for clean down-the-line riding. Another performer in north-westerlies is Misty Cliffs

powerful reef-break with persistently weak wind on the inside – very dicey in front of a thoroughly rocky coast. No problems

summer swell is comparatively small, but you‘ll still find an average of head- to logo-high waves, with a few mast-high days thrown in for good measure, especially around the Cape.

launching off the sandy beach of Scarborough

Unlike the air, the water stays really cold the whole year – the polar Benguela Current

though, towards probably this region’s fastest wave. Experts only, and even they shouldn’t sail too close to the kelp-

WEATHER INFO when the wind pushes all the warmer surface water

Wind awayforecast from the coast, even If 10°C you want to know what the wind is doing isn’t unusual. Other check www.windguru.cz. is warm and dry with an average maximum is in a north-westerly to launch off the northern end of than in False Bay (which is Anytime it predicts a southeaster be sure to of 26°C and minimum of 16°C. The region the Bay and ride some gigantic sets a bit further. The only supplied with warm water add 5-10 knots. If it predicts 30+ knots for can get uncomfortably hot when the Berg bad thing Platboom: the naturewind”, reserve demands a the Agulhasbe Current) thebyafternoon sure to go out for a morning Wind,about meaning “mountain blows from 55-rand fee per person (that’s about € 6!) It’sin wearingbecause a wetsuit the is a wind is going to be session the admission Karoo interior for a couple of weeks another world on eastern side ofLate the Cape. Theand Indian must, year-round. after 15:00. February orthe early March. spring early howling Platboom When you see northern winds on the charts summer may sometimes feature a strong be sure to expect unstable wind and rain. wind from the south-east, known locally as Good days to spend on other fun stuff. the Cape Doctor, so called because it blows © THE WORLD KITE AND WINDSURFING GUIDE by www.stoked-pu air pollution away. This wind is caused by a If it doesn’t blow in Blouberg, check the Langebaan or Witsands forecasts and reports, high-pressure system which sits in the South Atlantic to the west of Cape Town, known as because the mountain strongly affects the the South-Atlantic High. Cape Town’s average conditions. amount of sunshine per year (3,100 hours) compares favourably with that of Los Angeles (3,300 hours) and exceeds that of Athens and Wind reports Madrid (2,900 hours). Check www.blowfeed.co.za for a wind report of Kitebeach. For other spot reports check www.windreport.co.za (paid service). Cape Townright Climate waves that break in front of rocks, with only a sliver Summer lasts from early December to March, of sandy beach in the middle to come in on. An insider tip

Surf forecast Use www.magicseaweed.com to check the upcoming waves.