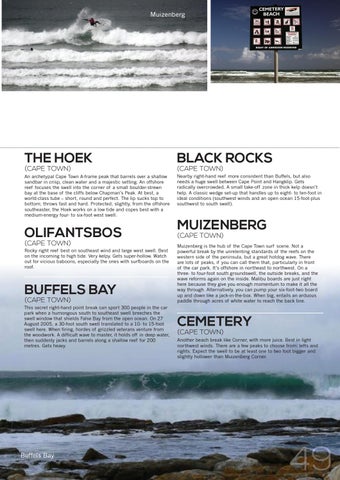 An archetypal Cape Town A-frame peak that barrels over a shallow sandbar in crisp, clean water and a majestic setting. An offshore reef focuses the swell into the corner of a small boulder-strewn bay at the base of the cliffs below Chapman’s Peak. At best, a world-class tube – short, round and perfect. The lip sucks top to bottom; throws fast and hard. Protected, slightly, from the offshore southeaster, the Hoek works on a low tide and copes best with a medium-energy four- to six-foot west swell.

Nearby right-hand reef more consistent than Buffels, but also needs a huge swell between Cape Point and Hangklip. Gets radically overcrowded. A small take-off zone in thick kelp doesn’t help. A classic wedge set-up that handles up to eight- to ten-foot in ideal conditions (southwest winds and an open ocean 15-foot-plus southwest to south swell).

Rocky right reef best on southeast wind and large west swell. Best on the incoming to high tide. Very kelpy. Gets super-hollow. Watch out for vicious baboons, especially the ones with surfboards on the roof.

This secret right-hand point break can sport 300 people in the car park when a humongous south to southeast swell breeches the swell window that shields False Bay from the open ocean. On 27 August 2005, a 30-foot south swell translated to a 10- to 15-foot swell here. When firing, hordes of grizzled veterans venture from the woodwork. A difficult wave to master, it holds off in deep water, then suddenly jacks and barrels along a shallow reef for 200 metres. Gets heavy.

Muizenberg is the hub of the Cape Town surf scene. Not a powerful break by the unrelenting standards of the reefs on the western side of the peninsula, but a great hotdog wave. There are lots of peaks, if you can call them that, particularly in front of the car park. It’s offshore in northeast to northwest. On a three- to four-foot south groundswell, the outside breaks, and the wave reforms again on the inside. Malibu boards are just right here because they give you enough momentum to make it all the way through. Alternatively, you can pump your six-foot-two board up and down like a jack-in-the-box. When big, entails an arduous paddle through acres of white water to reach the back line.

Another beach break like Corner, with more juice. Best in light northwest winds. There are a few peaks to choose from: lefts and rights. Expect the swell to be at least one to two foot bigger and slightly hollower than Muizenberg Corner.