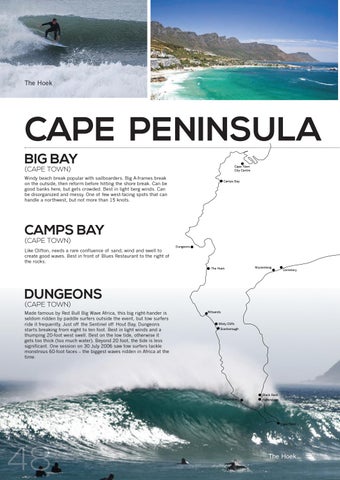 Windy beach break popular with sailboarders. Big A-frames break on the outside, then reform before hitting the shore break. Can be good banks here, but gets crowded. Best in light berg winds. Can be disorganized and messy. One of few west-facing spots that can handle a northwest, but not more than 15 knots.

Like Clifton, needs a rare confluence of sand, wind and swell to create good waves. Best in front of Blues Restaurant to the right of the rocks.

Made famous by Red Bull Big Wave Africa, this big right-hander is seldom ridden by paddle surfers outside the event, but tow surfers ride it frequently. Just off the Sentinel off Hout Bay, Dungeons starts breaking from eight to ten foot. Best in light winds and a thumping 20-foot west swell. Best on the low tide, otherwise it gets too thick (too much water). Beyond 20 foot, the tide is less significant. One session on 30 July 2006 saw tow surfers tackle monstrous 60-foot faces â&amp;#x20AC;&amp;#x201C; the biggest waves ridden in Africa at the time.