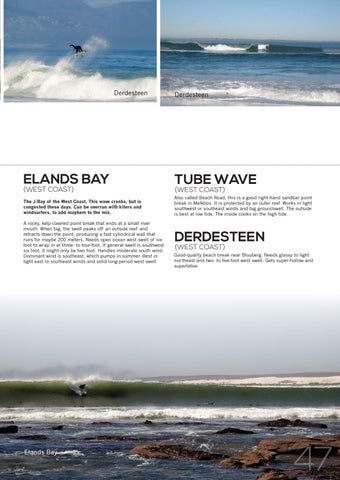 The J-Bay of the West Coast. This wave cranks, but is congested these days. Can be overrun with kiters and windsurfers, to add mayhem to the mix.

Also called Beach Road, this is a good right-hand sandbar point break in Melkbos. It is protected by an outer reef. Works in light southwest or southeast winds and big groundswell. The outside is best at low tide. The inside cooks on the high tide.

A rocky, kelp-covered point break that ends at a small river mouth. When big, the swell peaks off an outside reef and refracts down the point, producing a fast cylindrical wall that runs for maybe 200 meters. Needs open ocean west swell of six foot to wrap in at three- to four-foot. If general swell is southwest six foot, it might only be two foot. Handles moderate south wind. Dominant wind is southeast, which pumps in summer. Best in light east to southeast winds and solid long-period west swell.

Good-quality beach break near Blouberg. Needs glassy to light northeast and two- to five-foot west swell. Gets super-hollow and superlative