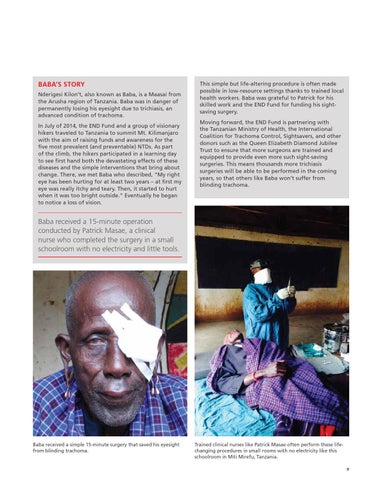 Baba’s Story Nderigesi Kilon’t, also known as Baba, is a Maasai from the Arusha region of Tanzania. Baba was in danger of permanently losing his eyesight due to trichiasis, an advanced condition of trachoma. In July of 2014, the END Fund and a group of visionary hikers traveled to Tanzania to summit Mt. Kilimanjaro with the aim of raising funds and awareness for the five most prevalent (and preventable) NTDs. As part of the climb, the hikers participated in a learning day to see first hand both the devastating effects of these diseases and the simple interventions that bring about change. There, we met Baba who described, “My right eye has been hurting for at least two years – at first my eye was really itchy and teary. Then, it started to hurt when it was too bright outside.” Eventually he began to notice a loss of vision.

This simple but life-altering procedure is often made possible in low-resource settings thanks to trained local health workers. Baba was grateful to Patrick for his skilled work and the END Fund for funding his sightsaving surgery. Moving forward, the END Fund is partnering with the Tanzanian Ministry of Health, the International Coalition for Trachoma Control, Sightsavers, and other donors such as the Queen Elizabeth Diamond Jubilee Trust to ensure that more surgeons are trained and equipped to provide even more such sight-saving surgeries. This means thousands more trichiasis surgeries will be able to be performed in the coming years, so that others like Baba won’t suffer from blinding trachoma.

Baba received a 15-minute operation conducted by Patrick Masae, a clinical nurse who completed the surgery in a small schoolroom with no electricity and little tools.

Baba received a simple 15-minute surgery that saved his eyesight from blinding trachoma.

Trained clinical nurses like Patrick Masae often perform these lifechanging procedures in small rooms with no electricity like this schoolroom in Miti Mirefu, Tanzania. 9

Learn more about how the END Fund and our partners worked in 2014 to combat neglected tropical diseases.