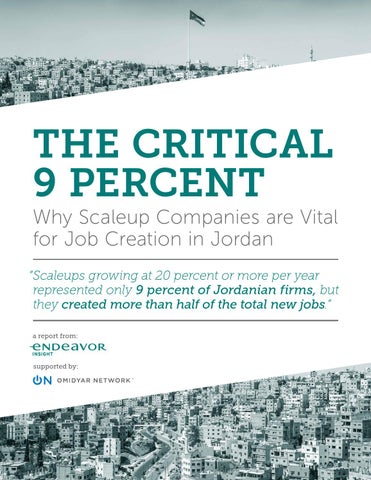 THE CRITICAL 9 PERCENT Why Scaleup Companies are Vital for Job Creation in Jordan “ Scaleups growing at 20 percent or more per year represented only 9 percent of Jordanian firms, but they created more than half of the total new jobs.” a report from:

EXECUTIVE SUMMARY The key findings of this report are as follows: • Jordan needs to create more than 420,000 new jobs for young people by 2020. According to recent estimates, over 200,000 people are unemployed in Jordan. Unemployment is especially high among young people between 15 and 24 years old.1 In addition, Jordan’s labor force is projected to grow by over 337,000 people between 2014 and 2020, due primarily to new young adults entering the job market.2

• Scaleups3 are some of the largest job creators in Jordan and can help to reduce youth unemployment. A 2013 World Bank survey found that only 9 percent of Jordanian companies were scaleups, but these companies created 53 percent of all new jobs generated during the previous three years.4

• Scaleups need access to markets, talent, and funding in order to succeed. According to a survey of more than 1,000 entrepreneurial leaders from around the world, these three factors are the most important contributors to a firm’s growth and success. Contrary to the prevailing wisdom among many policymakers, respondents did not mention other factors such as regulatory frameworks or low taxes.5

1  World Bank World Development Indicators (2014). 2  ILO, Economically Active Population, Estimates and Projections (6th edition, October 2011). 3  For the purposes of this report, a scaleup company is defined as a firm that is more than three years old with an average annual employment growth rate greater than or equal to 20% during the previous three years. 4  World Bank Enterprise Surveys (2013) http://www.enterprisesurveys.org 5  WEF Entrepreneurial Ecosystems Report (2013): Exhibit 3-1

The data in this report is drawn primarily from the most recent World Bank Enterprise Survey (2013) of 573 Jordanian companies. This report analyzes job creation by firm type: startups up to three years old, scaleups greater than three years old that have 20 percent or more average annual employment growth, and other companies greater than three years old that have less than 20 percent average annual employment growth. More information on the methodology underpinning this analysis can be found on page eight. This report was created by Edward Kong and Rhett Morris in the summer and fall of 2014. They wish to thank Mike Goodwin and Matt Lerner for contributing analysis and research to this work.

4 / The Critical 9 Percent: Why Scaleup Companies are Vital for Job Creation in Jordan

Jordan needs to create over 437,000 new jobs for young people by 2020. • 100,000 young Jordanian between the ages of 15 and 24 are unemployed. • Jordan needs to create an additional 337,000 jobs for young people by 2020. The economic turmoil of the last six years has created a global job crisis. The International Labor Organization (ILO) estimates that the world’s economies need hundreds of millions of new jobs to create opportunities for two groups: those currently unemployed and the growing population of young people entering the workforce during the next decade.6 This jobs crisis is apparent almost everywhere in the world, and it affects countries at every level of development. In Jordan, the need for job creation is especially crucial for young adults. According to national estimates, the unemployment rate for Jordanians between the ages of 15 and 24 is 31 percent, which means that over 100,000 young Jordanians in the labor force are out of work.7 Economists note that unemployment among young adults has an adverse impact on skill development and future earnings for years to come. “The global economic crisis has hit us all. In Jordan, our young people - the vast majority of the population - suffer unacceptable levels of unemployment,” according to King Abdullah II. “We have lost markets due to the crisis in Syria; and the energy crisis cost our treasury heavily. But Jordan’s challenges have only made us more determined ‑ and we are making the tough decisions for a safe and prosperous future.”8 As more young people enter the labor force, demand for jobs will continue to grow. Jordan’s labor force is projected to increase by over 337,000 workers between 2014 and 2020, due primarily to new young adults entering the job market.9 When combined with the more than 100,000 15–24 year olds who are currently unemployed, this suggests that 437,000 jobs need to be created for young Jordanians who will be looking for work in the next six years.

The Critical 9 Percent: Why Scaleup Companies are Vital for Job Creation in Jordan / 5

Scaleups are some of the most important job creators in Jordan and can help to reduce unemployment. • Scaleups represent 9 percent of Jordanian firms, but create 53 percent of new jobs. • Jobs created by scaleups are durable and of high quality.

Although much attention has been given to startups and microenterprises, supporting existing entrepreneurs who can scale their businesses is crucial to meeting Jordan’s job needs. Scaleups create more jobs than other types of firms. The World Bank Enterprise Survey, which was last conducted in Jordan in 2013, provides comprehensive company-level data about firms in emerging economies.10 The Enterprise Survey demonstrates just how vital scaleups were to the creation of new jobs. Scaleups growing at 20 percent or more per year represented only 9 percent of Jordanian firms, but they created more than half of the total new jobs generated during the previous three years.11 A significant body of research on North American firms confirms that scaleups are the drivers of job creation, demonstrating that a small percentage of fast-growing companies account for a disproportionate percentage of job growth. For example, a 2008 study from the U.S. Small Business Administration found that the fastest growing 2-3 percent of firms account for almost all U.S. private sector job growth.12

6 / The Critical 9 Percent: Why Scaleup Companies are Vital for Job Creation in Jordan

Scaleups are also durable. The same study found that only 3 percent of fast-growing firms failed in the four years after they experienced high-growth.13 A separate study in the journal of Small Business Economics likewise found that scaleups create long-term jobs. The authors examined Canadian firms with the fastest employment growth from 1985 to 1999 and found these firms to be resistant to job losses during periods of recession.14 These statistics may actually underestimate the full job creation impact of scaleups, which can strengthen value chains and generate positive spillovers for other firms. Research has shown that successful innovation-driven enterprises, which have similar growth characteristics to scaleups, create about five auxiliary jobs for each direct job.15 Finally, scaleups promote their employees’ professional development. As these companies grow and add new employees, workers who started in entry-level positions often move into middle management, developing project management and governance skills along the way. These skills add value to the company and allow workers to increase their earnings.

The Critical 9 Percent: Why Scaleup Companies are Vital for Job Creation in Jordan / 7

Scaleups need access to markets, talent, and funding in order to succeed.

• A group of over 1,000 leading entrepreneurs identified access to talent, markets, and funding as the most important factors that helped their companies grow

The World Economic Forum, in partnership with Stanford University and Endeavor Insight, recently conducted a survey of more than 1,000 leaders at entrepreneurial companies around the world in order to identify factors that helped their companies to grow.16 Contrary to the prevailing wisdom among many policymakers, these respondents rarely mentioned regulatory frameworks and taxes, lack of coordination with major universities, and low-quality entrepreneurship education as barriers to the growth of their companies. These leaders instead highlighted the importance of the following three factors: • Human Capital (mentioned by 62 percent of entrepreneurs surveyed): This includes the various sources of talent available to entrepreneurs as they staff their companies. Management and technical talent were the most important resources cited in our survey. • Accessible Markets (60 percent): This includes public- and private-sector customers in domestic and foreign markets. Respondents frequently cited domestic, private-sector customers as most critical to their growth. • Funding and Finance (59 percent): This includes all types of debt and equity capital available to entrepreneurs. Various forms of equity capital, such as seed investments by family and friends, angel capital and venture capital, were rated most highly by respondents.

8 / The Critical 9 Percent: Why Scaleup Companies are Vital for Job Creation in Jordan

Methodology The World Bank Enterprise Survey is a representative sample of firms in an economy’s private sector. The World Bank typically interviews 150 firms in small economies, 360 in medium-size ones, and 1,2001,800 in larger economies. The sample is constructed using a stratified random sample based on firm size, business sector, and geographic region within a country. According to the World Bank, “Enterprise Surveys tend to oversample large firms since larger firms tend to be engines of job creation.”17 The analysis contained in this report is based on the following three survey questions: • “In what year did this establishment begin operations in this country?” • “At the end of fiscal year [insert last complete fiscal year], how many permanent, full-time employees did this establishment employ?” • “Three fiscal years ago, in the year [insert three complete fiscal years ago], how many permanent, full-time employees did this establishment employ?” Using firms’ responses to these questions, we construct an employment compound annual growth rate (CAGR). We summarize job figures using sampling weights. Therefore, findings should be considered valid at the economy level.

The Critical 9 Percent: Why Scaleup Companies are Vital for Job Creation in Jordan / 9

About Omidyar Network Omidyar Network is a philanthropic investment firm dedicated to harnessing the power of markets to create opportunity for people to improve their lives. Established in 2004 by eBay founder Pierre Omidyar and his wife Pam, the organization invests in and helps scale innovative organizations to catalyze economic and social change. As of June 2013, Omidyar Network has committed more than $709 million to for-profit companies and nonprofit organizations that foster economic advancement and encourage individual participation across multiple initiatives, including entrepreneurship, financial inclusion, property rights, government transparency, consumer Internet and mobile. To learn more, visit www.omidyar.com

Why Scaleup Companies are Vital for Job Creation in Jordan 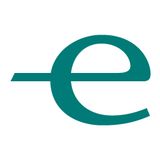