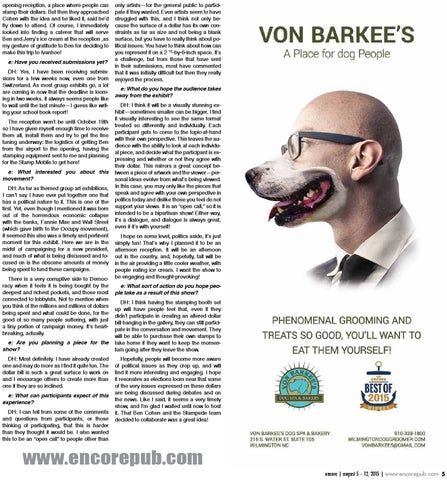 opening reception, a place where people can stamp their dollars. But then they approached Cohen with the idea and he liked it, said he’d fly down to attend. Of course, I immediately looked into finding a caterer that will serve Ben and Jerry’s ice cream at the reception ,as my gesture of gratitude to Ben for deciding to make this trip to Ivanhoe! e: Have you received submissions yet? DH: Yes, I have been receiving submissions for a few weeks now, even one from Switzerland. As most group exhibits go, a lot are coming in now that the deadline is looming in two weeks. It always seems people like to wait until the last minute—I guess like writing your school book report! The reception won’t be until October 18th so I have given myself enough time to receive them all, install them and try to get the fine tuning underway: the logistics of getting Ben from the airport to the opening, having the stamping equipment sent to me and planning for the Stamp Mobile to get here! e: What interested you about this movement? DH: As far as themed group art exhibitions, I can’t say I have ever put together one that has a political nature to it. This is one of the first. Yet, even though I mentioned it was born out of the horrendous economic collapse with the banks, Fannie Mae and Wall Street (which gave birth to the Occupy movement), it seemed this also was a timely and pertinent moment for this exhibit. Here we are in the midst of campaigning for a new president, and much of what is being discussed and focused on is the obscene amounts of money being spent to fund these campaigns. There is a very corruptive side to Democracy when it feels it is being bought by the deepest and richest pockets, and those most connected to lobbyists. Not to mention when you think of the millions and millions of dollars being spent and what could be done, for the good of so many people suffering, with just a tiny portion of campaign money. It’s heartbreaking, actually. e: Are you planning a piece for the show? DH: Most definitely. I have already created one and may do more as I find it quite fun. The dollar bill is such a great surface to work on and I encourage others to create more than one if they are so inclined. e: What can participants expect of this experience? DH: I can tell from some of the comments and questions from participants, or those thinking of participating, that this is harder than they thought it would be. I also wanted this to be an “open call” to people other than

only artists—for the general public to participate if they wanted. Even artists seem to have struggled with this, and I think not only because the surface of a dollar has its own constraints as far as size and not being a blank surface, but you have to really think about political issues. You have to think about how can you represent it on a 2 1/2-by-6-inch space. It’s a challenge, but from those that have sent in their submissions, most have commented that it was initially difficult but then they really enjoyed the process. e: What do you hope the audience takes away from the exhibit? DH: I think it will be a visually stunning exhibit—sometimes smaller can be bigger. I find it visually interesting to see the same format treated so differently and individually. Each participant gets to come to the topic-at-hand with their own perspective. This leaves the audience with the ability to look at each individual piece, and decide what the participant is expressing and whether or not they agree with their dollar. This mirrors a great concept between a piece of artwork and the viewer—personal ideas evolve from what’s being viewed. In this case, you may only like the pieces that speak and agree with your own perspective in politics today and dislike those you feel do not support your views. It is an “open call,” so it is intended to be a bipartisan show! Either way, it’s a dialogue, and dialogue is always great, even if it’s with yourself! I hope on some level, politics aside, it’s just simply fun! That’s why I planned it to be an afternoon reception. It will be an afternoon out in the country, and, hopefully, fall will be in the air providing a little cooler weather, with people eating ice cream. I want the show to be engaging and thought-provoking! e: What sort of action do you hope people take as a result of this show? DH: I think having the stamping booth set up will have people feel that, even if they didn’t participate in creating an altered dollar bill hanging in the gallery, they can still participate in the conversation and movement. They will be able to purchase their own stamps to take home if they want to keep the momentum going after they leave the show. Hopefully, people will become more aware of political issues as they crop up, and will find it more interesting and engaging. I hope it resonates as elections loom near that some of the very issues expressed on these dollars are being discussed during debates and on the news. Like I said, it seems a very timely show, and I’m glad I waited until now to host it. That Ben Cohen and the Stampede team decided to collaborate was a great idea! 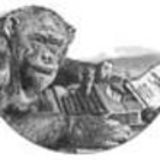