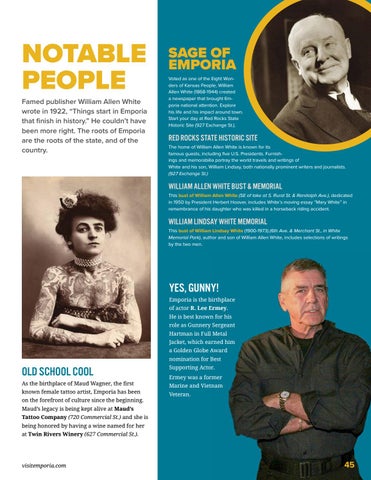 Famed publisher William Allen White wrote in 1922, “Things start in Emporia that finish in history.” He couldn’t have been more right. The roots of Emporia are the roots of the state, and of the country.

Voted as one of the Eight Wonders of Kansas People, William Allen White (1868-1944) created a newspaper that brought Emporia national attention. Explore his life and his impact around town. Start your day at Red Rocks State Historic Site (927 Exchange St.).

RED ROCKS STATE HISTORIC SITE The home of William Allen White is known for its famous guests, including five U.S. Presidents. Furnishings and memorabilia portray the world travels and writings of White and his son, William Lindsay, both nationally prominent writers and journalists. (927 Exchange St.)

YES, GUNNY! Emporia is the birthplace of actor R. Lee Ermey. He is best known for his role as Gunnery Sergeant Hartman in Full Metal Jacket, which earned him a Golden Globe Award nomination for Best

As the birthplace of Maud Wagner, the first

known female tattoo artist, Emporia has been on the forefront of culture since the beginning.

Ermey was a former Veteran.

Maud’s legacy is being kept alive at Maud’s Tattoo Company (720 Commercial St.) and she is being honored by having a wine named for her at Twin Rivers Winery (627 Commercial St.). 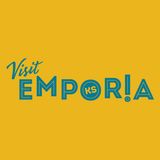