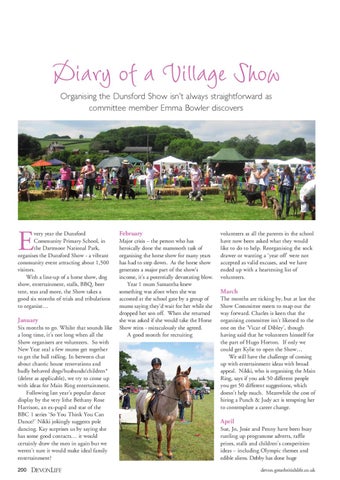 very year the Dunsford Community Primary School, in the Dartmoor National Park, organises the Dunsford Show - a vibrant community event attracting about 1,500 visitors. With a line-up of a horse show, dog show, entertainment, stalls, BBQ, beer tent, teas and more, the Show takes a good six months of trials and tribulations to organise…

January Six months to go. Whilst that sounds like a long time, it’s not long when all the Show organisers are volunteers. So with New Year zeal a few mums get together to get the ball rolling. In between chat about chaotic house renovations and badly behaved dogs/husbands/children* (delete as applicable), we try to come up with ideas for Main Ring entertainment. Following last year’s popular dance display by the very lithe Bethany Rose Harrison, an ex-pupil and star of the BBC 1 series ‘So You Think You Can Dance?’ Nikki jokingly suggests pole dancing. Kay surprises us by saying she has some good contacts… it would certainly draw the men in again but we weren’t sure it would make ideal family entertainment? 200

February Major crisis – the person who has heroically done the mammoth task of organising the horse show for many years has had to step down. As the horse show generates a major part of the show’s income, it’s a potentially devastating blow. Year 1 mum Samantha knew something was afoot when she was accosted at the school gate by a group of mums saying they’d wait for her while she dropped her son off. When she returned she was asked if she would take the Horse Show reins - miraculously she agreed. A good month for recruiting

volunteers as all the parents in the school have now been asked what they would like to do to help. Reorganising the sock drawer or wanting a ‘year off’ were not accepted as valid excuses, and we have ended up with a heartening list of volunteers.

March The months are ticking by, but at last the Show Committee meets to map out the way forward. Charles is keen that the organising committee isn’t likened to the one on the ‘Vicar of Dibley’, though having said that he volunteers himself for the part of Hugo Horton. If only we could get Kylie to open the Show… We still have the challenge of coming up with entertainment ideas with broad appeal. Nikki, who is organising the Main Ring, says if you ask 50 different people you get 50 different suggestions, which doesn’t help much. Meanwhile the cost of hiring a Punch & Judy act is tempting her to contemplate a career change.

amounts of admin and thankfully booked toilets in spite of the Olympic-induced shortage, and the new website is up and running. Another Horse Show crisis. The loss of our previous horse show organiser means we have no jumps and a horse show without jumps is a bit like Punch without Judy. After frantically asking around, Sam asks Joyce Newbery at the Oaklands Riding School in Exeter and she has agreed to lend her enough jumps for a ‘clear round’ class.

ponies and a dynamic cheerleader display by the Exeter Starlites. Having been set the task of taking a Committee photo for Devon Life Sue suggests we do a ‘cup cake Calendar Girls’ style shot, fortunately the weather is still too cold and we end up fully clothed but with only one dog facing the camera! The show jumping classes are looking increasingly unlikely; although we have enough jumps for a ‘clear round’ we still don’t have any show jumps, so an urgent appeal goes out to parents.

Leanne, who is organising the Dog Show, says she’s opted for a ‘Most Royal Dog’ class as her suggestion for a ‘Dog Who Most Looks Like The Queen’ class was met with dubious looks. She’s also decided to change the ‘Dog With The Best Little Trick’ class to the more topical ‘Best Olympic Dog’.

Karen, Queen of the Spreadsheets, is busy allocating all the jobs that need to be done on The Day – no mean feat particularly as there are more jobs than parents. Fortunately friends and relatives rarely notice that their ‘come down to Devon for the weekend’ invitation just happens to be the weekend of the Show... until they get here. Show Day is rapidly approaching and Rachel, who’s helping Sam organise the horse show, hears from the Moretonhampstead Riding Club – they will lend us their show jumps! With this last piece in place we’re ready to stage the best Show ever, so please come and join us!

July Saturday 7th – The Big Day. For details of the 38 horse show classes, 13 dog show classes and 8 children’s competitions plus all the latest news see: dunsfordshow.co.uk 2