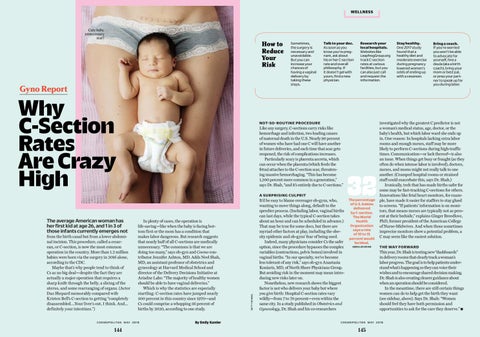 How to Reduce Your Risk

Why C-Section Rates Are Crazy High

Sometimes, the surgery is necessary and unavoidable. But you can increase your chances of having a vaginal delivery by taking these steps.

Talk to your doc. As soon as you know you’re pregnant, ask about his or her C-section rate and overall philosophy. If it doesn’t gel with yours, find a new physician.

Like any surgery, C-sections carry risks like hemorrhage and infection, two leading causes of maternal death in the U.S. Nearly 90 percent of women who have had one C will have another in future deliveries, and each time that scar gets reopened, the risk of complications increases. Particularly scary is placenta accreta, which can occur when the placenta (which feeds the fetus) attaches to the C-section scar, threatening massive hemorrhaging. “This has become 1,200 percent more common in a generation,” says Dr. Shah, “and it’s entirely due to C-sections.”

from the birth canal but from a lower abdominal incision. This procedure, called a cesarean, or C-section, is now the most common operation in the country. More than 1.2 million babies were born via the surgery in 2016 alone, according to the CDC. Maybe that’s why people tend to think of Cs as no big deal—despite the fact they are actually a major operation that requires a sharp knife through the belly, a slicing of the uterus, and some rearranging of organs. (Actor Dax Shepard memorably compared wife Kristen Bell’s C-section to getting “completely ­disassembled....Your liver’s out, I think. And... definitely your intestines.”)

In plenty of cases, the operation is life-saving—like when the baby is facing bottom first or the mom has a condition that makes labor dangerous. But research suggests that nearly half of all C-sections are medically unnecessary. “The consensus is that we are doing too many,” says ob-gyn and Cosmo contributor Jennifer Ashton, MD. Adds Neel Shah, MD, an assistant professor of obstetrics and gynecology at Harvard Medical School and director of the Delivery Decisions Initiative at Ariadne Labs: “The majority of healthy women should be able to have vaginal deliveries.” Which is why the statistics are especially startling: C-section rates have jumped nearly 500 percent in this country since 1970—and Cs could comprise a whopping 56 percent of births by 2020, according to one study.

The average American woman has her first kid at age 26, and 1 in 3 of those infants currently emerges not

Research your local hospitals. Websites like LeapfrogGroup.org track C-section rates at various facilities, but you can also just call and request the information.

It’d be easy to blame overeager ob-gyns, who, wanting to move things along, default to the speedier process. (Including labor, vaginal births can last days, while the typical C-section takes about an hour and can be scheduled in advance.) That may be true for some docs, but there are myriad other factors at play, including the obesity epidemic and ob-gyns’ fear of being sued. Indeed, many physicians consider Cs the safer option, since the procedure bypasses the complex variables (contractions, pelvic bones) involved in vaginal births. “In our specialty, we’ve become less tolerant of any risk,” says ob-gyn Anastasia Koniaris, MD, of North Shore Physicians Group. But avoiding risk in the moment may mean introducing new risks later on. Nonetheless, new research shows the biggest factor is not who delivers your baby but where you give birth: Hospital C-section rates vary wildly—from 7 to 70 percent—even within the same city. In a study published in Obstetrics and Gynecology, Dr. Shah and his co-researchers

32 The percentage of U.S. babies delivered by C-section. The World Health Organization says a rate of 10 to 15 percent would be ideal. SOURCES: CDC AND WHO

Stay healthy. One 2017 study found that a healthy diet and moderate exercise during pregnancy lowered women’s odds of ending up with a cesarean.

Bring a coach. If you’re worried you won’t be able to advocate for yourself, hire a doula (aka a birth coach), bring your mom or best pal, or prep your partner to speak up for you during labor.

investigated why the greatest C predictor is not a woman’s medical status, age, doctor, or the baby’s health, but which labor ward she ends up in. One reason: In hospitals lacking extra labor rooms and enough nurses, staff may be more likely to perform C-sections during high-traffic times. Communication—or lack thereof—is also an issue. When things get busy or fraught (as they often do when intense labor is involved), doctors, nurses, and moms might not really talk to one another. (Cramped hospital rooms or strained staff could exacerbate this, says Dr. Shah.) Ironically, tech that has made births safer for some may be fast-tracking C-sections for others. Innovations like fetal heart monitors, for example, have made it easier for staffers to stay glued to screens. “If patients’ information is on monitors, that means nurses are typically not as present at their bedside,” explains Ginger Breedlove, PhD, former president of the American College of Nurse-Midwives. And when those sometimes imprecise monitors show a potential problem, a C may seem like the easiest solution. THE WAY FORWARD

This year, Dr. Shah is testing new “dashboards” in delivery rooms that clearly track a woman’s labor progress. The goal is to help patients understand what’s happening so they can voice their wishes and to encourage shared decision making. Dr. Shah is also creating clearer guidance about when an operation should be considered. In the meantime, there are still certain things women can do to help get the birth they want (see sidebar, above). Says Dr. Shah: “Women should feel they have both permission and opportunities to ask for the care they deserve.” ■