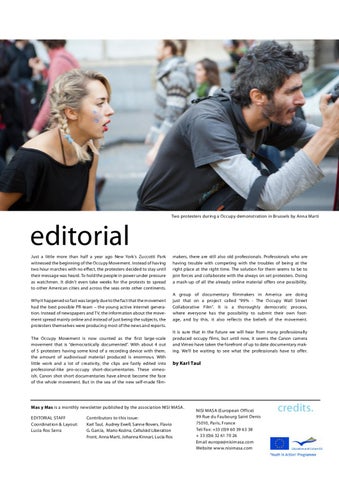 editorial Just a little more than half a year ago New York’s Zuccotti Park witnessed the beginning of the Occupy Movement. Instead of having two hour marches with no effect, the protesters decided to stay until their message was heard. To hold the people in power under pressure as watchmen. It didn’t even take weeks for the protests to spread to other American cities and across the seas onto other continents. Why it happened so fast was largely due to the fact that the movement had the best possible PR-team – the young active internet generation. Instead of newspapers and TV, the information about the movement spread mainly online and instead of just being the subjects, the protesters themselves were producing most of the news and reports. The Occupy Movement is now counted as the first large-scale movement that is “democratically documented”. With about 4 out of 5 protesters having some kind of a recording device with them, the amount of audiovisual material produced is enormous. With little work and a lot of creativity, the clips are fastly edited into professional-like pro-occupy short-documentaries. These vimeoish, Canon shot short documentaries have almost become the face of the whole movement. But in the sea of the new self-made film-

Two protesters during a Occupy demonstration in Brussels by Anna Marti

makers, there are still also old professionals. Professionals who are having trouble with competing with the troubles of being at the right place at the right time. The solution for them seems to be to join forces and collaborate with the always on set protesters. Doing a mash-up of all the already online material offers one possibility. A group of documentary filmmakers in America are doing just that on a project called “99% - The Occupy Wall Street Collaborative Film”. It is a thoroughly democratic process, where everyone has the possibility to submit their own footage, and by this, it also reflects the beliefs of the movement. It is sure that in the future we will hear from many professionally produced occupy films, but until now, it seems the Canon camera and Vimeo have taken the forefront of up to date documentary making. We’ll be waiting to see what the professionals have to offer. 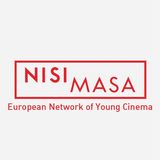