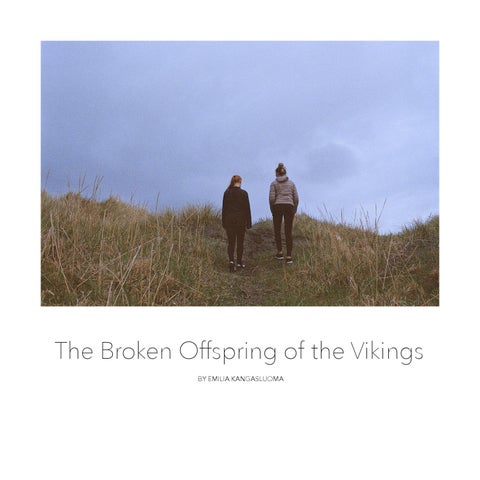 The Broken Offspring of the Vikings BY EMILIA KANGASLUOMA

Sudden and unexplained deaths of the young have always haunted the people in the Faroe Islands. Boys and girls in their early twenties have passed away sleeping or dancing. Their hearts have simply stopped beating. The reason for the mysterious deaths was found in the late 1990s. It was a rare inherited genetical disorder called carnitine transporter deficiency, CTD, which is a gene mutation. People with CTD canÂ´t absorb fat in their body cells and therefore hearts canÂ´t get the

energy they need. So hearts fail. There are no elderly people with the deathliest mutation of CTD because they have all simply died young. Since 2009 the Faroese have had a possibility to test their carnitine levels for the gene mutation. Around 31 000 people have had the test so far. It is known that at least some 150 people in the Faroe Islands have the deathly mutation of CTD. From a total of 50 000 inhabitants it makes one in every 300. CTD is 1000 times more

common in the Faroe Islands than anywhere else in the world. As many as one in eight are carriers of the gene. More people are found monthly. In the remote islands, thousands of kilometres from the continent, the gene pool has naturally been very limited. Everyone is somehow related and most people have their family trees tracked down all the way to the vikings. The deathly gene has had a change to evolve over generations. The broken offspring of the vikings.

Harald Egholm, 9 Sandur, Sandoy Harald dreams of being a footballer but while growing up, he also plays badminton, handball and volleyball. Harald was three when he was diagnosed with CTD. The news came just after his aunt died at the age of 25. The cause was CTD. Also another aunt has CTD. Before the diagnose Harald was a tired child. When in kindergarden he never wanted to walk anywhere. Today there is a medicine for CTD. It contains carnitine and comes in pills or liquid form. Dosage of drug depends on many things such as the age and the weight of the patient. Harald takes the medicine four times a day and he is full of energy. Harald lives in the island of Sandoy. His mother and grandparents are also from the same village, Sandur, where he lives now. CTD is more common in Sandoy than other islands in the Faroes. Nobody knows why, but the mutation of the gene is also the most dangerous there.

Ninna Karlina Á Høvdanum, 16 Klaksvík, Borðoy Siblings of Ninna Karlina´s grandfather died young and unexplained. The cause was only found out few years back: CTD. Ninna Karlina used to feel tired. She just wanted to sleep constantly. She also felt really hungry. Her blood was tested and she had a mild case of CTD which means she is also a carrier of it. Because of her family history, she is in the risk zone and has to eat the medicine. Ninna Karlina now takes carnitine pills three times a day and three pills at a time.With the right medication CTD patients can live a normal life.

Sigmar Ovason Nysted, 16 and Esmund Løwe Sørensen, 16 Haraldssund, Borðoy Sigmar is the boy on the left. He owns one sheep and wants to become a fish farmer like so many other in the Faroe Islands. His family is from a small island of Fugloy where only 20 people live. Sigmar knows CTD runs in the family but he doesn´t feel the need to be tested. He just doesn´t think it is something for him since he doesn`t feel sick.

There is a strong believe that the diet plays an important role in CTD. The people in the Faroe Islands have always eaten a lot of meat, especially lamb meat. Since lamb contains naturally a lot of carnitine, the people with CTD got what they were missing from the meat. Nowadays the diet is more versatile: supermarkets sell fruits, vegetables and other products that never before were available in the islands. Eating habits have changed. Lamb is no longer the only thing people eat. The diet often changes dramatically when young people move abroad to study. Many of the deaths of the young have happened when people have moved to Denmark and started eating differently. Today, the patients with CTD are advised to consume a lot of meat.

Marin Jakobsen, 14 Tórshavn, Streymoy Marin´s mother is a carrier of CTD but luckily Marin doesn´t carry the gene. But her cousin has CTD. The cousin has eaten the medicine since he was five. Now he is eleven and he is tired of being on medication all the time. The patients with CTD have to take the medicine for the rest of their lives. Patients are also monitored regularly by the doctors: their EKGs and carnitine levels are checked almost annually. Marin wants to move to Denmark to study and then come back to the Faroe Islands. She has been together with her boyfriend Petur from Viðoy for two months.

Brandur Dalsgarð, 17 and Brandur Hetinsson, 19 Nolsoy Brandur, on the right, is a carrier of CTD together with his siblings. He doesn´t really think about it. Especially he doesn´t think if his future girlfriend will have it. Still, if he would get children with a girl who also carries the gene, 50 percent of the children would have CTD. Even if his girlfriend was healthy, his children would be carriers of the CTD gene. The only way to make sure that the descendants of the Faroese were not infected with the CTD gene, would be to find a spouse outside Faroe Islands.

Mia Helmsdal Clothier, 15 Tórshavn, Streymoy Mia´s blood test for CTD was made five years ago. Her mother was very worried when the test was taken. There was panic about CTD and the whole nation was talking about it. Luckily Mia was healthy like the rest of her family. They don´t carry the CTD gene. But Mia knows people who have it.

Rannvá B. Sólsker, 14 Sandur, Sandoy Rannvá´s little sister is a carrier of CTD. She has to take a lot of drugs. Teachers at kindergartens and schools have a big responsibility to remind the kids with CTD to take their carnitine. Rannvá and all the other young people learn about CTD at school. Almost everybody has a relative with CTD in the island of Sandoy. In fact, almost everybody is related to each other in the island of Sandoy.

Anna Elisabeth Krog Hentze, 9 and Armgard Krog Hentze, 5 Sandur, Sandoy When many young people died in 2009 in the island of Sandoy, all the islanders were offered to get tested for CTD. Anna Elisabeth was a tiny three-yearold girl who was often sick. She had the most dangerous mutation of CTD. Armgard was tested right after her birth. She also had the same CTD gene. The girls take the medicine four times a day. If they forget it, they get tired and sleepy. For them, it can be fatale not to take the medicine. Still, having CTD feels natural for them since they have always had it. The Broken Offspring of the Vikings

Sudden and unexplained deaths of the young have always haunted the people of the Faroe Islands. Boys and girls in their early twenties have...

The Broken Offspring of the Vikings

Sudden and unexplained deaths of the young have always haunted the people of the Faroe Islands. Boys and girls in their early twenties have...