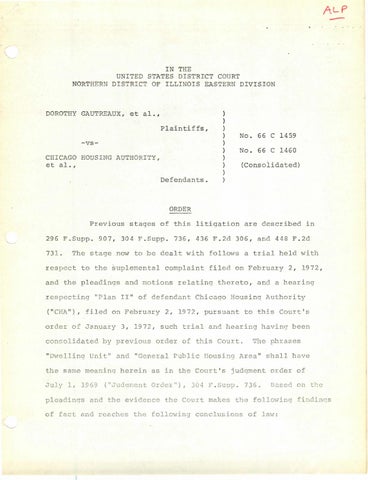 FINDINGS OF FACT A.

Pursuant to previous orders of this Court

a duty to use its best efforts to increase the supply of Dwelling Units in conformity with the Judgment Order as rapidly as possible .. B.

To that end, and pursuant to orders of this Court, on

March 5, 1971 CHA submitted to the defendant members of the City Council (&quot;Council&quot;) of the defendant City of Chicago (&quot;City&quot;), and to the Chicaqo Plan Commis sion, an aqency of the City, proposed sites for the provision of not fewer than 1500 Dwellina Units. C.

Acquisition of such sites or alt erna tive sites by CHA

is nec e ssary to enab le CHA to inc rease the supply of Dwellina Units in conformity with the Judqment Order as rapidly as possible. D.

Illinois Revised Statutes, CHA may not acquir e real proper ty unt jl the acquisition thereof has been appr oved by the Council: &quot;If the ar ea of operation of a .housina authority include s a city, villaae br incorporated town hav i nq a population in excess o f 500,000 路as determined by the last precedinq Federal census, no real proper t y or i nterest in real proper t y shall be acqui r ed in such municipal ity by the housina autho rity u ntil such ti me as the housinq authority has adv i sed the qovernina body of such municipa l ity of the description of the real property, or interest therein, proposed to b e acq uired, and th e governing body of the the munic i pali ty has approved the acquisition thereof by the housinq authority . &quot; E.

i ts aqencies) and the Council approved the acqu isition

of certain real property by CHA which is presently sufficient to provide fewer than 200 Dwelling Units in conformity with the Judgment Order. F.

conducted hearings with respect to, and neither the City nor the Council has approved the acquisition of, any real property by CHA for the purpose of providing Dwelling Units in conformity with th e Judgment Order. G.

Such failure to conduct hearing s and to approve any

such acq ui s ition si nce July 1, 1971 is u n justified, there having been no showing of superven ing necess ity therefor, or indeed any showing of any ne c e ssity or reason at all, and the evidence havi ng- s hown that. many of the si t es refer r ed to in paragraph B above

are suitab le for the provision of Dwe lling Un its. H.

Such failure to conduc t hearings and approve acqui-

sition has the effect of preventing CHA from providi ng additional Dwelling Units l n confo r mity with the Judgme nt Order, thereby denying relief to the plain t iffs to wh ich th ey are entitled and frustr ating an d preventi ng this Court from assuring t hat such relief is provi ded . CONCLUSIONS OF LAW A.

Under the eviden ce in this case , the effect of the

failures of the City and Council since July 1 , 1971 to any acquisition of real property by CHA for the purpose of -3-

providing additional Dwelling Units in conformity with the Judgment Order has been and continues to be to thwart the correction of federal constitutional wrongs.

Such failures may not be per-

mitted to thwart such correction.

tion to seek means of disestablishing state-imposed segregation must be shared by all agencies or agents of the state.

Under th e evidence in this case, taken together

and viewed in their historical context, such failures of the City and the Council violate the rights of the plaintiffs and the class they represent under the equal protection clause of the Fourteenth Amendment to the United States Constitution.

Unde r the evidence in this case, the effe ct of

th e operation of the f o rego ing provision of Section 9 1 Chapter 67-l/ 2, Illinois Revised S tatutes , has been and is to deny plaintiffs t he relief to which they are entit l ed under th e Judgment Order and to prevent this Court from assuring that a full remedy is provided for the violations of federal constitutional ri ghts which this Court&#39;s memorandum opinion of February 10, 1969 found to have occurred . D.

Under the evidence in this case , the Court has the

notwithstanding the foregoing provision of Section 9, 67-l/2, Illinois Revised Statutes, and notwithstanding such failures of the City and the Council.

and for jury tria l s be and the same hereby are denied . 2.

Unti l the further order of this Court the follow-

the governing body of such municipality of the description of the real property, or interest ther e in, proposed to b e acquired, and the governing body of the municipality has approved the acquisition thereof by the housing authority.&quot; shall not be applicable to CHA&#39;s actions, including without limitation the acquisition of real property in the City of Chicago, taken for the pur pose of providing Dwelling Units. 3A.

Immediately upon such fi l ing and servi ce pursuant

necessary or appropriate to acquire such sites and ing Units thereon, including without limitation,

tion and submission of plans and proposals, including a so-called Development Plan, relating thereto to HUD,

such sites, regardless of any action taken or not taken by the Council with resp e ct thereto, upon HUD&#39;s approval of such Development Plan;jfc)

the provision of Dwelling Units thereon as

Within 15 days from the date hereof the City shall

deliver to CHA a list of all the vacant, residen tially zoned parcels of land in the General Public Housing Area of the City of which i t has knowledge. An

file with the Court and serve upon counsel for HU D, the City and the plai ntiffs , a list of such sites as will in the judgment of CHA, whe n adde d to the sites app rov ed by t he Council in J une , 1971, and the si tes ref e rred to in paragraph 3C hereo f , b e sufficient for t h e p r o v i sion of an agg r e gat e of 1500 Dwelling Units in confo rmity with the Jud gmen t Orde r. 4C.

vice CHA sha ll r ece ive, conside r and make availab l e at i ts offi c es to t he public for inspection , al l comme nts from any source re l ati ng to s uch site s as are submi tted to i t in wr i t i ng . 4D .

Immediately upon such filing and service pursuant

to paragraph 4D hereof, CHA shall begin all steps and procedures necessary or appropriate to acquire such sites and provide Dwelling Units thereon, including without limitation,

tion and submission of plans and proposals, including a so-called Development Plan, relating thereto to HUD,

the acqui si tion of

such sites, regardless of any action taken or not taken by the Council with respect thereto, upon HUD&#39;s approval of such Developp romptly as ment Plan, and (c) the provision of Dwelling Unit s thereon as

The Court retain s jurisdiction over this matter

certified in accordance with Rule 54(b) of the Federal Rules of Civil Procedure, (a)

That the Court has directed the entry of a final judgment respecting a claim for relief under the supplemental complaint; and

That the Court has determined that there no just re a son for d e lay .

·{No te: Attached is a map indicating the areas of the City for which hearings have been held.) 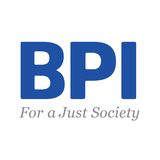