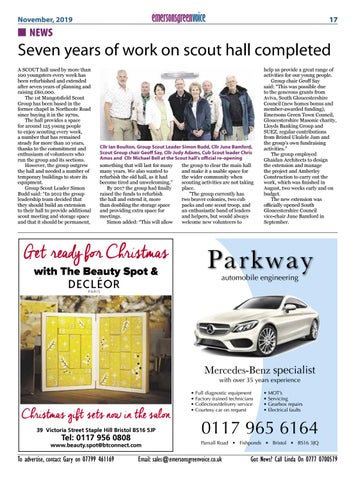 Seven years of work on scout hall completed A SCOUT hall used by more than 100 youngsters every week has been refurbished and extended after seven years of planning and raising £60,000. The 1st Mangotsfield Scout Group has been based in the former chapel in Northcote Road since buying it in the 1970s. The hall provides a space for around 125 young people to enjoy scouting every week, a number that has remained steady for more than 10 years, thanks to the commitment and enthusiasm of volunteers who run the group and its sections. However, the group outgrew the hall and needed a number of temporary buildings to store its equipment. Group Scout Leader Simon Budd said: “In 2012 the group leadership team decided that they should build an extension to their hall to provide additional scout meeting and storage space and that it should be permanent,

Cllr Ian Boulton, Group Scout Leader Simon Budd, Cllr June Bamford, Scout Group chair Geoff Say, Cllr Judy Adams, Cub Scout leader Chris Amos and Cllr Michael Bell at the Scout hall's official re-opening something that will last for many the group to clear the main hall many years. We also wanted to and make it a usable space for refurbish the old hall, as it had the wider community when become tired and unwelcoming.” scouting activities are not taking By 2017 the group had finally place. raised the funds to refurbish "The group currently has the hall and extend it, more two beaver colonies, two cub than doubling the storage space packs and one scout troop, and and providing extra space for an enthusiastic band of leaders meetings. and helpers, but would always Simon added: “This will allow welcome new volunteers to

Get ready for Christmas with The Beauty Spot &

help us provide a great range of activities for our young people. Group chair Geoff Say said: “This was possible due to the generous grants from Aviva, South Gloucestershire Council (new homes bonus and member-awarded funding), Emersons Green Town Council, Gloucestershire Masonic charity, Lloyds Banking Group and SUEZ, regular contributions from Bristol Ukulele Jam and the group's own fundraising activities.” The group employed Ghaidan Architects to design the extension and manage the project and Amberley Construction to carry out the work, which was finished in August, two weeks early and on budget. The new extension was officially opened South Gloucestershire Council vice-chair June Bamford in September.

Mercedes-Benz specialist with over 35 years experience 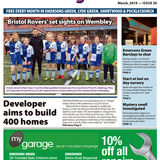 Local newspaper packed with news, views and advertising for the residents and businesses of Emersons Green, Lyde Green and Pucklechurch

Local newspaper packed with news, views and advertising for the residents and businesses of Emersons Green, Lyde Green and Pucklechurch