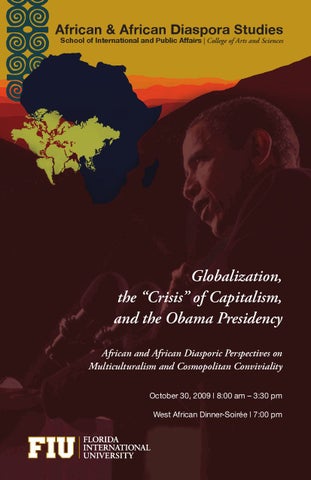 School of International and Public Affairs | College of Arts and Sciences

Globalization, the “Crisis” of Capitalism, and the Obama Presidency African and African Diasporic Perspectives on Multiculturalism and Cosmopolitan Conviviality October 30, 2009 | 8:00 am – 3:30 pm West African Dinner-Soirée | 7:00 pm

Globalization, the “Crisis” of Capitalism, and the Obama Presidency explores the renewed relevance of African and African diasporic perspectives in the discussion of current issues. The event features four top scholars of African and Africana studies who will discuss issues of race and identity against the backdrop of globalization and the new U.S. presidential administration. The symposium will also serve to commemorate a new chapter in the institutional life of FIU’s African and African Diaspora Studies (AADS) Program. The program has undergone three fundamental changes: the transformation of its name from “African-New World Studies” to “African &amp; African Diaspora Studies” to better reflect the research interests of its diverse faculty; the relocation of its main offices from FIU’s Biscayne Bay Campus to the Modesto A. Maidique Campus, and its inclusion within the newly formed School of International and Public Affairs in the College of Arts and Sciences. Following the symposium, AADS will host a West African Dinner-Soirée featuring traditional West African cuisine and cultural performances. Tickets are $30 per person and are available at the AADS main office, located on FIU’s Modesto A. Maidique Campus, LC 304, 11200 SW 8th Street, Miami. Seating is limited.

Amiri Baraka (formerly known as LeRoi Jones) is the author of numerous books of poetry, fiction, and nonfiction. He was named Poet Laureate of New Jersey by the New Jersey Commission on Humanities (2002-2004). His recent short story collection, Tales of the Out &amp; the Gone (Akashic 2007), was a New York Times Editors’ Choice and won a 2008 PEN Beyond Margins Award. With influences on his work ranging from musical orishas such as Ornette Coleman, John Coltrane, Thelonius Monk, and Sun Ra to the Cuban Revolution, Malcolm X and world revolutionary movements, Baraka is renowned as the founder of the Black Arts Movement in Harlem in the 1960s that became, though short-lived, the virtual blueprint for a new American theater aesthetic. The movement and his published and performance work, such as the signature study on African American music, Blues People (1963) and the play Dutchman (1963) practically seeded “the cultural corollary to black nationalism” of that revolutionary American milieu. He lives in Newark, New Jersey. Plenary 2: 10:50 am – 12:00 pm

Kamari Maxine Clarke is a professor of anthropology at Yale University where she serves as the Chair of the Council on African Studies. Her areas of research explore issues related to transnational religious and legal institutions as well as the recent growth of international rule of law movements and their impact on African states. Her research interests have taken her to intentional Yoruba communities in the American South, traditionalist religious and legal domains in Southwestern Nigeria, Ireland, London, Geneva, Banjul, and the United Nations. Recent articles and books have explored religious and legal movements and the related production of knowledge and power, including her books, Mapping Yoruba Networks: Power and Agency in the Making of Transnational Communities (Duke University Press 2004) and Fictions of Justice: The International Criminal Court and the Challenges of Legal Pluralism in Sub-Saharan Africa (Cambridge University Press, 2009). She is the co-editor, with Deborah Thomas, of Globalization and Race: Transformations in the Cultural Production of Blackness (Duke University Press 2006).

Carlos Moore, born and raised in Cuba, is an ethnologist and political scientist who has lived in exile for more than three decades because of his opposition to the racial policies of the Cuban regime. He holds two Ph.D.s from the Université de Paris-7 (France), one in Ethnology and the other in the Human Sciences. Fluent in five languages, Moore lived and worked in Europe for fifteen years, in Africa for eight (Egypt, Nigeria, Senegal), and in the Caribbean for eighteen. He traveled extensively in Southeast Asia and the Pacific on research projects. His career as an academic and researcher included posts as Visiting Professor at Florida International University and Senior Lecturer of international relations at the University of the West Indies (UWI), St. Augustine (Trinidad &amp; Tobago). Moore resides with his family in Brazil. He is an Honorary Senior Research Fellow in the School for Graduate Studies and Research, University of the West Indies (UWI) in Kingston, Jamaica. He is the author of Fela: This Bitch of a Life (1982 &amp; 2009); Pichón: Race and Revolution in Castro’s Cuba (2008); Castro, the Blacks, and Africa (1989); Cette Putain de Vie (1982); Were Marx and Engels Racists? (1972). He is also the principal editor of The African Presence in the Americas (1995). Plenary 4: 2:40 pm – 3:45 pm

F. Abiola Irele, formerly Professor of French, University of Ibadan, Nigeria, was for several years Professor of African, French, and Comparative Literature at the Ohio State University where he retired in 2003. He is currently Visiting Professor of African and African American Studies at Harvard University, where he also serves as editor, with Tommie Shelby, of Transition Magazine. Professor Irele’s publications include an edition of selected poems by the Senegalese poet and statesman, Léopold Sédar Senghor, a collection of critical essays, The African Experience in Literature and Ideology, and an edition of Aimé Césaire’s Cahier d’un retour au pays natal. He published more recently The African Imagination: Literature in Africa and the Black Diaspora (Oxford 2001), Négritude et Condition Africaine (Karthala 2008), as well as an edition of Chinua Achebe’s Things Fall Apart (Norton 2008). He is co-editor, with Simon Gikandi, of The Cambridge History of African and Caribbean Literature (2004), and a contributing editor to the Norton Anthology of World Literature. He is also editor of the recently published collective volume, The Cambridge Companion to the African Novel, and he has been editing, with Biodun Jeyifo, The Oxford Encyclopedia of African Thought. He was for many years the editor of the journal Research in African Literature.

Monopoly Capitalism and the Obama Presidency

An Identity of Passions

Tickets, $30 per person (seating is limited)

Tickets, $30 per person (seating is limited)

The symposium is free and open to the public; however, registration is required. To register for the symposium or to purchase tickets for the West African Dinner-SoirĂŠe, please contact: African &amp; African Diaspora Studies School of International and Public Affairs Florida International University 11200 SW 8th Street, LC 304, Miami, FL 33199 305-348-6860 | 305-348-4264 africana@fiu.edu | africana.fiu.edu