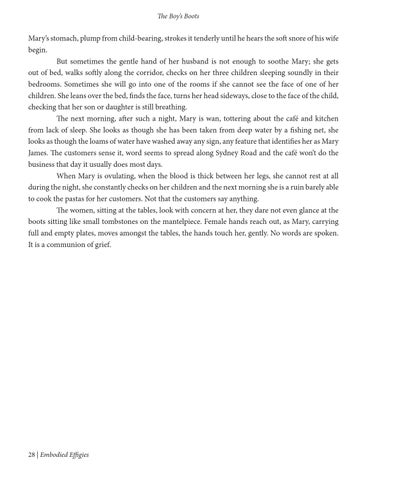 Mary’s stomach, plump from child-bearing, strokes it tenderly until he hears the soft snore of his wife begin. But sometimes the gentle hand of her husband is not enough to soothe Mary; she gets out of bed, walks softly along the corridor, checks on her three children sleeping soundly in their bedrooms. Sometimes she will go into one of the rooms if she cannot see the face of one of her children. She leans over the bed, finds the face, turns her head sideways, close to the face of the child, checking that her son or daughter is still breathing. The next morning, after such a night, Mary is wan, tottering about the café and kitchen from lack of sleep. She looks as though she has been taken from deep water by a fishing net, she looks as though the loams of water have washed away any sign, any feature that identifies her as Mary James. The customers sense it, word seems to spread along Sydney Road and the café won’t do the business that day it usually does most days. When Mary is ovulating, when the blood is thick between her legs, she cannot rest at all during the night, she constantly checks on her children and the next morning she is a ruin barely able to cook the pastas for her customers. Not that the customers say anything. The women, sitting at the tables, look with concern at her, they dare not even glance at the boots sitting like small tombstones on the mantelpiece. Female hands reach out, as Mary, carrying full and empty plates, moves amongst the tables, the hands touch her, gently. No words are spoken. It is a communion of grief. 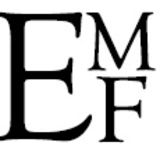