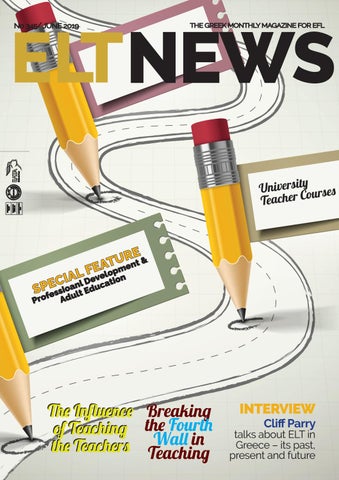 THE GREEK MONTHLY MAGAZINE FOR EFL

talks about ELT in Greece – its past, present and future

Cliff Parry talks about ELT its past, present and future ANASTASIA SPYROPOULOU anastasia@eltnews.gr

n the occasion of ELT NEWS’s 30th anniversary we are happy to publish a series of interviews from ELT personalities who have left their trace in the Greek and international ELT scene. Did you always want to become a teacher?

No, no way. It’s not that I’m ashamed of what I do. It’s just that it’s not what was planned. I went to university and studied mining engineering looking forward (?) to a career in the pits until

they were closed. Unemployed, in love (with a Greek), I packed my bags, booked a cheap charter and headed off for Athens in search of new beginning or a happy ending – I don’t know – in any event I think I found both – I went to bed with brickworks and rusting pitheads and woke up with a new lovers – a new profession and a new home under the eternal blue skies of Greece. What was the situation in ELT when you started teaching?

One thing was for sure – I had no idea how difficult teaching was and still is – but I suppose like countless unprepared souls before me and without doubt thousands to follow, I walked into my first class with childish confidence and an English teacher’s bible – a grammar book – a well-thumbed Thomson and Martinet with strange chapter titles like “Simple Present”, “Present Perfect” and “Adverbial Clauses”. I’d never seen such a book before and at the time it seemed to me that it should have been issued with a “health warning” – it’s rules and examples struck me with

clean a whiteboard. No tissues, no paper, no board cleaner – oh what the heck, I few broad strokes of my hand and the board was clean – my hand less so. Now it was September and like most Greek Septembers, it was warm –with no air-conditioning and only an old fan whirring and clattering away in the corner – cooling itself but not much else, the classroom was unbearably hot. Phew very hot I thought as I wiped the sweat from my brow. Very hot indeed – my class no longer had the energy to write. Phew I wiped the sweat away again. Why was Maria staring at me? Why was George staring at me and Rania too? Then it dawned on me …. my board-rubbing hand was surprisingly clean – the same could not be said of my face. Does routine teaching make teachers ‘lazy’?

Teaching touches the lives of others.

How much does a simple greeting touch the heart of the child as he/she walks into the class? Is the tired boy sitting opposite you influenced by a smile when your eyes meet? Routine doesn’t mean there is no challenge. Routine doesn’t make you lazy. The challenges are the same.

How do you see ELT in say…10 years from now?

What are the appropriate teacherstudent boundaries?

of the tool itself such as critical thinking,

Musicians love the sounds and the music they make, poets and writers love their words, dancers love movement and mathematicians love numbers. People who fundamentally love what they do don’t think of it as work in the ordinary sense of the word – they do it because they want to do it, they do it because when they do it, they can create – yes love breeds creativity and love of teaching not only creates great lessons but also great people. You’ve got to love the people in front of you.

Language is a tool and language learning necessarily involves not only acquiring knowledge and understanding of the language as a code but the skills and aptitudes that define an effective user the ability to analyse information, express opinions, take part in discussions and debates, negotiate, resolve conflicts and participate positively in society. The future of language teaching should not just provide an opportunity for practice of the code but reinforce the values and dispositions which govern society - respect for justice, democracy and the rule of law, openness, tolerance, courage to defend a point of view and a willingness to: listen to, work with

and stand up for others.

The Influence of Teaching the Teachers Marina Siskou EFL Teacher

upposing you hold the currently released ELT News issue, the present feature section must be of fervent interest to the readership.

Reasons for Prioritizing Lifelong Education and Skills Development Through educating oneself, the ESL/EFL teacher accomplishes an influential multi- faceted effect: 1. They essentially nurture their professional, educational development of their existent formal background education. The driving mentality of pursuing development in terms of studies and/ or profession

(interfacing factors) is to refresh, revise and be able to employ formerly acquired knowledge. Teachers aspire to rethink, reframe their learning and teaching methodology and update their approaches. 2. Through constantly bringing themselves to the L2 Lernerâ&amp;#x20AC;&amp;#x2122;s position- literally but mainly symbolically-they augment their real-classroom perception and responsiveness, which are deemed integral to the overall teacherâ&amp;#x20AC;&amp;#x2122;s performance. 3. In other terms, life-long learning conduces to

Breaking the Fourth Wall in Teaching When Forest Gump (Tom Hanks) sits on the bench offering chocolates to the listeners of his life story while this story is unfolded before viewers’ eyes, Forest breaks the so-called fourth wall convention. Fourth wall is a convention that best describes the relationship between the stage action – wherever this stage is set up – and the audience. It happens adopting the idea that the suspension of the disbelief, which is the acceptance that the truth of the stage action is fabricated for the purpos-

How can I become a better teacher? A review of teacher development approaches Evangelia Vassilakou MA in Applied Linguistics

ndoubtedly, change is inevitable in today’s life. Since development means change and growth, can outside change become the motive to personal development? Defining the term teacher development, it is “the process whereby teachers’ professionality and/or professionalism may be considered to be enhanced (Evans, 2010, p. 131) and professionality in turn refers to “an ideologically, attitudinally, intellectually and epistemologically-based stance on the part of an individual, in relation to the practice of the profession to which he/she belongs and which influences his/her professional prac-