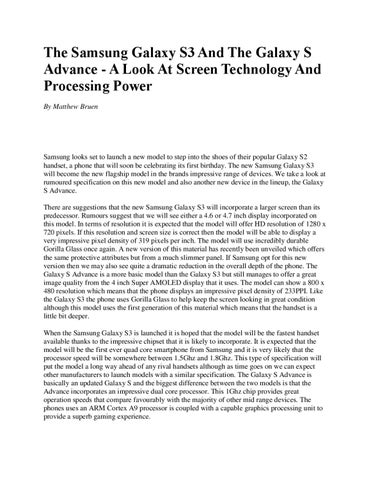 Samsung looks set to launch a new model to step into the shoes of their popular Galaxy S2 handset, a phone that will soon be celebrating its first birthday. The new Samsung Galaxy S3 will become the new flagship model in the brands impressive range of devices. We take a look at rumoured specification on this new model and also another new device in the lineup, the Galaxy S Advance. There are suggestions that the new Samsung Galaxy S3 will incorporate a larger screen than its predecessor. Rumours suggest that we will see either a 4.6 or 4.7 inch display incorporated on this model. In terms of resolution it is expected that the model will offer HD resolution of 1280 x 720 pixels. If this resolution and screen size is correct then the model will be able to display a very impressive pixel density of 319 pixels per inch. The model will use incredibly durable Gorilla Glass once again. A new version of this material has recently been unveiled which offers the same protective attributes but from a much slimmer panel. If Samsung opt for this new version then we may also see quite a dramatic reduction in the overall depth of the phone. The Galaxy S Advance is a more basic model than the Galaxy S3 but still manages to offer a great image quality from the 4 inch Super AMOLED display that it uses. The model can show a 800 x 480 resolution which means that the phone displays an impressive pixel density of 233PPI. Like the Galaxy S3 the phone uses Gorilla Glass to help keep the screen looking in great condition although this model uses the first generation of this material which means that the handset is a little bit deeper. When the Samsung Galaxy S3 is launched it is hoped that the model will be the fastest handset available thanks to the impressive chipset that it is likely to incorporate. It is expected that the model will be the first ever quad core smartphone from Samsung and it is very likely that the processor speed will be somewhere between 1.5Ghz and 1.8Ghz. This type of specification will put the model a long way ahead of any rival handsets although as time goes on we can expect other manufacturers to launch models with a similar specification. The Galaxy S Advance is basically an updated Galaxy S and the biggest difference between the two models is that the Advance incorporates an impressive dual core processor. This 1Ghz chip provides great operation speeds that compare favourably with the majority of other mid range devices. The phones uses an ARM Cortex A9 processor is coupled with a capable graphics processing unit to provide a superb gaming experience.

The two models that we have discussed should help to ensure that Samsung enjoy another excellent year. The Samsung Galaxy S3 looks like becoming the very best smartphone available while the Galaxy S Advance will appeal to consumer who may not want to pay a premium price for a top of the range model. Samsung looks set to launch a new model to step into the shoes of their popular Galaxy S2 handset, a phone that will soon be celebrating its...

Samsung looks set to launch a new model to step into the shoes of their popular Galaxy S2 handset, a phone that will soon be celebrating its...