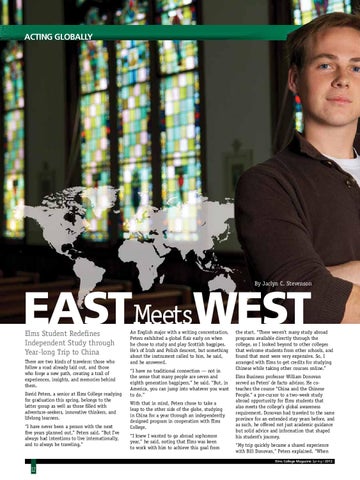 There are two kinds of travelers: those who follow a road already laid out, and those who forge a new path, creating a trail of experiences, insights, and memories behind them. David Peters, a senior at Elms College readying for graduation this spring, belongs to the latter group as well as those filled with adventure-seekers, innovative thinkers, and lifelong learners. “I have never been a person with the next five years planned out,” Peters said. “But I’ve always had intentions to live internationally, and to always be traveling.”

An English major with a writing concentration, Peters exhibited a global flair early on when he chose to study and play Scottish bagpipes. He’s of Irish and Polish descent, but something about the instrument called to him, he said, and he answered.

“I have no traditional connection — not in the sense that many people are seven and eighth generation bagpipers,” he said. “But, in America, you can jump into whatever you want to do.” With that in mind, Peters chose to take a leap to the other side of the globe, studying in China for a year through an independently designed program in cooperation with Elms College. “I knew I wanted to go abroad sophomore year,” he said, noting that Elms was keen to work with him to achieve this goal from

the start. “There weren’t many study abroad programs available directly through the college, so I looked beyond to other colleges that welcome students from other schools, and found that most were very expensive. So, I arranged with Elms to get credits for studying Chinese while taking other courses online.” Elms Business professor William Donovan served as Peters’ de facto advisor. He coteaches the course “China and the Chinese People,” a pre-cursor to a two-week study abroad opportunity for Elms students that also meets the college’s global awareness requirement. Donovan had traveled to the same province for an extended stay years before, and as such, he offered not just academic guidance but solid advice and information that shaped his student’s journey. “My trip quickly became a shared experience with Bill Donovan,” Peters explained. “When Elms College Magazine Spring | 2012 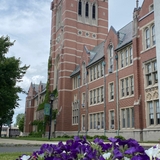