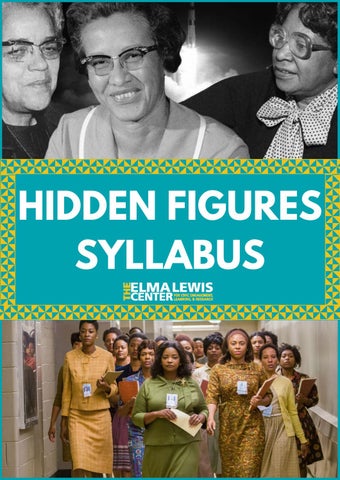 THE SYLLABUS Margot Lee Shetterly&#39;s non fiction work Hidden Figures chronicles the stories of Mary Jackson, Katherine Johnson, and Dorothy Vaughan, Black women mathematicians whose work was instrumental in NASA&#39;s early operations. Shetterly&#39;s research exemplifies the kind of care and dedication Black women and femmes have shown one another in celebrating our brilliance. The Hidden Figures syllabus intends to follow in this tradition, honoring the spirit of Elma Lewis, and uplifting the narratives of Black women and femmes who continuously defy constraints of gender binaries, class, ability among other things, not only in their ways of being in the world, but also in their intellectual and artistic production.

A DIFFERENT Over the past few years, the hashtag syllabus has become a way to organize and distribute information beyond the walls of academic institutions and platforms that require an affiliation to such institutions in order to gain access. Black women and femmes have been at the forefront of many of these efforts.

In 2014, Dr. Marcia Chatelain, Assistant Professor of History at Georgetown University, launched the #FergusonSyllabus to provide resources for students, educators and readers grieving and organizing in the wake of the murder of Mike Brown, one of many instances in which the United States demonstrates its nature as a machine requiring the lives of the most marginalized people as sacrifice and fuel for its continued operation.

The #LemonadeSyllabus is another example that served as a guide for our own work at the Elma Lewis Center. While working towards her doctorate at the Princeton Theological Seminary, Candice Benbow, with the help of over 70 contributors, curated an extensive reading list that firmly placed Beyoncé’s Lemonade visual album within the context of Black feminist and womanist literature, film, critical theory and theology.

Even with this such a wealth of inspiration, completing this project was fraught with endless questions, many of which remain unanswered in any conclusive way. Without the typical scaffolding and dated tasks and assignments that follow a particular line of logic and build on top of each other, our project doesn’t fully resemble a syllabus in its conventional form. One purpose the label “syllabus” serves is to align our work with the aforementioned project, and to invite readers to see Hidden Figures Syllabus as a guide to help in their exploration of Black diasporic creative productions. Another question that emerged had to do with which writers and artists to include in the document. It wouldn’t be very useful to select texts solely based on their creators identifying as Black women or femmes. Elma Lewis’ fierce spirit served as a means of navigating this dilemma. With Miss Lewis in mind, we tried to bring together works that are in conversation with each other, in the ways they project radical ways of thinking about liberation, joy, the body, sexuality, grief, and “post” colonial dispossession among many other themes. It is our hope that the Hidden Figures Syllabus reflects these ideas and lines of inquiry, with the blog (hiddenfiguresyllabus.com) as a space to continue questioning, dreaming and curating submissions from the public with more “Hidden Figures” who deserve celebration.

An arts educator, community leader, and MacArthur foundation â&amp;#x20AC;&amp;#x153;Geniusâ&amp;#x20AC;? grant winner, she promoted the arts as an empowering force for young Black people. Her legacy deserves center stage, now more than ever, as Black artists flourish in spite of underrepresentation in arts spaces and global structural oppression.

Miss Lewisâ&amp;#x20AC;&amp;#x2122; work involved shaping individuals who were more than exceptional singers, dancers, actors and musicians. She recognized that Black art held the power to fire up social change and to cultivate hope. Her tenacity and commitment to excellence is preserved and passed on in the memories and work of so many artists and activists who can all trace their artistic lineage to her training.

Elma Lewis: In Her Own Words Our role is to support anything positive in Black life and destroy anything negative that touches it. You have no other reason for being. I don&#39;t understand art for art&#39;s sake. Art is the guts of the people. The artist has always been society&#39;s most potent historian, educator, and spiritual advisor; the creator of our most precious treasures. Because of the scope of the artistic contributions, the potential for correcting human ills is immeasurable. It is not in the realm of luxury, but of necessity that the creative energies of the nation&#39;s population be nurtured and preserved for posterity.

Art is the wellspring, the cultural haven of a people. As long as any nation or any race of people continues to carefully define its lifestyle and preserve its heritage, it can inspect itself and grow.Â

When I leave here, the body of my work will be all these wonderful people out there in the world, doing great things.

Born in Boston to parents who emigrated from Barbados.

1944 Obtained her Masters in Education from Boston University.

Founded Playhouse in the Park in Boston’s Franklin Park, offering free summer performances that were revived in recent years continuing her work and her legacy.

Founded the National Center of Afro-American Artists (NCAAA), which brought students from the Elma Lewis School of Fine Arts to tour in stage productions on a national level.

Became one of the first women to receive a MacArthur Foundation “Genius Grant.” Images courtesy of Northeastern University Libraries, Archives and Special Collections

Dorothy Vaughan joined the Langley Laboratory in 1943, in a position she originally believed would last only until the end of World War II. The Laboratory soon began hiring Black women to meet an incredibly high demand for staff, and Vaughan was assigned to the segregated West Area Computing unit. She was eventually promoted to head the section, and went on to be a strong advocate for women computers facing issues with promotion and pay increases. Dorothy Vaughan was in charge of West Computing for nearly ten years. Along with the other West Computers, she was transferred to the new Analysis and Computation Division in 1958 when NACA became NASA, and segregated facilities were abolished. (Source: www.nasa.gov)

It Shall be of Jasper and Coral- Werewere Liking

I want to briefly complicate the notion of a hidden figure because I am not entirely comfortable with labeling Elma Lewis, Katherine Johnson, Dorothy Vaughan, Mary Jackson and the many women of color in our history as hidden. While a catchy title for a book or Hollywood film, the idea of being hidden is centered on a politic of erasure. Black women and women of color are often not the first mentioned when the heroes of Black History Month (think: Frederick Douglass and Martin Luther King, Jr). and Womenâ&amp;#x20AC;&amp;#x2122;s History Month (think: Eleanor Roosevelt and Gloria Steinem) are heralded. The premise of a hidden figure is someone who is not seen at all or even kept secret. As a critical pedagogue, I must ask the question: seen by who? Whose gaze is upon these women that classify them as hidden?

Give Us Each Day: The Diary of Alice Dunbar-Nelson edited by Gloria T. Hull

Redefining Realness: My Path to Womanhood, Identity, Love &amp; So Much More Janet Mock His Eye is on the Sparrow: An Autobiography Ethel Waters (with Charles Summers)

The Sisters Are Alright: Changing the Broken Narrative of Black Women in America Tamara Winfrey Harris

When Every Summer Is Your Own Personal &#39;Summer of Sam: &#39; On The Taking of Black Trans Women&#39;s Lives And How To Stop It Now Shaadi Devereaux Being trans* is becoming a black woman of complications Kat Kai Kol-Kes

Bittersweet Like Me: When the Lemonade Ain’t Made for Fat Black Women &amp; Femmes Ashleigh Shackelford Why I Can&#39;t Breathe as a Disabled Black Woman in America Vilissa Thompson

In this naming and claiming space for ourselves, do we stand to recreate the same kind of exclusion we have faced? Do we run the risk of acting as gatekeepers for (cisgender) Black womanhood, deciding whose voices and whose work should be celebrated in our project, and who is left out? Who will have difficulty gaining access to this digital archive and the text and visual materials we recommend? What about the Black women activists and academics whose work isn’t published and hasn’t been given the rubber-stamp of a (most probably) Western academic platform? Or the Black queer and trans women and femmes who are consistently erased from historical record and contemporary narratives?

Katherine Johnson was born in West Virginia in 1918, and was one of three Black students to integrate the state’s graduate schools. After graduating with highest honors in 1937, she taught at a Black public school in Virginia. In 1953, she started working in the Langley Laboratory at the National Advisory Committee for Aeronautics (NACA), where she was supervised by Dorothy Vaughan for four years. For the next 33 years, Johnson’s analysis and calculations would be used in several missions, including Freedom 7 in 1961, America’s first human spaceflight. She co-authored 26 research reports over the course of her career, and would become most known for her work on John Glenn’s orbital mission in 1962. President Obama awarded Katherine Johnson with the Presidential Medal of Freedom, America’s highest civilian honor, in 2015. (Source: www.nasa.gov)

Mary Jackson graduated from the Hampton Institute (now Hampton University) in 1942 with a dual degree in Math and Physical Sciences. She began work at the Langley Laboratory’s segregated West Area Computing section in 1951 where she spent two years reporting to Dorothy Vaughan. She went on to become NASA’s first Black woman engineer. She worked in this capacity for almost twenty years, but eventually left the engineering field after growing frustrated by the limits that were being placed on her career trajectory in terms of advancing to higher positions. She went on to take the role of Federal Women’s Program Manager at Langley, where she worked hard to ensure that a new generation of NASA’s women mathematicians, engineers and scientists were hired and given a clear path to career advancement. Source: (www.nasa.gov)

Queer African Reader edited by Sokari Ekine and Hakima Abbas An End to the Neglect of the Problems of the Negro Woman! Claudia Jones Demonic Grounds: Black Women and the Cartographies of Struggle Katherine McKittrick Gendered Realities: Essays in Caribbean Feminist Thought edited by Patricia Mohammed

I CAN&#39;T IMAGINE A MAN BRAVE ENOUGH TO OPPRESS ME.

The Elma Lewis Center for Civic Engagement, Learning, and Research was established in September 2013 as a coordinating hub for civic engagement at Emerson College and as a bridge builder to better connect the collegeâ&amp;#x20AC;&amp;#x2122;s strengths in communication and the arts to support social change. The Elma Lewis Center aims to facilitate learning and to conduct research grounded in women of color feminist thought and action. The Center seeks to encourage the college community to be active citizens engaging with diverse communities on a local, national, and global scale. The Elma Lewis Center is a non-profit organization, and the Hidden Figures Syllabus is intended for educational purposes only.

Margot Lee Shetterly's non fiction work Hidden Figures chronicles the stories of Mary Jackson, Katherine Johnson, and Dorothy Vaughan, Black women mathematicians whose work was instrumental in NASA's early operations. Shetterly's research exemplifies the kind of care and dedication Black women and femmes have shown one another in celebrating our brilliance. The Hidden Figures syllabus intends to follow in this tradition, honoring the spirit of Elma Lewis, and uplifting the narratives of Black women and femmes who continuously defy constraints of gender binaries, class, ability among other things, not only in their ways of being in the world, but also in their intellectual and artistic production. 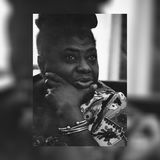