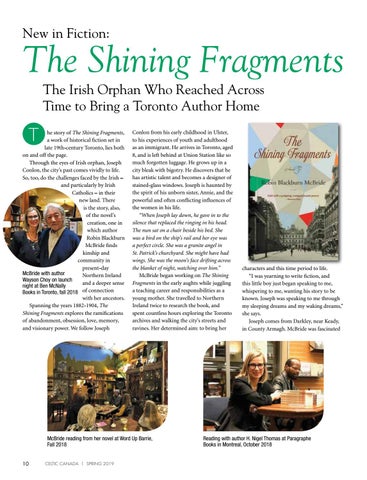 he story of The Shining Fragments, a work of historical fiction set in late 19th-century Toronto, lies both on and off the page. Through the eyes of Irish orphan, Joseph Conlon, the city’s past comes vividly to life. So, too, do the challenges faced by the Irish – and particularly by Irish Catholics – in their new land. There is the story, also, of the novel’s creation, one in which author Robin Blackburn McBride finds kinship and community in present-day McBride with author Northern Ireland Wayson Choy on launch and a deeper sense night at Ben McNally Books in Toronto, fall 2018 of connection with her ancestors. Spanning the years 1882-1904, The Shining Fragments explores the ramifications of abandonment, obsession, love, memory, and visionary power. We follow Joseph

Conlon from his early childhood in Ulster, to his experiences of youth and adulthood as an immigrant. He arrives in Toronto, aged 8, and is left behind at Union Station like so much forgotten luggage. He grows up in a city bleak with bigotry. He discovers that he has artistic talent and becomes a designer of stained-glass windows. Joseph is haunted by the spirit of his unborn sister, Annie, and the powerful and often conflicting influences of the women in his life. “When Joseph lay down, he gave in to the silence that replaced the ringing in his head. The nun sat on a chair beside his bed. She was a bird on the ship’s rail and her eye was a perfect circle. She was a granite angel in St. Patrick’s churchyard. She might have had wings. She was the moon’s face drifting across the blanket of night, watching over him.” McBride began working on The Shining Fragments in the early aughts while juggling a teaching career and responsibilities as a young mother. She travelled to Northern Ireland twice to research the book, and spent countless hours exploring the Toronto archives and walking the city’s streets and ravines. Her determined aim: to bring her

McBride reading from her novel at Word Up Barrie, Fall 2018 10

characters and this time period to life. “I was yearning to write fiction, and this little boy just began speaking to me, whispering to me, wanting his story to be known. Joseph was speaking to me through my sleeping dreams and my waking dreams,” she says. Joseph comes from Darkley, near Keady, in County Armagh. McBride was fascinated 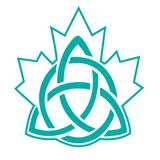