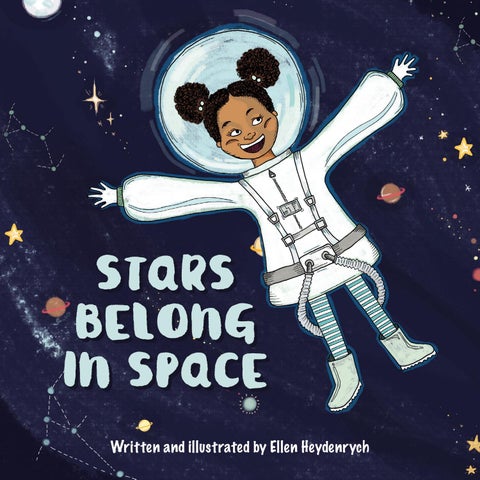 STARS BELONG IN SPACE Written and illustrated by Ellen Heydenrych

This book belongs to:

Stars Belong in Space Written and illustrated by Ellen Heydenrych Edited by Brian Garman With the help of Thingo Mthobeni, Binwe Adebayo, Anima McBrown and Mandisa Mpulo. This work is licensed under a Creative Commons Attribution 4.0 Licence (http://creativecommons.org/licenses/ by/4.0/). You are free to share (copy and redistribute the material in any medium or format) and adapt (remix, transform, and build upon the material) this work for any purpose, even commercially. The licensor cannot revoke these freedoms as long as you follow the following license terms: Attribution: You must give appropriate credit, provide a link to the license, and indicate if changes were made. You may do so in any reasonable manner, but not in any way that suggests the licensor endorses you or your use.No additional restrictions: You may not apply legal terms or technological measures that legally restrict others from doing anything the license permits.Notices: You do not have to comply with the license for elements of the material in the public domain or where your use is permitted by an applicable exception or limitation.No warranties are given. The license may not give you all of the permissions necessary for your intended use. For example, other rights such as publicity, privacy, or moral rights may limit how you use the material.

Written and illustrated by Ellen Heydenrych

Naledi tells Nkgono, “I’m going to go to space one day! I’m going to be an astronaut just like Mae Jemison was!” “You can do anything you dream, nana,” says Nkgono.

At school, Naledi’s teacher asks the class what they want to be when they grow up. “A doctor!” “A singer!” “A fireman!” shout the class.

“I’m going to be an astronaut!” says Naledi. “I’m not sure that will work, Naledi. Girls don’t usually become astronauts,” says her teacher, “Maybe you should think of something else.”

“Could I be an astronaut?” asks a boy in the class. “Yes, it’s more likely that you could be one,” says the teacher.

Nkgono points at the poster of Mae Jemison on Naledi’s wall. “But Mae Jemison was a girl and she became an astronaut!” says Nkgono.

“Do you know what your name means?” Nkgono asks. “It means star,” replies Naledi.

“That’s right! And where do stars belong?” asks Nkgono. “In space!” says Naledi with a big smile.

One day, some astronauts from Space Camp come to talk to Naledi’s class about an exciting competition. “Who wants to be an astronaut?” they ask.

“At Space Camp, you can enter a competition to win a journey to space,” they say. “To win the competition, you’ll have to be the best at four things: knowing the most about space, being able to survive without oxygen, floating around without gravity, and making your own space suit out of recycled stuff.”

Naledi studies very hard for the competition. She reads every book about space that she can get her hands on.

She even practises holding her breath.

“Why are you doing that, nana?” asks Nkgono.

And she makes herself a space suit!

All her hard work pays off, and Naledi goes to Space Camp. But when she gets there, the judges don’t think that she’s right for the job. “Tut tut,” “Will her hair fit in the helmet?” “I wonder if she has practised enough,” they say.

This makes Naledi very nervous, but she remembers what Nkgono told her. She whispers to herself, â&amp;#x20AC;&amp;#x153;My name means star, and stars belong in space!â&amp;#x20AC;?

Naledi proves to the judges how much she has practised.

She shows them everything she has learned.

She floats in zero gravity.

And she presents the space suit she has made.

Even though they weren’t sure that Naledi was right for it at first, the judges now think she’ll make a fine astronaut. “Well done, Naledi! We’d like you to go on our next space journey,” they say.

Everybody watches from earth as Naledi zooms towards the stars.

Nkgono smiles as Naledi’s rocket ship becomes a small dot in the sky. “Naledi means star, and stars belong in space!” she says.

About the Author “Ellen Heydenrych is a young designer whose art portrays youth and the power of feminism in a whimsical way.” – South African Garden &amp; Home Magazine. Heydenrych is a multi-skilled media practitioner, studying towards her Master’s Degree in Journalism and Media Studies at Rhodes University. She completed her Bachelor of Journalism specialising in Communication Design in 2017, graduating with distinction. She has contributed writing, illustrations and graphic design work to publications such as The Mail &amp; Guardian, The Oppidan Press, Cue Media and The Sunday Times. In collaboration with Book Dash, she illustrated ‘Mali’s Friend’ written by Rujeko Moyo and designed by RJ Palmer.

Naledi loves counting the stars at night and dreams of being an astronaut. Her teacher doesnâ&amp;#x20AC;&amp;#x2122;t think she should reach for the stars. But Naledi knows what her name means. 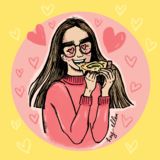