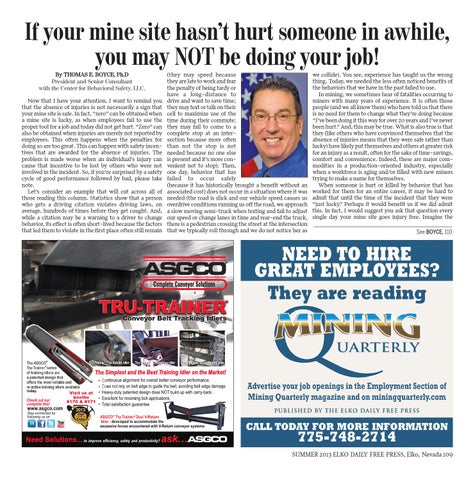 If your mine site hasn’t hurt someone in awhile, you may NOT be doing your job! By THOMAS E. BOYCE, Ph.D President and Senior Consultant with the Center for Behavioral Safety, LLC.

Now that I have your attention, I want to remind you that the absence of injuries is not necessarily a sign that your mine site is safe. In fact, “zero” can be obtained when a mine site is lucky, as when employees fail to use the proper tool for a job and today did not get hurt. “Zero” can also be obtained when injuries are merely not reported by employees. This often happens when the penalties for doing so are too great. This can happen with safety incentives that are awarded for the absence of injuries. The problem is made worse when an individual’s injury can cause that incentive to be lost by others who were not involved in the incident. So, if you’re surprised by a safety cycle of good performance followed by bad, please take note. Let’s consider an example that will cut across all of those reading this column. Statistics show that a person who gets a driving citation violates driving laws, on average, hundreds of times before they get caught. And, while a citation may be a warning to a driver to change behavior, its effect is often short-lived because the factors that led them to violate in the first place often still remain

(they may speed because they are late to work and fear the penalty of being tardy or have a long-distance to drive and want to save time; they may text or talk on their cell to maximize use of the time during their commute; they may fail to come to a complete stop at an intersection because more often than not the stop is not needed because no one else is present and it’s more convenient not to stop). Then, one day, behavior that has failed to occur safely (because it has historically brought a benefit without an associated cost) does not occur in a situation where it was needed (the road is slick and our vehicle speed causes us overdrive conditions running us off the road, we approach a slow moving semi-truck when texting and fail to adjust our speed or change lanes in time and rear-end the truck, there is a pedestrian crossing the street at the intersection that we typically roll through and we do not notice her as

we collide). You see, experience has taught us the wrong thing. Today, we needed the less often noticed benefits of the behaviors that we have in the past failed to use. In mining, we sometimes hear of fatalities occurring to miners with many years of experience. It is often those people (and we all know them) who have told us that there is no need for them to change what they’re doing because “I’ve been doing it this way for over 20 years and I’ve never been hurt.” And, this may be true. What is also true is that they (like others who have convinced themselves that the absence of injuries means that they were safe rather than lucky) have likely put themselves and others at greater risk for an injury as a result, often for the sake of time-savings, comfort and convenience. Indeed, these are major commodities in a production-oriented industry, especially when a workforce is aging and/or filled with new miners trying to make a name for themselves. When someone is hurt or killed by behavior that has worked for them for an entire career, it may be hard to admit that until the time of the incident that they were “just lucky.” Perhaps it would benefit us if we did admit this. In fact, I would suggest you ask that question every single day your mine site goes injury free. Imagine the See BOYCE, 110